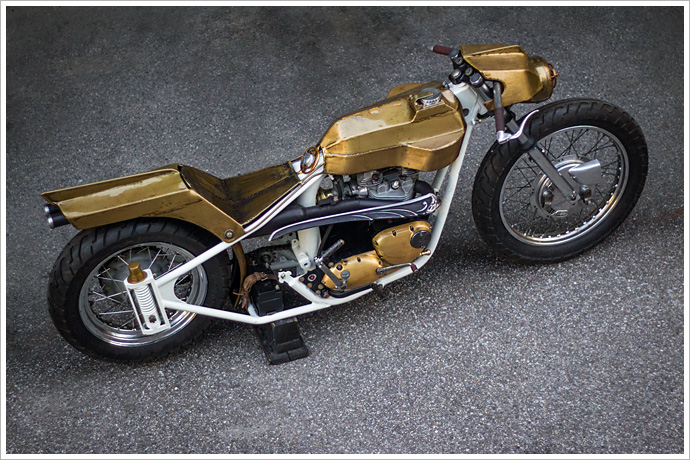 Of all the inventors that have taken their place in the annals of history, few have had quite the impact that Nikola Tesla has. Along with the many real-life inventions he patented or designed for others, Westinghouse and Thomas Edison included, there’s a slew of wild rumours that have become associated with the man. Some say that he invented a machine that could display thoughts like a mental movie projector. Others say he mastered the technology to transmit electricity wirelessly like radio waves. All we can safely say now is that the man understood and saw things on a level us mere mortals could only dream of. Which brings us to the latest creation of Jeff Yarrington’s Saint Motor Company. Now, we’re not saying that Jeff’s a mad genius or anything, but let’s face it, anyone who can conceive of and build a bike like this has to be more than a little Dr. Emmet Brown upstairs, yes? Here’s the Doc Jeff. “The Tesla Bike was a Project started a couple years ago. I had started reading about Nicola Tesla, and was amazed by his work, and what it would have meant if finished. He was doing stuff 100 years ahead of his time, literally. Anything to do with motors, generators, x-rays, lasers… it all stemmed from Tesla, but those items pale next to what his main goal was. People have tried to finish what he started, but have always stopped short.” “I imagined if he had a taste for Motorbikes and built one what it may have looked like. I had Captain Nemo, Rocketeer, and others floating around in my head too. I tried to stay period-ish correct with details, and wanted it to look a bit more hand built, with reused parts. There are more then a few re-purposed parts mixed in.”

“First and foremost was that I always wanted to make a bike with a fin on the rear and exhaust under it and second, I had always wanted to do a construction like this. A steel bar body skeleton, followed by a skin of metal to mimic blimps a bit or old sidecars, that kind of a look.” “Its base is a 1972 Triumph Tiger, the first year for oil in Frame. I bought the bike from the original owner who had already added the Amen tail section and chopped it up a bit. He rode it for years, and then put it away, long ago. The single boxed muffler is a first for me, I copied a flowmaster 2 in 2 out chamber design for a unique sound. Theheat shields are cast iron, the copper and brass compass is the GPS, there’s many little details that I tried to not be normal with, even the weld on tabs are cut to be a reminder of old.” “Now, it’s reborn again as Tesla, a very different kind of bike. I was very lucky to have this bike be the first on my projects to be professionally photographed and have people interested in it before it was done, and help with things.” “I’d like to thank Sasha from Caferacerxxx for doing Sasha stuff, and Alicia Elfving, aka the Motolady for doing the beautiful photos, and for shooting an amazing video. Thanks.”