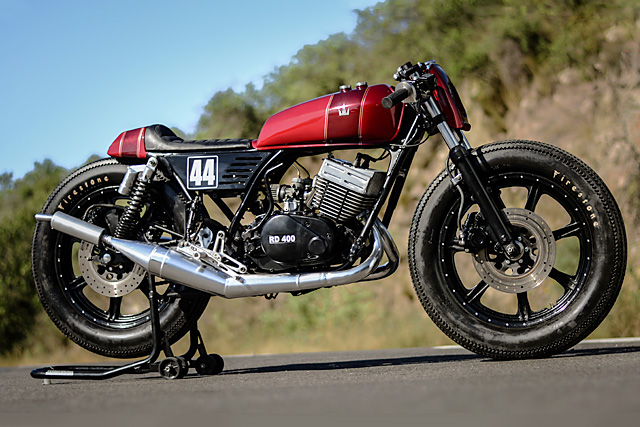 If motorcycles have earned the reputation as “widow-makers” then two motorcycles in particular can lay claim to being the most lethal assassins. Both are ’70s Japanese bikes from the golden age of two-strokes; the Kawasaki H2 750 is the Ivan Drago-style killer that will get right in your face and club you to death. But it’s the Yamaha RD400 that takes on the true Assassin’s creed, dispatching of its kill in a millisecond without the prey ever having seen what was coming. In Argentina, the land of bike builder extraordinaire and founder of Lucky Custom, Lucas Layum, the RD400 has been known since its birth as “la Mata Hombre”, quite literally “the Man Killer”. But such is the allure of the RD and its intoxicating two-stroke engine, that men will risk death to ride them and when they look this good it’s easy to see why. This particular RD400 is the Daytona model, the last air-cooled two-stroke to be sold in the America’s and Yamaha decided to go out with a bang. “Although Yamaha intended the Daytona to commemorate its racing successes of the previous year, this bike ended up as a monument to the 2-stoke motorcycles that defined an era,” was how it was described at the time and while in many markets consumers were already converted to the big capacity fours, in Argentina the cult following of the last RD lives on to this day. It’s easy to see why, it was cheap to buy, easy to fix and went like a scalded cat.

Of course it also had a habit of leaking oil, being noisy as hell and if you lived in a built up area made you as popular as a dose of the clap. But if fitting in was what we bikers cared about we wouldn’t be bikers at all. So Lucas set about building the most badass RD around and has used all his tricks to knock it out of the park. With a Daytona model acquired the first task was to take it down to a bare frame and start sitting tanks on the back bone. Out of a collection of old tanks in the Cordoba shop the right one was found and it’s from these basic lines that drives the entire design.

The frame was then flipped over and ground smooth, removing all of the unnecessary brackets. And with the grinder still spinning the rear end was shortened to create a more compact piece. With the tank sat back up on the bike the tail section is hand formed steel to mimic the back of the tank and create one harmonious line from front to back. Knowing he was going to “lower the height to the floor” the tail section was notched to allow the tyre a little more travel. While the fenders have both been tossed aside and their mounts kindly shown the door.

Wanting the cleanest of looks Lucas then took a cutting wheel to the fuel tank and made a separate chamber for the oil. The only visual sign now is the twin milled aluminium caps that sit atop, one for fuel and one for oil. Having cleared up so much room allowed for the artistic side to take over at the Lucky Custom workshop. The hand formed side covers feature louvered vents and neatly rolled steel edges. While the last of the body work is the mask like headlight surround that shields the BMW auxiliary light illuminating the cool Cordoba night air.

Having previously built a series of bikes Lucas called “los Diablitos racer” Lucas drew inspiration from the devilish series to formulate a fitting paint combination. The glossy blood-red is broken up by a candy apple metallic in a darker version of the same hue. To really make it pop the last few coats have silver and gold flake mixed in. While silver and gold pinstripes are used to separate the two reds and Lucky Custom logos machined and fitted to each side. But let’s be honest, what makes the RD400 Daytona the bike it is comes down to this; 398cc of two-stroke madness! Thanks to air-cooled, twin cylinder with reed valve torque induction the little smokey can lift the front wheel in just about any gear. You can’t simply look at the spec sheet to understand the Daytona’s insanity. You have to ride one hard, hear one scream and have it try to highside you over the handlebars.

Too make sure the smoker will run sweetly for years to come the engine has been completely rebuilt from top to bottom. The twin Mikuni carbs draw their air through a set of pod filters. While expelling the gas is left to a pair of absolutely gorgeous hand-built expansion chambers that have been polished to perfection. Lucas made a custom plug cover to give the engine a meaner look, while the rest of the block is either painted in black or file finished. Sitting atop the frame is a custom seat pan that narrows the bike between the rider’s legs. And finished in black leather and roll stitched car seat material it’s a perfect match for the twin red paint combo. But it’s still that engine that keeps Lucas smiling perched on the RD “Two-stroke engines have been disappearing over the years, but they keep the sound and the smell so nostalgic of the races of those beautiful times.” Wanting to capture a little more of that racing period he gave the bike a set of race numbers in white on each side panel. But having always envisioned the bike as close to terra firma as he could get it, the time came to attack the suspension. The front telescopic forks have a spring upgrade with progressive items moving through stanchions that have been lowered through the trees. While out back a set of stiffly sprung remote reservoir shocks have been fitted up to match. The braking remains as it was from the factory; but both front and rear discs have been drilled for a little extra cooling. Just like the lower fork legs, brake calipers and rear springs the factory alloy wheels have been sprayed black. But for a big dollar effect done for nothing at all they’ve had a series of holes slightly counter sunk to expose the raw alloy. Wrapped in the always controversial vintage Firestone rubber, the RD remains the point and shoot bike it was always meant to be. A set of clip-on bars bring the rider even closer to the ground and the quick action throttle keeps that two-stroke singing.

The only instrumentation needed is mounted centrally between the upper clamp, a big tacho for one of the fastest spinning engines money can buy. To aide in grabbing the next gear before redline Lucas made a set of custom rearsets, but they weren’t without their challenge. “The most difficult part of the construction was the adaptation of the racing pedals since this bike has kick-start and needs the lever to lower to turn the motor, the challenge was the articulation of the lever to not bump into the pedals on the way down.” The last job was to drill the tail section to mount a set of LED tail lights… it makes it easier for those trying to keep up to see the RD in the distance. Old smokers are not something that the Lucky Custom team get to tackle every day, but with the long-held love for them in Argentina it’s a project Lucas is keen to tackle again. Of course every bike this brilliant deserves a name and what else from Japan hits you upside the head quite so hard as “Sake”. Perfect.