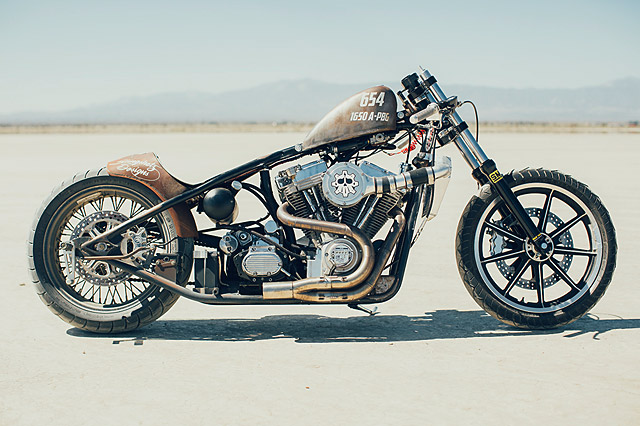 There’s some things that most of us would take for granted if we were intending to break a land speed record. Obviously an endeavour like that would take a lot of money – so you’re probably going to need a sponsor or twelve. And you’d also be wanting a whole bunch of top shelf engineers and support crew, too. Not to mention a brand new bike and some seriously hardcore safety gear. You getting this all down? Great. Now tear the list up and come salt flat racing the Chris Bridgewater way – on a wing, a prayer and a blown, 171 HP, S&S equiped Harley. Here’s Mike Quinones from ourcaste.com. He’s a friend of ‘Bridge’ and was fortunate enough to see the bike in action. “I can’t imagine sitting inches off the ground, completely exposed to the elements, straddling a 171 HP, and ripping at 200 mph across a barren dry lake bed… but I have a friend that can. Chris Bridgewater pilots this Harley Davidson, Pro Charger equipped land speed bike that pushes him to those absurd speeds; and all while we looked on in amazement.” “We showed up to El Mirage last weekend to put some shake down miles on this behemoth of home-built engineering. The bike was freshly off the dyno at Bennet’s Performance, with the hand of none other than land speed legend Wink Eller tuning it.” “From the moment this bike turns over you know it has one purpose; to absolutely obliterated speed records. The bike moves across the miles of open desert at such an incredible speed that it’s difficult to track it at times. As Bridge clicks each gear, the parched lake bed floor is shot out from under the tire as it struggles to make traction. The pound of the exhaust and the whine of that Pro Charger becomes hypnotic.”

The bike is running fully worked Sportster forks at the front with a hard rear. The motor is a 100 cubic inch S&S Evo lump, pumped full of horsey goodness via a Pro Charger system with a bespoke intercooler from Chris himself. It’s running at 14 pounds of boost at 7000 RPM and the bike has been dyno’d at a rather impressive 171 equestrians. Carbs by the house of Mikuni. Elsewhere you’ll find a Rev Tech 5 speed box, Tarrozi rear sets, a modified Sportster tank and some freshly shaved Metzeler ME880s.

“Bridge is an independent, meaning he doesn’t have some corporate machine fueling his land speed dream. He’s built this bike with his hands and hard-earned cash, and the occasional support of his friends and anything that they can contribute.” “All in all, he’s what the true heart of bike racing is. And he’s what will continue to keep the sport pure. Remember, support the Independents!” Burt Munro, eat your heart out.