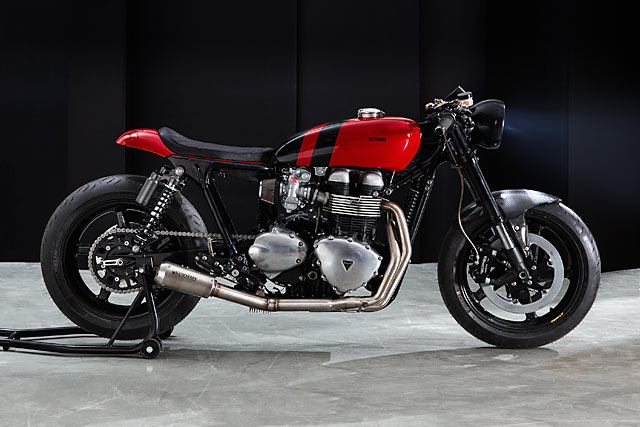 Think the ol’ 865cc Thruxton was too fat, too heavy and too slow to be interesting? Thankfully Parisian workshop ‘Bad Winners’ have something for what ails ya – a bantamweight Thrux that’s so light and sexy you’d think it just eats salad. Here’s the second of five bikes in a similar vein, a 2015 Triumph Thruxton dubbed ‘Zero Gravity’. That’s right – this is the second of five bikes Bad Winners are producing that are essentially the same. While most shops bounce from build to build, cutting and shutting and reworking all manner of models, Bad Winners run at a Germanic-level of efficiency. They figure out what the bike is going to look like, what mods they want to make and set about building five of them.

Head of the workshop, Walid Ben Lamine, says that this process allows the build to progress extraordinarily smoothly. ‘It’s all pretty simple now,’ he says, ‘Everything has been designed on the computer. Everything has already been laser cut and figured out.’ And what he’s figured out is an exceptional little performance-oriented Thruxton smacked with some incredible details. Take the engine – the 2015 Thruxton came with a grumbling EFI system that has now been replaced by a pair of Keihin CR35’s. The guys at Bad Winners also show they’re smarter than a bag of Einsteins – the brains of the EFI system was replaced by a programmable CDI box designed and made in-house. ‘That allows me to have a very minimal wiring loom,’ Walid explains. The spaghetti mess of standard wiring has been further trimmed with a full Motogadget rig – a Chrono speedometer, M-Unit control box and M-Unit commands. But the real highlights aren’t hidden away… Those mag wheels? They’re bespoke carbon fibre Dynomags mounted to Daytona 675 USD forks. We don’t have hard and fast figures on how much they’d weigh, but I’d be inclined to lean towards the ‘stuff all’ side of the equation. Suspension at the rear is handled by Bitubo units, while stainless steel brake lines run into ultra-high quality Beringer braking components. Air is sucked in through a pair of K&N air filters and spat out of a two into one Spark exhaust system. So make no mistake, this Thruxton is designed to ridden. And to look good.

It runs a new carbon fibre front fender, neat seat section with soft ribbed stitching. The standard gas tank looks all warped and distended like it’s drunk a dozen beers, so it was replaced with one from a Yamaha SR400, which was cut and modified to fit over the much thinner frame. The end result is a bike that looks as light as it is to ride.

[superquote]“The standard gas tank looks all warped and distended like it’s drunk a dozen beers, so it was replaced with one from a Yamaha SR400”.[/superquote] ‘Riding the bike is insane!’ Monsieur Lamine says, ‘It’s so light and so hard at the same time.’ So, it’s faster, stops better, handles better and looks damn good. And best of all, there’s five of them. What’s not to like?