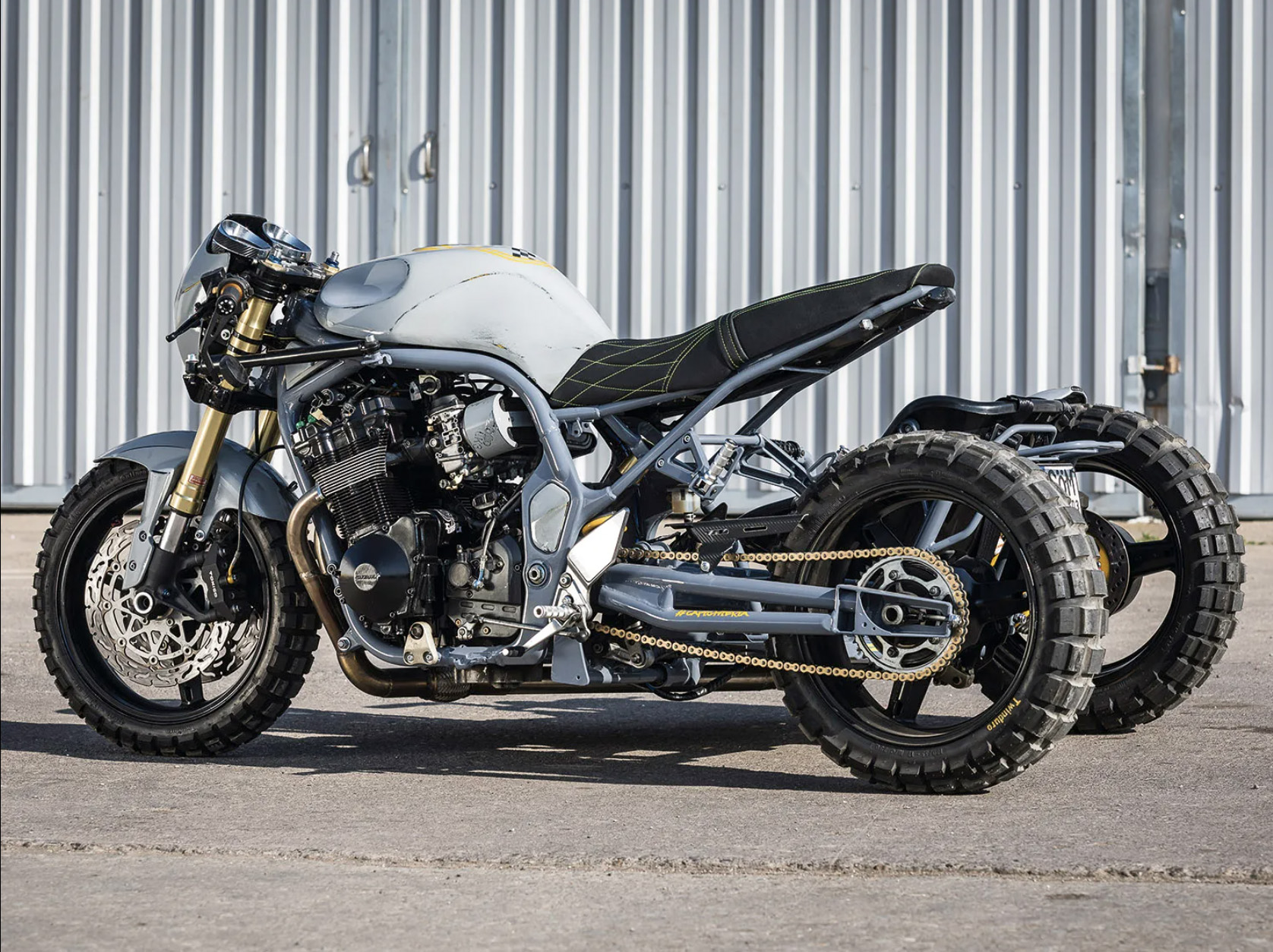 Millions of people own and ride motorcycles as a form of transport, but a much smaller group in that mix are true bikers; who live and breathe absolutely everything two-wheels. This latter group has gasoline pumping through their veins and from the way they dress, to the people they spend time with and the places they hang out, its bikes, bikes, and more bikes. And few come as committed to this passion as Marco Eckardt who doesn’t own so much a workshop, as he does a place that is a shrine to wrenching on custom machines. Known as Cafighteria, it’s where he builds his “Psycho Motorcycles” and this Suzuki Bandit with a sidecar is the machine that took him and his wife to be down the aisle.

Marco lives, rides, and wrenches in Kindelbrück, central Germany, and he is all about big horsepower and handmade machines. From custom v-twins to brutal Suzuki streetfighters, he’s made a name for himself as a free thinker who rides hard, enjoys a beer, and has exceptional skills with a welder. Back in 2017 he won the Star Wars category at the Glemseck 101 1/8th mile races on his GSXR1100, and it was also at the start line of the Glemseck that he got down on one knee and proposed to his then-girlfriend, Sophia. With a big smile and a yes, there was a wedding to plan and Marco wasn’t going to be arriving at the chapel in a car.

But you can’t exactly ask your bride to be, to risk her life and that big dollar dress on the back of one of your insane two-wheeled machines, especially when you describe them all as ‘Psycho’, so Marco had a plan. He’d build himself a tasty Suzuki Bandit, and craft a sweet custom sidecar for her. Getting his hands on a Bandit wouldn’t be an issue, hell his workshop is usually filled with the favourite model in all manner of custom configurations, but a sidecar to suit would prove to be the tricky part. After a long search, he came across one that had been built for a BMW 1200 and it seemed like the way to go.

There were however two problems, the first is Germany’s rather tough road registration laws that meant the whole three-wheeled vehicle would have to be built to the highest of standards to get the Government tick of approval. The second problem, the sidecar meant for the BMW was built to a terrible standard, with Marco estimating 90% of it was not up to scratch. So with a hacked-up Bandit as a donor, that sidecar, and an examiner checking in on his work, it was time to get busy. The steel bodywork on the car was pulled off and the frame was rewelded and given new bracing throughout to make it safe.

The next step was a little slice of genius, Marco decided to weld up a pair of matching swingarms for each machine, and not only do the finished products look incredible, but the extra length on the Bandit unit also helps to stabilise the whole setup. The next step was to design the mounts that would bridge the gap between the two vehicles and allow for the geometry to remain safe, even at the absurd speeds that Marco had in mind. Finally, to get the whole thing rolling, a host of suspension parts were donated from GSXRs, with a mono-shock for both the bike and sidecar and a set of USD forks to give the bike the beefy look.

Also taken from the GSXR parts bin is the all-important stopping power in the form of big twin discs and Tokico calipers, and all three wheels. Meaty Continental Twin Duro rubber gives the whole combination a tough as nails appearance, and a custom hub for the car to finish out the roller. To keep husband and wife comfortable meant all new seats, and Marco fabricated a custom subframe for the Bandit and then used a lightweight racing Go Kart seat for the car. Both seats and the floor of the car are then upholstered by good friend Ben, in black with yellow stitching.

Time for the bodywork and the bike wears a fibreglass front fender and the car has a handmade steel fender over the big rubber, with a frenched in taillight. The car also gets a neat front end that has hints of ’30s Ford and is finished off with a custom grille. The Bandit was treated to a host of small side covers and a custom cowl to shroud the new front headlight, while the car has its own lighting mounted on a support that also includes a very clever handlebar for the passenger. Marco does all of this incredible fab work himself and then grabbed the paint gun to lay down all of the colour and graphics.

As a man with a love for speed, Marco wanted the outfit to be able to hit 180km/h, so the engine gets tuned carbs and a custom built air feed. Next on the list was a full exhaust system, and the stainless header pipes run sideways to a flex joint, before crossing the underneath of the car and spitting flames out of a race style muffler. To keep the big girl cool, stainless braided oil lines were added and the cooler is cleverly hidden behind the car’s grille. With the tick of approval from the examiner and a license plate on the back, Marco rode his new wife Sophia to their wedding in style.

Burnouts were a big part of the event, and the project has proven to be a big hit, with Mr. Cafighteria’s once bike shy daughter, now insisting the three-wheeled Bandit shows up for the school pick-up!