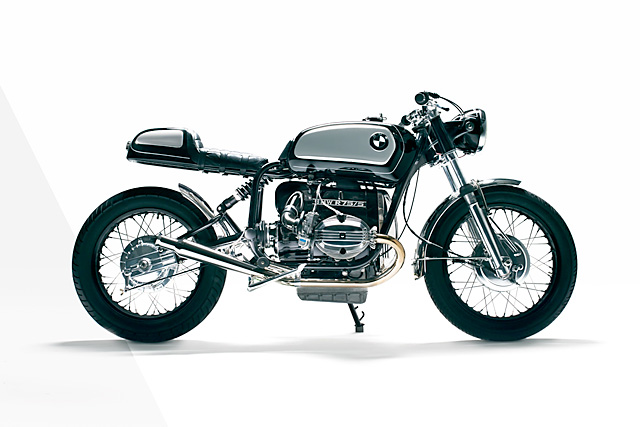 If you’ve been building motorcycles for a long time, you will start accumulating parts like a housewife collects Tupperware. My garage, for example, is full of old parts I have taken off, upgraded, bought cheap at swap meets or had thrown in when I’ve purchased a bike – it’s damn hard to say no to free spare parts, right? Like many builds featured on these pages, the Bavarian Knight began as a big pile of metal from a multitude of different bikes. The owner, John Yeosock, initially purchased a stash of old cast-offs from John Landstrom at Blue Moon Cycles. Then, not knowing what to make out of all the random parts, he contacted Bryan Fuller from Fuller Moto in Alanta to see if he could help. Together, they went back to John’s warehouse and rummaged through all his bits and pieces until they had picked up all the parts they felt they could build a modern, yet classic BMW cafe racer. Starting with a 1975 BMW R75/5 750cc donor, Bryan and his team really wanted the bike to have a distinctly minimalist design aesthetic. “We wanted to build something that could have originally come from the factory back in the 70’s, but with modern touches,” says Bryan. “That era of Beemers were some of the most beautiful bikes built. The BMW engine and parts are really clean the way they designed them back then, which is very much in line with how Fuller Moto approaches design today.” One of the most challenging parts of the build was extending the swingarm. The team had to cut the metal in the front of the swingarm in order to get the boot to line up just right, as well as keep the original boot intact. In the end the swingarm was lengthened by 2″ to make way for a performance FOX Shox mono shock. You can’t have a classic-looking café racer without a beautiful hump seat. The Fuller Moto team cut off the old dual shock mounts and made a new tail section out of chromoly, then they took the toaster tank shape and tried to emulate it the best they could with the new tail’s design. They ended up making the sides of the unit out of polished aluminum using a beautiful ’53 Buick porthole light for the brakes. They also made a stunning aluminum polished tank that looks like it was delivered fresh from the Bavarian factory. To continue with the recycled theme, the seat was made from a lived-in, vintage leather jacket. The guys say it had just the right amount of wear to become the basis for the seat. The pleats in the seat are the lower part of the jacket and the snaps on the sleeves are what now hold the seat on. Genius. They say the devil is in the detail, and it couldn’t be more true with The Bavarian Knight’s gas cap. “We decided to emulate the latch system used for the Grolsch beer bottles,” says Bryan. “We made the cap out of aluminum and cut out our own gasket. ‘Super B’, our lead fabricator, made the cap by hand out of stainless.” Just like the gas cap, the attention to detail extended right through to the unique custom stainless exhaust hangers that suspend the martini-glass mufflers perfectly. The classic-looking front fender is from a Vincent – and yes, they left that stock. To keep the bike minimalist but still modern, the cabling was replaced using American Autowire vintage stock. The battery was swapped out for a smaller Speedcell Lithium unit and electronic ignition was added.

The end result is an elegant BMW café racer that is as timeless as Gone With The Wind, but with some modern touches. Bryan Fuller and his team at Fuller Moto have knocked it out of the park again, creating a steed that is truly fit for a king.