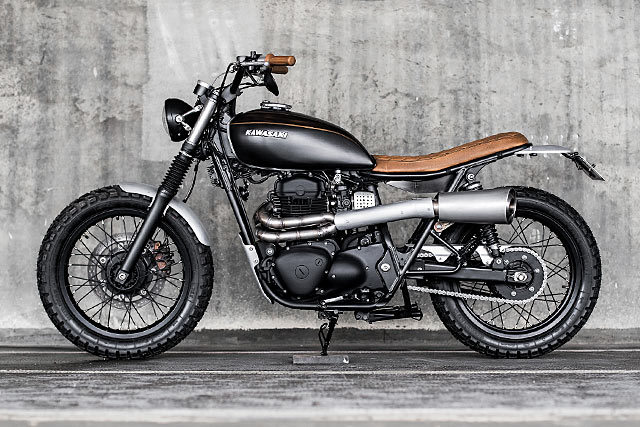 Most of you can jump onto Craigslist or eBay, rock up to a darkened car park, meet a stranger and take home a project bike of your choosing. It can be old, it can be Italian, it can be American, it can be British. Living in the West rocks. But we’re not all that lucky. Some shops, like Belarus’ Recast Moto, have to look much further afield for a donor bike, as they did with this exceptional Kawasaki W650 scrambler. It turns out that Belarus, formerly part of the Soviet Union, isn’t exactly overrun with potential donor bikes for builds. Which was unfortunate for Recast Moto’s client, who approached Matiz Lemark with a specific set of requirements for the project. It needed to have the looks of a classic bike, had to be more than 500cc’s and be capable of blatting around town and occasionally up and into some mud for scrambling. But there’s a huge problem when trying to find a classic bike in Belarus. There aren’t any.

[superquote]“But there’s a huge problem when trying to find a classic bike in Belarus. There aren’t any.”[/superquote]

‘In our country we don’t sell classic motorcycles,’ Recast Moto founder Matiz Lemark explains. ‘For all bikes like that we have to look outside our country – to Germany, Poland, Lithuania, the Netherlands and Italy.’ So Matiz and his team had to be strategic about what they were going to work on. They landed on the evergreen Kawasaki W650. ‘It’s a great option for a beginner,’ Matiz explains, ‘It’s not too powerful, it’s very beautiful, relatively new and a lot of projects have been built on this model before.’ But where do you find a cult Japanese bike in Eastern Europe? The same place you find caviar, vodka and men in tracksuits punching each other in supermarkets: Moscow. 700 kilometres away in Russia’s capital there was an importer who specialises in shipping over used Japanese motorcycles. Luckily, they had a W650 on hand.

‘It was in good condition,’ Matiz says, ‘with no real visible problems. But the previous owner had covered all the removable parts with a Raptor hard coating, which turned out to be around 5mm thick. We had to soak it in a barrel of acetone for three days. As a result, we had to repaint many parts.’ The team moved onto some sketches of the ideal end result, which Matiz says is very close to the scrambler you see on these pages. But there were problems along the way. The ultra-reliable W650 engine was burning through oil, so the whole 676cc bevel-driven twin came apart for inspection. But on disassembly three engine studs were left stripped which had to be drilled and replaced. The Recast Moto guys replaced all the gaskets and put it back together, with a new set of pistons and rings. On the exterior, the large standard fuel tank was replaced by one from a 1976 Kawasaki KZ400, possibly the only part of that bike worth hanging onto. Under the new tank, the frame was shortened and modified to match the slimmer lines of the new KZ400 part, with an underslung stainless steel battery box holding much of the W’s wiring. The electrical components are some of the nicest touches on the build, with custom-made front LED turn signals and a tidy LED headlight. The switches are backlit, and all the wiring runs through the handlebars. The list of modifications doesn’t end there, with the scrambler running a new 18” front rim, T&T instrument panel, short brushed fenders stamped with the company logo and, best of all, a gorgeous 2-into-1 stainless system that ends in a muffler from a BMW S1000 can. Oh, and there’s heating elements in the grips for those cold, Belarusan mornings. In typically Eastern-European form, Matiz isn’t one to rant or rave about the bike or wax lyrical about the work he’s performed. ‘We are satisfied with the result,’ he surmises. So I’ll blow his trumpet for him. Recast have created a fantastic little Kawasaki scrambler around a solid platform that’ll be just as fun to ride as it is to look at. It’s great to see a custom bike that sacrifices nothing in the way of rideability.