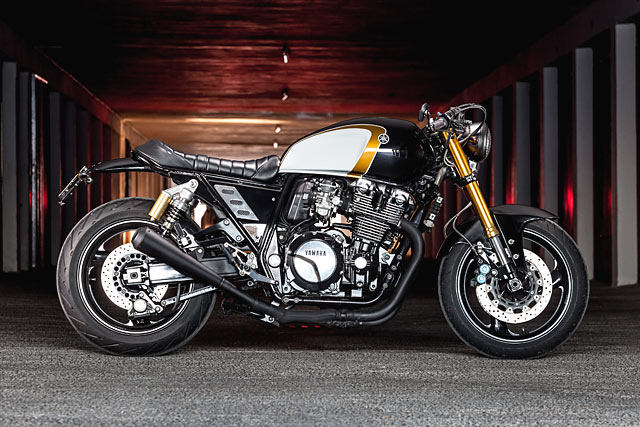 If you’ve ever ridden any of the larger capacity UJMs, you’ll know that a lack of caution when applying the throttle can be a biblical experience, metaphorically or otherwise. With sub three second 0-60 times for most of these colossally-motored motos, they can outrun a Porsche Turbo and let you feel like a vengeful god, to boot. So when Spain’s Macco Motors had a client request to make the follow-up to a previous Yamaha custom named ‘The Sinner’, they’ve managed a minor miracle in the form of this all-new black and white ’00 XJR 1300 they call the ‘Dark Angel’. Macco’s Jose starts proceedings with a brief shop update. “It seems we’ve only been working on two motorcycle brands in the last 6 months: Triumph and Yamaha. The Yamahas included two XSR700s, an XSR900 in collaboration with TW Steel & Yamaha Europe and a restomod Yamaha XJR1300. Then, as an encore of sorts, we built this Yamaha XJR1300”. While searching for possible donors, Jose and Tito found a bike in Madrid in a second-hand moto market; it was in great condition and the team agreed they should snap it up and get things started. Raul, Macco’s customer, is a Spanish guy who currently lives in London. When he first contacted the shop, his preferred brand was Triumph. But it soon became clear that the bike he really wanted was something similar to their No. 23 XJR1300 brat cafe, ‘The Sinner’. Finally Raul saw the light, but it was mutually agreed that the bike should have its own personality rather than it being a simple copy. After all, there’s no fun in just going through the motions. “After tuning up the engine and having a little too much fun with the stock bike, we started the hard work with a front fork conversion. For this we got the forks from a Yamaha R1, disassembled them and then anodised the tubes in the same gold colour Raul had chosen for the rest of the bike. Here we also worked on the original top yoke to adapt the new shocks and removed the factory ignition set-up”.

Opting for a 6″ grilled headlight, they built a custom bracket to get it sitting in just the right place. An MMB mini speedo was perfect for the prerequisite clean, minimal cockpit look. It was reinforced with LSL clip-ons and bar-end mirrors alongside black Avon grips.

“Next, we chopped some metal and built a new subframe and two-up seat base, along with some new steel side panels to add a touch of the unique to the build”. “We liked how the original Yamaha R1 front guard looked on the build, so we kept it and made a new fibreglass one for the rear. Next came new turn signals and rear lights, all of which were integrated into the subframe. And to get a better riding position, we mounted some LSL rear footpegs”. While the original pipes were kept as is, the lads adapted a set of classic-looking Spark mufflers to the noisy bits. Then some new Metzeler Sportec M5 shoes were fitted and some fresh white, black and gold paint was immaculately applied. [superquote]“As a final touch, they threw budgetary constraints to the wind and summoned Öhlins, the Swedish god of safe journeys, to add his blessings to the bike’s already very capably abilities”.[/superquote] “Adapting parts is always the most difficult work for a build,” says Jose. “Like modding the mufflers, front forks or building the side panels from zero. But to be honest it was much more fun than problems on this latest Yamaha project”. Fun? The lucky devils.