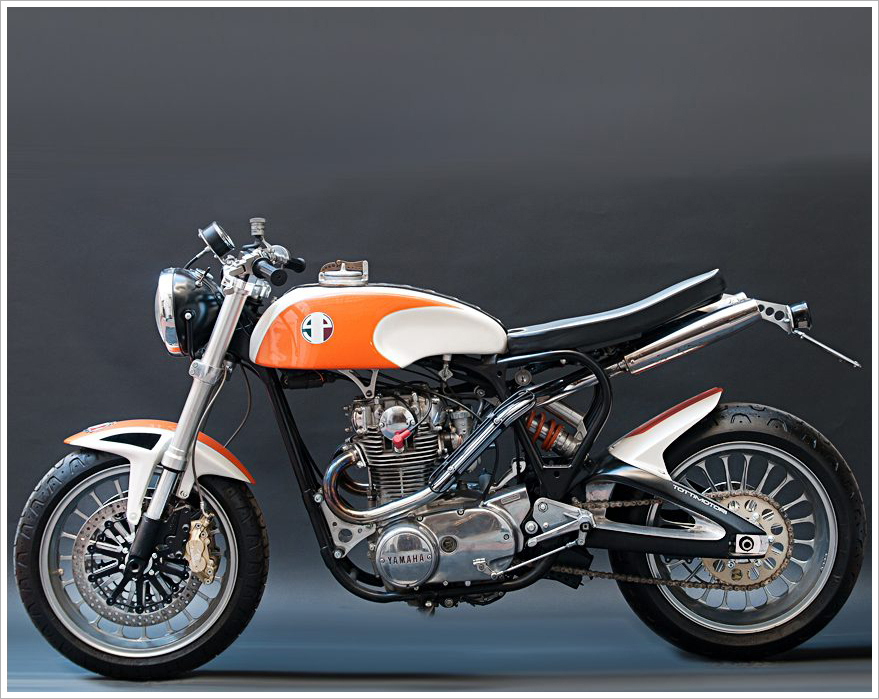 Some bike builders are like magicians. They take particular props, put them together and ‘hey presto’, produce something you didn’t think was possible. A mixture of new and old componentry on a bike build is an example of this. If you lean too far one way, or the other, you can ruin the concept of a build. Or at the very least, while trying to put a new image on an bygone concept, you have the motorcycle equivalent of David Hasselhoff. Roberto Totti and the team at Hook Motors have what it takes to mix new with old, and with over thirty years of experience in Robert alone, you can see the professionalism put into their builds. The Yabsa is one such bike, with a few different motorcycles, from a few different eras donating componentry, and the end result is magic. Labeled as a ‘retro-futuristic café racer’, the Yabsa is definitely the sum of all it’s assorted componentry, and the workshop at Hook Motors isn’t afraid to mix brands. A BSA front frame has been mated with a custom rear frame, a Yamaha R1 rear swingarm rounding out the frame components. On the frame sits a carbon fibre & leather trimmed seat, bearing the name of the bike, confusing anyone trying to ascertain it’s make and model. To give the bike a sporting chance, the front end is a Showa setup, ISR clip ons sit atop the forks. A set of custom PVM aluminium rims add lightness to the build, the braking system is fully Brembo front & rear. To have engine power to match the look, the Yamaha XS650 engine has been taken out to 750cc, from the headers back the piping is an MV Augusta custom job. There is a lot of custom work put into this build, with Roberto Totti’s wealth of experience being put to use.  The fuel tank is custom built for the bike, the fliptop hold down for the fuel cap a nice touch. The front fender is an inhouse job as well, it is modern looking but doesn’t clash with the rest of the bike. The entire bike’s electrical system has been stripped and a custom harness built from scratch, not surprisingly, given the multitude of different major components going into the build. From the large modern-style wheels for the speed, to the big bore twin for the power, the whole unit comes together beautifully. Although this bike was built a while back, if you can wait 6 months Hook Motors can build one for you, or you could come up with ideas of your own. Either way, Roberto Totti the magician bike builder will surely have more tricks up his sleeve.