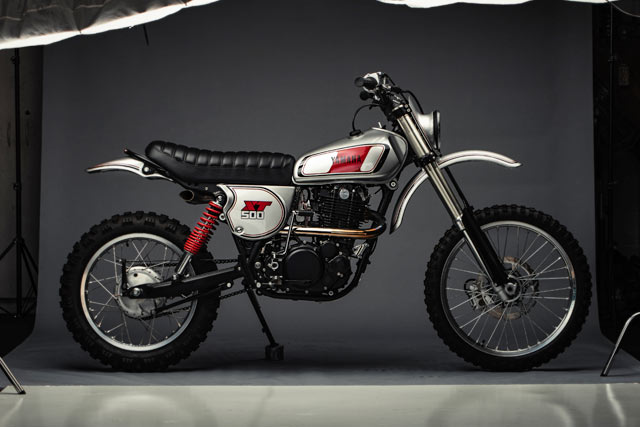 Forget about textbooks and teachers because the two things that will always capture a teenage boys attention are speed machines and wild women. Combine the two and you have a potent mix that will forever be burned into an impressionable young mind! Many moons ago one such youngster witnessed such a sight and it was a Yamaha XT500 that had taken centre stage. Now ready to occupy the lead role in his youthful fantasy, he called Sean Skinner of Hamilton, Virginia’s MotoRelic to build him an XT to rip the roads and woo the women. 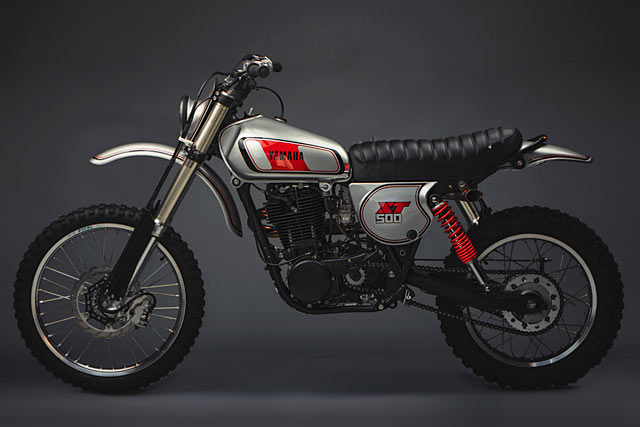 “My good customer found the ’70s big CC thumper and brought it to me because there was a moment in his adolescence that he remembers very well. A guy he knew rode up on one with his hot girlfriend on the back. He remembered thinking, “man, that dude has it all. The bike! The girl!” As they rode away, he knew one day he would have to have that! He wanted the bike to resemble its stock form but for me to give it a sexy makeover. Just a little nip n tuck… or so I thought,” laughs Sean. 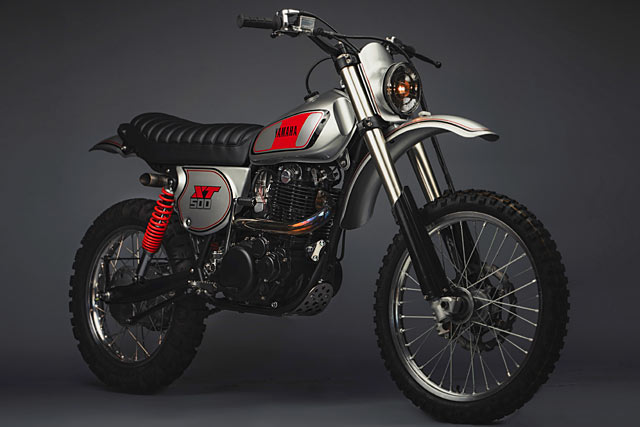 Time for surgery and one of the customer’s requests was for a wider rear tyre and to do it properly meant finding a new swingarm to suit. An item from an early model Suzuki PE250 was found to be perfect, but it’s no bolt on fit with Sean having to modify the XT frame and machine up new spacers. Needing just the right shocks to control it all, a call was made to Ikon Suspension who had the perfect set, 15 inch units that even came with the red springs, score! A new rim has been laced up with stainless spokes and its all wrapped up with a fat 130/80-18 Mitas Enduro tyre.

Up front however things get an upgrade and brought into the 21st century with the old forks out and a new set of Yamaha YZ250 USD units selected for the job. Once again it’s no bolt on conversion and required a set of custom bearings and steering stem to go together. All mounted up Sean then reduced the massive 12in of travel by 20%, which greatly improved the steering and got the geometry spot on. A 21 inch Excel rim with stainless spokes and rubbered up with a Mitas tyre is a big improvement over stock; so too the Yamaha front disc with Nissin caliper. 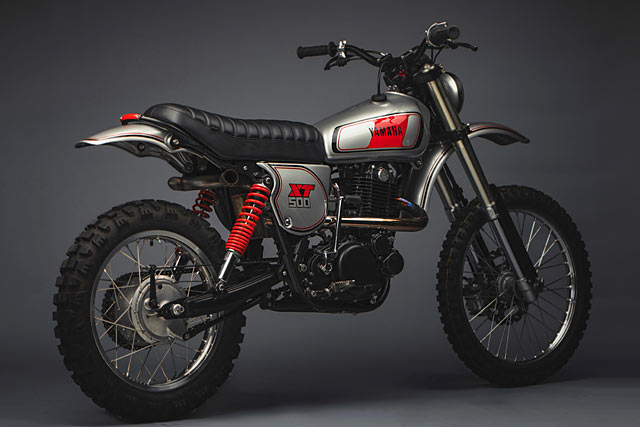 [superquote]“The tank has been notched by hand to clear the new fork setup… this Virginia boy really can mould metal!”[/superquote]

“With the bike sitting correctly I moved onto the headlight bezel. It was shaped from aluminium and holds an offroad style Hella lamp. Since I’m seriously lacking any metal shaping tools (or skill), I had to get creative to produce the look my customer wanted,” explains Sean. Although we seriously beg to differ and the results speak for themselves! That bezel he crafted from the inner side of a 180° bend from a turbo pipe. While the tank has been notched by hand to clear the new fork setup and both show this Virginia boy really can mould metal! 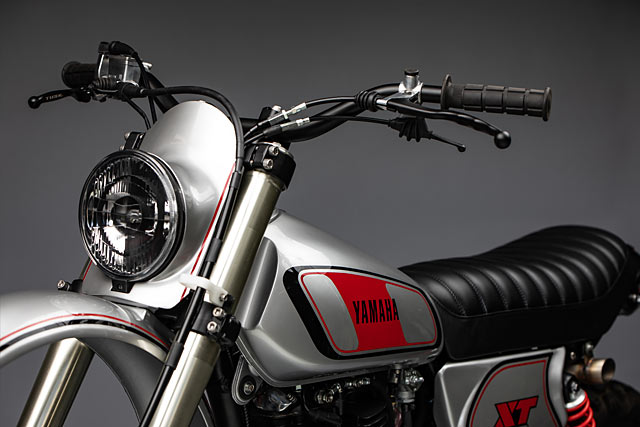 The side panels were sourced from Heiko Kuntze at Kuntzinger CNC in Germany who fabricates them out of aluminium with Sean making the mounts. Then he set about crafting the fenders with the rear the perfect balance of form and function and the front end bolted up under the yokes giving the perfect off-road look. He then moved onto re-shaping the factory seat, sculpting the padding from foam and Yoga matt before having Counter Balance Cycles upholster it in style. Then the whole thing was pulled down so Knights Customs could do the brilliant paint and NV Coatings the powder.

With everything else out of the shop the engine was torn down and there was no shortage of work to do. First on the agenda was replacing the broken timing chain guide and the cylinder head was swapped over for an SR500 item. With everything inspected and cleaned the engine was rebuilt with all new gaskets and seals, then given a lick of paint to have it looking better than new. The final piece of the puzzle is a Mikuni flat slide carb that brings the engine to life at first crack of the throttle. 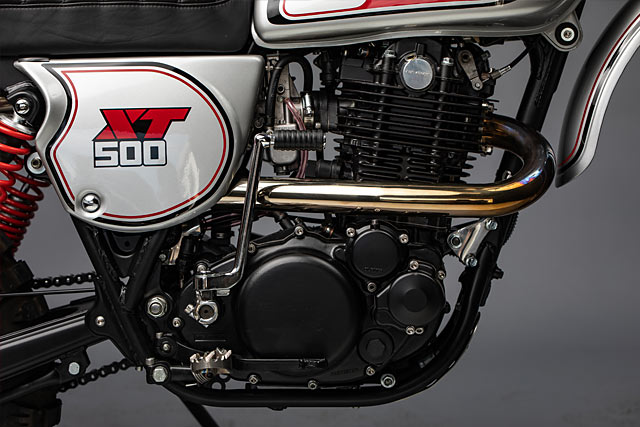 “Now lets talk about my crazy muffler. My customer wanted a hidden muffler, he really didn’t want the usual looking muffler that hung out the back,” explains Sean. So remembering an Aprilia that utilised the muffler as the inner rear guard the idea was to come up with a similar design for the Yamaha. Starting with a sheet of stainless Sean cut out all the pieces he thought he’d require and began fab’ing it all together. The muffler itself is baffled much like you’d find inside a performance car item with each side facing tip getting its own baffle too. 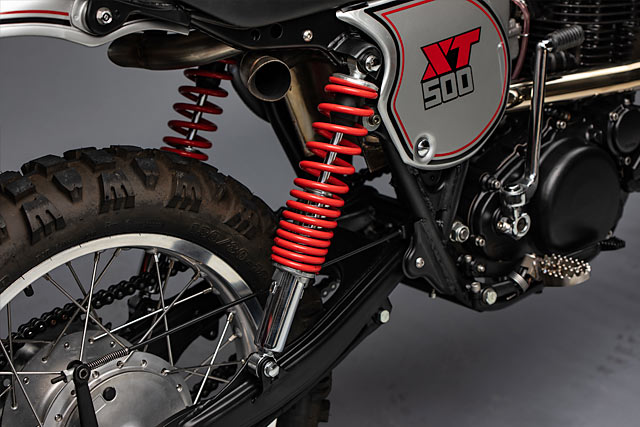 “I was pleased that it sounded great and there were no tuning issues to deal with,” smiles Sean. But not only does it sing a merry tune, the design means there is no visual interruption to the beautiful body work nor any glowing pipe to burn the rider’s leg. A tiny anti-gravity battery keeps the power on and new bars and controls add modern ergonomics to the ’70s machine. The finished result is simply stunning, nothing is over the top and yet everything is drastically improved. Now all that’s left is for Sean’s happy customer to kick the XT to life and ride off on an adventure to find that beautiful girl! 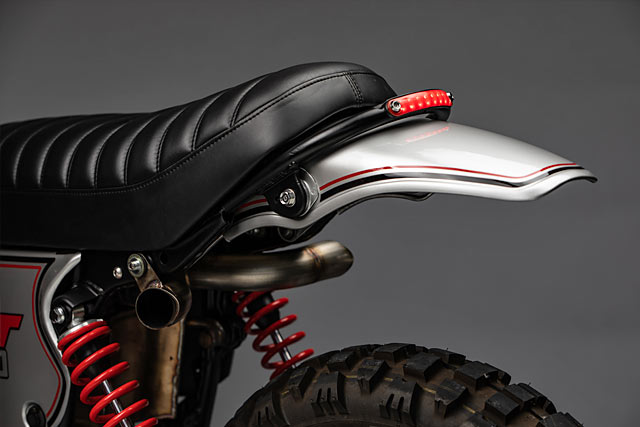