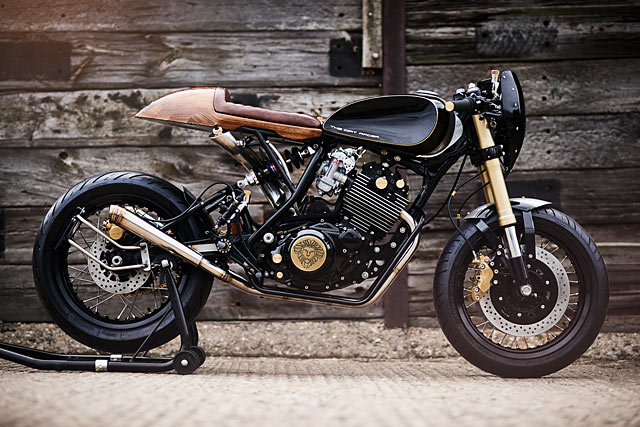 The discovery of new shops and custom bikes is by far the best part of our jobs. Waking up each morning to emails containing virtual goldmines of moto coolness is a privilege, and one that we’ll just never tire of. And this is the latest one to bless our inbox with its coolness. From the picturesque English countryside north of London, here’s Lion’s Den Motorcycles with their beautiful Yamaha XT600 they call the ‘Dirty Racer’. “Lion’s Den Motorcycles is still a very young company,” says the also very young Daniel Thomas. “And it’s been a crazy journey so far. 2017 has been a year of really honing the designs of my builds; finding the style that you wish to convey to the world can be tricky but I feel like I am now reaching that point”.

“The Dirt Racer is in essence a cafe racer, but with many twists and turns. It started
life as an ‘88 Yamaha XT600 dirt bike and so the name Dirt Racer then appeared. To those of you who say, “you can’t race that in the dirt”, I hope it is now a little clearer for you!” The bike was found in what Dan calls ‘a rather sorry state’. And while that could mean many things to many people, Dan’s polite Englishness soon gives way to a more detailed description. ‘To be honest, it was downright bloody dangerous”. Got it. “I wanted to build a bike that showed off some of the more crazy ideas that float around my head,” Dan continues. “Luckily, this was not built for anyone specific and so I had a free reign to let the madness out”. Some builders will wait a lifetime for a brief like this, but it seems Dan has managed to pull one out of the hat on almost his first outing. “My build process in general is quite impulsive. I don’t start with beautiful renders, as for me part of the excitement in building bespoke machines is changing your ideas as you go along so that there are no restrictions. If something appears in front of your eyes that you think will be amazing, then you can really go for it”.

“In my opinion, this means that I can truly explore the boundaries of moto design. The Dirt Racer has been my first opportunity to walk that path; I intend on doing it many more times”. “The hardest part of this build was the fact that I was working on it in my free time. Because it was such a drawn out process, staying in the right creative state of mind can be testing. I do however love a challenge”. “I think the solid Zebrano wood seat is still my favourite part of the build. There truly is blood, sweat and tears in that seat and for it to have turned out like it did is a real achievement for me”.