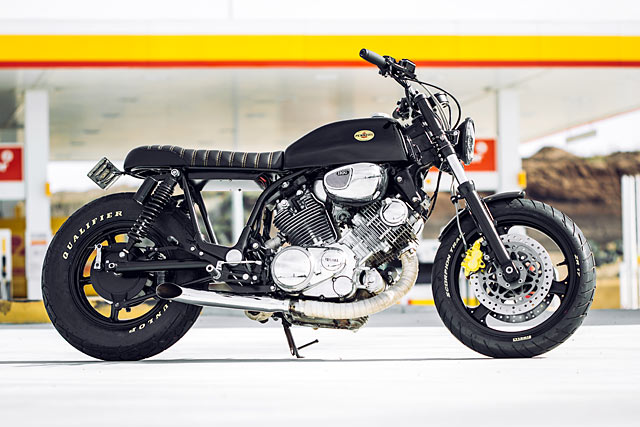 When a loyal customer rolled up to Billy Kuyken’s workshop with a 1990s Yamaha XV1100 and a simple design brief, his imagination went into overdrive of how he could turn this once cruiser into a formidable street tracker. Billy and his Rogue Motorcycles workshop have become widely known in the Western Australian custom motorcycle scene for their unique street trackers, which explains his excitement and eagerness in essentially having free reign on the project. “We did some work for the customer previously, and then one day he turned up and said he sold the old bike and bought this – the XV1100,” Billy explained. “It was in pretty good nick with around 32,000 kilometres on the clock. He showed me some pictures of trackers that he liked, but he wasn’t very specific – I basically had control of the direction of the build and just showed him stuff that I thought would look good along the way.”

To get an initial idea on the build’s aesthetics, Billy played around with a number of tank and seat designs, retro-fitting a selection that he had sitting around in the workshop. Ultimately, it was decided a Honda CB200 would be the perfect donor, along with an off the shelf seat pan that was later beautifully upholstered by Poli Motor Trimming.

It was at this point where a NASCAR-inspired scheme struck Billy’s heartstrings, largely due to the square-shaped tank and seat, which very much resembles that of an American stock car model. It influenced a host of the design modifications and final colour choices, where he elected for a predominant black base complimented with hints of yellow – a colour synonymous with racing liveries.

“We mucked around with a few tanks, and the CB200 tank just seemed to work so well,” he continued. “I’ve used three of them on builds over the last 12 months. I had to cut the brackets on the inside and widen the tunnel. “The NASCAR idea grew with the shape of the tank and the seat because they are quite square and similar to the shape of a NASCAR. We ran with that inspiration after the idea came to mind and added some neat features to reflect it.”

To rid the Yamaha XV1100 of its cruiser moniker, it meant a significant amount of fabrication was needed from Billy to enhance the bike’s lines and provide it with a true tracker visual. The low-slung subframe was cut out and later extended, raising the suspension lugs by 90mm, while a fresh set of JBS shocks were fitted to accommodate the change. In fact, the whole subframe has been redesigned with the seat pan in mind in order to maintain a sleek look. “Looking at some other trackers that have been built with the XV1100, you can see how the frame interferes with the lines, so I cut out half of the rear subframe and extended it. The mounts for the shocks have been raised around 90mm and I made the subframe and loop to fit into the seat.”

With the rear-end being lifted, the front needed to come down. The stock forks were traded in favour of a set from a Kawasaki ZR-7, while Billy laser-cut a pair of brackets that would allow a set of Tarozzi rearsets to be installed, ditching the standard forward-mounted controls all while complimenting the new riding position. “The Yamaha obviously needed to come down up at the front, so we swapped the forks for a set from a Kawasaki ZR-7. The lower legs of the forks were painted to crisp them up and match the fresh paint on the wheels and tank. I made up the brackets to fit the rearsets, and they fit really well considering the bike’s designed with forward controls in mind.”

[superquote]“To keep the NASCAR vibe flowing throughout the bike, Billy kept the pipe slung low and under the bike.”[/superquote]

The headers were fabricated in the Rogue workshop and finished off with an aftermarket pipe. To keep the NASCAR vibe flowing throughout the bike, Billy had to do some handy-work to keep the pipe slung low and under the bike: “The exhaust was a little tricky – I wanted a two-into-one system because the single muffler down low looks really cool and adds to that NASCAR vibe. The rear header basically blends straight into the muffler as there’s limited room, rather than blending in with the front header first.”

The bikes electronics, controls and instruments have also been boosted with a selection of modern components. A seven-inch multi projector LED headlight has been installed up front and pushed back as much as possible, while the minimalist Daytona Velona speedo is a neat touch along with the CNC machine levers. The front CREM mini LED indicators are fitted to tiny brackets that Billy has welded to a pair of fork sleeves, while the rear consists of a set of CREED ultra low profile units amongst the taillight that’s built into the seat. The Yamaha build has brought great satisfaction to Billy, and in all honesty, he’s sad to see it leave the workshop: “I was really excited building this bike, it just always looked good every time I went into the workshop. It attracted a little bit of attention from people coming and going, and I think it’s because it really radiates a muscle vibe and just works really well with its big engine.”