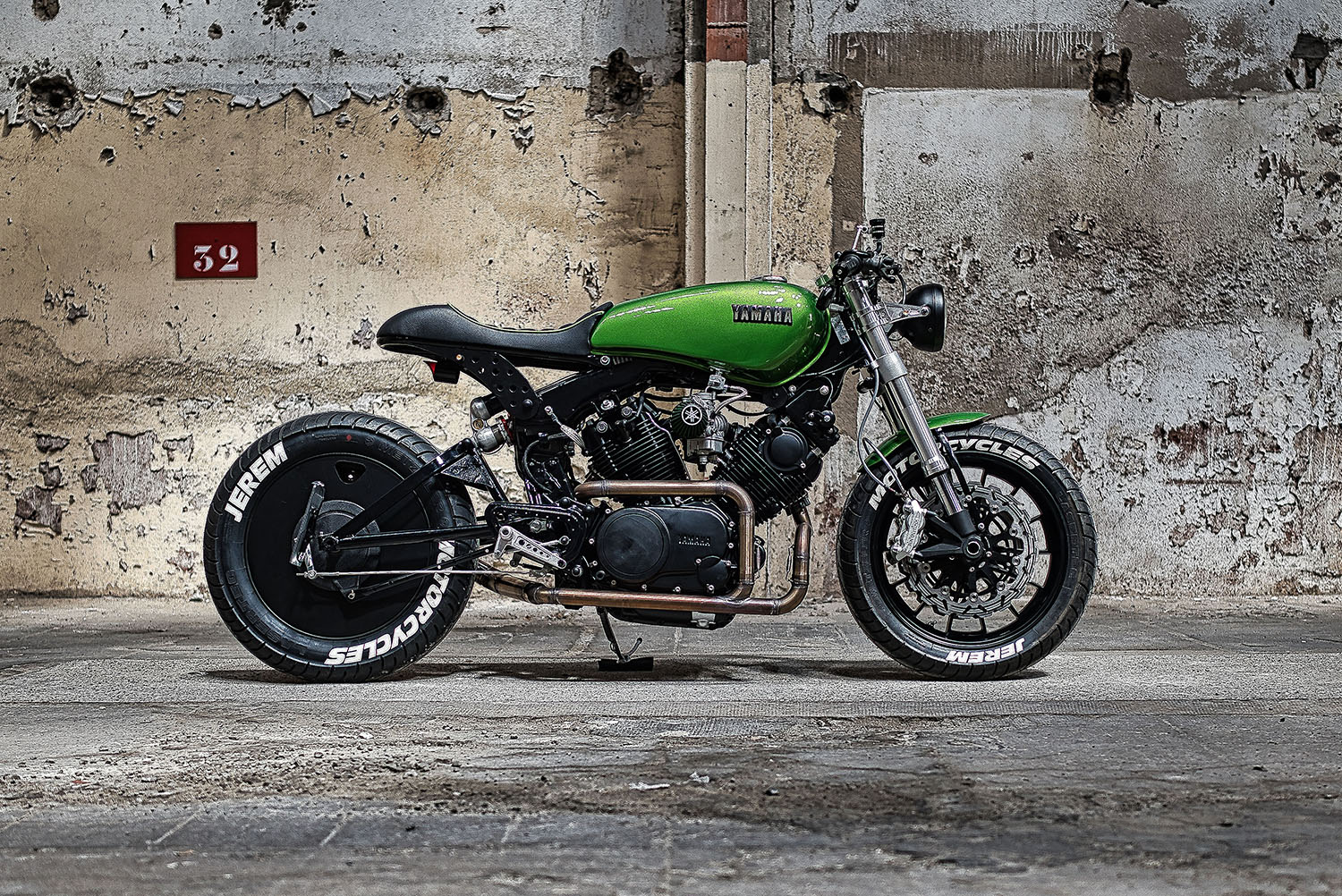 The end game came fast for the Chopper scene, with many of the builders who’d become household names going broke overnight. Suddenly those six-figure builds were practically being given away on sites like eBay and Auto Trader. But in the background had emerged an ever-growing presence of the more discerning custom creator and their impact on the zeitgeist has been simply overwhelming. One of the early bikes they adopted was the v-twin Yamaha XVs; was it because they made a great donor or because one builder had set the stage? That we may never know, but after a small absence of the Japanese cruiser, French builder Jerem Motorcycles comes storming back with an ’83 XV750 to make you green with envy.

My suspicion as to why the XV, or Virago, range became so popular is that it was largely a mix of availability, cheap purchasing price, and the immediate influence of builders like Greg Hageman. In many countries, they were considered a poor man’s Harley, and what custom parts were available were to turn them into a more muscle-based cruiser. But this meant that their earliest evolutions into cafe racers made many sit up and take notice, they could be cool after all. One builder to see the light was Jérémie Duchamp, who under his Jerem Motorcycles banner made an XV1000 one of his first builds.

With a background in racing his bikes always have a stripped-down look with drastically improved handling and after a string of incredible Ducatis, he was on the hunt for another XV. He found this 1983 750 about a year ago and it was in a hell of a sorry state. Back at his shop and the bike was stripped down to every last nut and bolt, with all of the major components given a good once over. Early on he knew that the forks were shot, the loom a total mess and the engine was suspect too. This would have to be a ground-up rebuild and he quickly had the frame and swingarm in for sandblasting.

More grot and rust were revealed, but thankfully this was only in the rear subframe that was not going to be used anyway. In a departure from his usual full tube subframes, this rear piece instead uses a hooped upper than is tied to the rest of the bike by a pair of drilled metal plates. It provides for a sturdy setup in both form and function, and it along with the frame and swingarm were then powder coated in a glossy black. The rear shaft drive was rebuilt for years of smooth and reliable operation, and the chassis was pieced back together.

To bring the handling up to his standards, Jérémie knocked in a new set of bearings to the neck and had the guys at USV Racing machine up a quality set of triple clamps. Through these are dropped a set of USD forks from a modern Ducati, with an m.lock also finding its way into the top tree for easy access. At the bottom of the new legs are a full set of Brembo radial calipers and wave pattern discs and with the right axle in place, a Diavel front wheel gets the call-up. To improve the rear end, the tape measure and calculator were out and this helped to select a Sachs rear shock.

But there was still a niggling feeling at the back of Jérémie’s mind that he better take a good look at that engine. Apparently, it had been rebuilt before, but with the heads and barrels pulled, all that was visible was not good. So the wise decision was taken to swap in a low-mile alternative that was in good running condition and had just 9,800km on the clock. To breathe new life into the twin, “Dellorto PHF32’s were added to make more power, and the settings entrusted to the “Les Belles d’Oc” in Béziers.”

On the hot side of the engine, the job was never going to be done by anyone but Jérémie, who loves to make unique full systems. Having previously done an under seat shotgun exhaust for an XV, he went a more conventional route on this bike, with the stainless pipes merging under the centre post and spitting out the other side through a polished muffler. A complete new loom has been built with an m.unit at the heart and a small lithium battery to provide the cranking power. With a custom set of rearsets built in-house that bolt to the stock supports.

In addition to the ultra-clean mechanicals, the looks all come from that big hit of green, with the stock tank panel beaten and then sprayed in a hot hue from the Audi catalogue by A2F. The guys at Point Sellier 34 took care of the upholstery on the seat, with colour matching pipework and even green air filters were located. The lighting is all beautifully done with a mix of traditional items, billet brackets and tiny LED additions taking care of things. Brembo levers and a radial master cylinder have been added and a custom rear wheel cover completes the build.

The finished French product really does make it easy to see why the XV is a popular donor, and the poor man’s HD is now one kick-ass cafe racer.