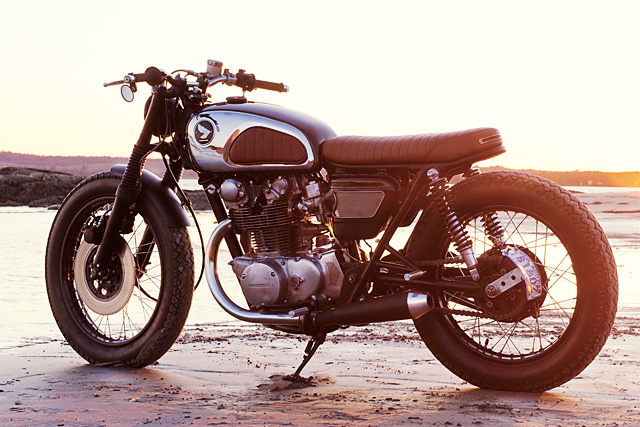 When it comes time to give credit to which Japanese bikes began the rise and reign of the machines from the Land of the Rising Sun the countries first superbikes, the Honda CB750 and the Kawasaki Z1, often receive the praise. But before they arrived on the scene the first strike in the four-stroke wars was delivered by a motorcycle known simply as the Black Bomber. Released in 1965 the Honda CB450 came packed with technology that defied its very classic chrome and black aesthetic. The first full production bike to feature dual overhead cams, it produced more than 100hp/litre, enjoyed reliable electrics and was described at the time as “engineered with passion and styled with restraint, an embodiment of all the qualities a motorcycle should posses”. It’s with exactly that in mind that KickMoto pay homage to the original with their own take on a classic icon, a 1972 CB450 done just right. From Halifax, Nova Scotia, KickMoto have fast become one of the best builders of clean customs in Canada making them the perfect team to tackle a customers request to take their CB450 and “Make it look new but retain the vintage look”. When build 004 arrived at the KickMoto workshop it had already received an engine overhaul “so we were just in charge of the cosmetics really” explains Jeff Shaw, but they’ve also re-energised the old Honda’s soul and it started with some clever delving into the parts bin. The standard stubby swingarm was taken out and replaced with a CB360 item that is 1½ inches longer. The change pulls the rear tyre out from under the cloak of the frame and gives the machine a longer, sleeker look. To lower the bike closer to the ground the bike gets a corresponding fork drop of 1½ inches which retains the classic appearance of the Black Bomber while adding a more sinister touch. By the time 1972 had rolled around Honda’s designers had made a number of changes to the fuel tank to bring it more inline with the rest of the CB family, but KickMoto have given their build a nod to the original with a little something extra. The classic black and chrome design shows no mercy in highlighting any imperfections and the Canadians have made sure their metal work is arrow straight including the gorgeous factory badges. The tank is sprayed black with a metallic flake base coat that picks up the light of the sun to truly show off the quality of the chrome. The same treatment is given to the side covers with the metallic flake shining a light on the hand-made mesh inserts with a single KickMoto 004 badge on the right hand side. To make the most of the fancy flake it is limited to these two items only, just the right amount, with the rest of the black work including the now bobbed fender finished in a satin black powder coat. But that doesn’t mean the build has no colour to accentuate its curves, it’s just been done in an unconventional way with a very traditional material. Tan leather has been used to cover the custom-made KickMoto knee pads that gives the tank the kind of detail you’d expect had Honda released a prestige range of the original CB450. The same leather hide is used on the seat for uniformity, but it is here that some very modern machines and materials were utilised to keep things clean. To create the foundation the rear was lopped off with a new shortened hoop welded in its place. From here the design of the seat with a fully integrated light system could take place and a base and seat foam was shaped. Then with the 3D printer fired up a holster was moulded and printed that is inserted inside the seat where a section of foam has been removed. With the light in the holster and the wiring in place the entire seat was covered in leather and stitched shut, then a scalpel taken and a cut made where the light should come through. Success, the hole in the leather hit dead on and the small light assembly was exposed, with the right cuts made the leather was then hand sewn closed to stop any further stretching. To cover the light a trim piece was again produced on the 3D printer, filled with ultra fine mesh and then attach to the light via prefabricated mounting points, it’s genius, a lot of work for a simple part, but more than worth the effort. With such high skill and detailed work going into the rear end the front is kept just as clean and simple to maintain the balance and a set of low-rise bars sets the scene. Drilled levers and classic grips give all the functionality you need, while a single instrument keeps the boys in blue happy and a small diameter headlight shines the way. Further restraint in the design process is evident in the footpegs and controls, no rearsets here, just beautifully knurled round bar for function and style that’s custom while still period correct. The original wheels have stayed too, with the rims and hubs refreshed and finished in black powder coat before being re-laced with new chrome spokes. A little touch of brat attitude is added with the fitment of Avon SM MKII rubber, another display of doing just enough without ever going too far. Of course you can’t talk about any Black Bomber and ignore the brilliant engine that the Brits refused to let race due to its DOHC setup. But it wasn’t just the twin cams, the 180° 444cc engine would rev hard to 9000rpm with barely a vibration along the way, it’d do the ton and never leak a drop of oil. With the engine having already been rebuilt KickMoto simply cleaned it up and added a custom touch by shortening the entire exhaust system as much as was physically possible and topping the mufflers off with a set of machined aluminium tips. KickMoto’s 004 “Black Bomber” could have been built entirely with parts available in the ’60s with the only exception the LED tail light and yet it draws on both a wealth of knowledge and influence of decades of custom builds to create a neo-classic that will truly stand the test of time. It’s simple and understated in a world where far too many can be tempted by the machines, parts and crazy colours that are at their instant disposal. In maintaining their commitment to the classic the team has built a bike that stands out from the crowd for all the same reasons as the original, it possess all the qualities a motorcycle should embody, engineered with passion, styled with restraint.