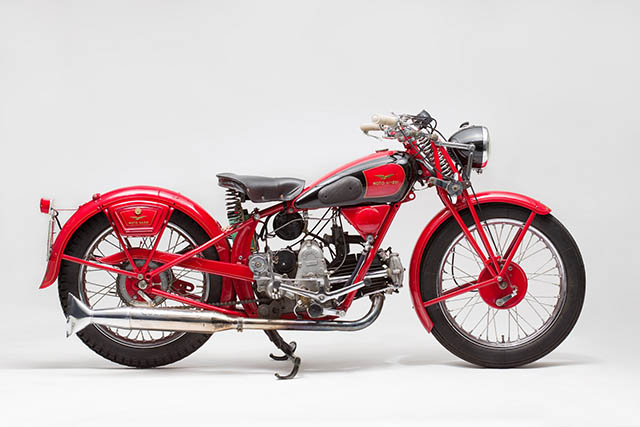 It must be said that today we take a lot for granted. Go back 80 years and things would be very different. No mobile phones, no internet, and riding a motorcycle was an adventure in itself. This was the era that Triumph deemed automatic engine lubrication to be superfluous, that the riders of their machines could be trusted to manually work the oil pump as the bike needed it. Could you imagine doing that today on your UJM or custom? This was also the era that a small motorcycle firm named Moto Guzzi came to prominence. From their initial launch in 1921 of the ‘Normale’ model, the Guzzi brand thrived and made a name for itself by showing the passion Italians are so well known for. Today’s feature bike comes from the fledgling days of Moto Guzzi, just over a decade after the initial model launch, this V model bike was born. And 80 years on it looks just as good as ever. Pumping out 18hp at 4300rpm, the horizontal single cylinder OHC motor can push the bike to a dizzying (for it’s day) 120kmh. Although the model V bike was produced from 1934-40, the engine evolved over the years, culminating in the racing engine found in the ‘Dondolino’ sports model of the 1950s. The engine technology is definitely agricultural, but aesthetically pleasing. External valve springs, a decompression lever and open face ‘bacon slicer’ flywheel make up componentry that in it’s day was the norm, but have all been relegated to motorcycle Valhalla. Today’s bike is in the ownership of photographer Marc Schneider, a motorcycle fan who inherited the V after his father passed on. Marc’s father picked up the big red bike along with a Super Alsace as part of a package deal in 1981, and with little history known about this V model. The Moto Guzzi V was parked in a garage for over three decades and on inheriting it Marc adjusted the timing, fiddled with the carbs and the bike started with no issues. By Marc’s own admittance, the bike is far from perfect, but he wouldn’t change it. As such, a breakdown on the way to the studio for the photoshoot, left the Moto Guzzi not running and a kilometre away from the studio. Such is the fun of owning a vintage motorcycle. It’s not all doom and gloom though. According to Marc: “Fiddling with the friction dampers and the ignition timing is fun. And the sound the old thumper makes a joy. That’s why I’m happy to ride a bike that has lived for 80 years – and I’m looking forward to the next 80 years.”