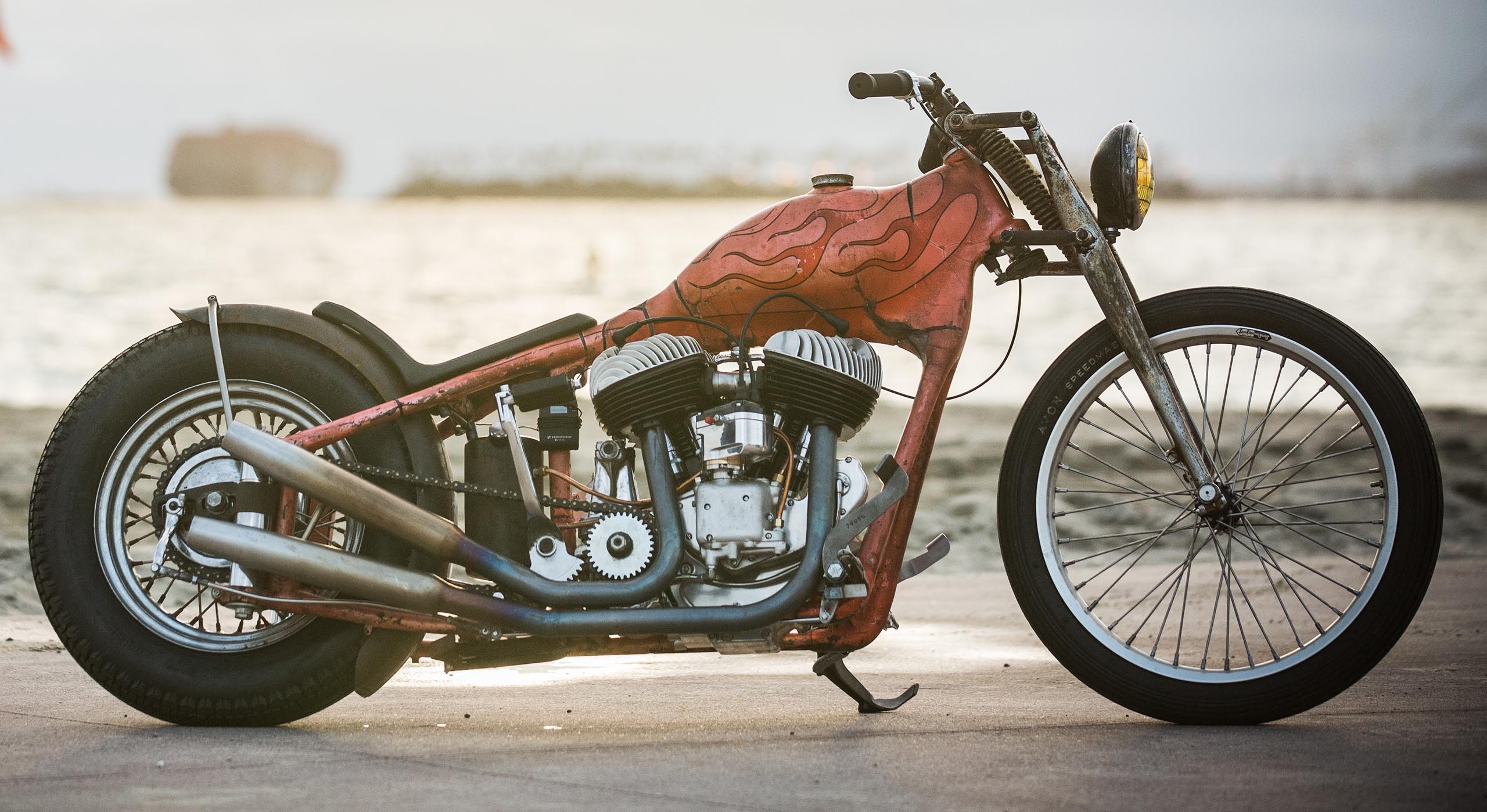 Perry Sands’ obsession with motorcycles began at the age of nine, getting a ride aboard his dad’s friend’s Triumph in 1957 and kicking off a series of events that’s resulted in a multi-generational moto-dynasty. Perry’s parents embraced their sons’ fascination with bikes, eventually gifting Perry and his little brother, Ted a quarter-liter dirt bike to tinker with after the two had cut their teeth playing around with lawnmower engines shoehorned into mini-bike frames. By the time he was in his teens, a now mechanically-adept Perry found himself working in a machine shop and spending nights and weekends wrenching on his own bikes.

In the middle of the 1960s, Perry was bit by the chopper bug, and set out about piecing together his own raked and big-wheeled build, eventually sourcing a bone stock 1946 Indian Chief for $215. Thoroughly taken with the trick front-ends in the pages of the AEE Choppers parts catalogue but unable to afford the exorbitant fork, Perry opted for a stock Indian girder unit. Dubbed the “Peyote Puffer,” the ’46 Chief also featured a plunger-style rear-end, a bobbed rear fender, a peanut tank that was welded, glassed, and molded to the frame, a red on pink flame paint job, and a heavy dose of chromed bits.

Upon its completion in the late ‘60s, Perry started exhibiting the Puffer at local bike shows in and around Southern California, catching the attention of other riders and ultimately leading to requests for Sands to build other bikers a Springer fork. Unfortunately, not too much later, some ambitious tuning combined with faulty wheel bearings would lead to the Puffer going down on the Pacific Coast Highway at 80mph, and while Perry was able to “surf” atop the skidding bike and avoid any significant damage, the same couldn’t be said for the now thoroughly thrashed Indian.

At this point, Perry had met and married his wife, Nancy, and was in need of work, so in 1970 he sold his pickup truck, purchased a lathe and welder, and began operating under the banner of Chopper Spring Glide Machine (named after Sands’ inaugural product) before later taking the advice of a friend and changing the name to “Performance Machine.” Working out of a small shop in Paramount, California, Perry and Nancy wouldn’t experience success overnight, though over the next five years, PM released a slew of performance-bolstering products such as upgraded braking systems and custom wheels for Harley-Davidson bikes, demonstrating PM’s top-notch craftsmanship and engineering and design abilities.

Late in the summer of ’74, the Sands clan would grow with the addition of Roland, and just like his father before him, the newest member of the Sands family would share his people’s passion for motorcycles. Perry’s proclivity for wrenching and tinkering wasn’t lost on Roland either, designing his first set of wheels at age 14 before building his first one-off bike — a Sportster 883-turned retro-style flat tracker — six-years-later in 1995.

The year prior at the age of 19, Roland Sands also commenced his road-racing career that would culminate in him winning the 1998 AMA 250cc GP Championship, and would come to play a pivotal role in shaping the lens in which he now views and approaches motorcycle building. After hanging up his race leathers for good at the end of the 2002 season, Roland would spend the next few years working full time at PM while simultaneously focusing much of his effort and energy on honing his bike-building skills and eye for design.

In 2004 one of Roland’s projects received “The Award of Design Excellence” from vehicular design legend, Chip Foose before being crowned “Rookie of the Year” on the Discovery Channel’s Biker Build-Off award show the following year. With Roland having now demonstrated an undeniable knack for customizing bikes and PM still going as strong as ever — having relocated to a larger facility in La Palma only a few years prior — the company decided to launch the Roland Sands Design brand in 2005 (the same year Perry and Nancy sold Performance Machine to MAG).

Over the next decade-and-a-half, Roland would quickly build a moto empire on par with that of his parent’s, becoming a powerhouse of a brand trading in riding gear, accessories and apparel, aftermarket parts, and world-class custom motorcycles — not to mention noteworthy collabs with watch companies, heritage footwear brands, and several major motorcycle manufacturers, just to name a few. And while Roland Sands now boasts an expansive portfolio comprised of a diverse variety of one-off two-wheelers, the style and taste of the RSD frontman remains rooted in his upbringing and experience around motorcycles, both at PM and out on the race track.

Starting on paper before being painstakingly translated into metal, every build that leaves RSD’s Los Alamitos HQ is objectively special, though last year Roland set out to create — or rather recreate — the most sentimental and important Roland Sands Design build off all time, partnering with his father, Perry to bring the fabled Peyote Puffer back to life for the first time in more than half-a-century.

“The story of this bike is its own little legend in our family because it was the first bike that my dad built. This bike has inspired me since the day I first saw that he built it just through old pictures, magazine articles, and things like that. It was always this badass low-drag bike out of an Indian Chief,” relays Roland.

After the Puffer met its demise on the PCH in ’69, Perry quickly turned his attention to other, less-damaged donor options, and lost track of his wrecked Chief. In 2016, a random series of events would lead to Perry unexpectedly being reunited with the long-lost Puffer — a machine Perry hadn’t laid eyes on since he was 20.

“I was doing some business with a fella’ named Tim Graever and he one day says ‘You know, I think I’ve got something that used to belong to you,’ and I said ‘what’s that?” He said ‘well, it’s an Indian frame.’ So Tim dug it out of his storage unit and sure as shit, it was my old Indian frame, resurfaced after 50-years,” explains the patriarch of the Sands clan. “I was blown away.”

When the father and son team decided to resurrect the Puffer, Roland was taken with the idea of building the thing around the chopper’s original chassis, and despite Perry initially having some reservations about utilizing a three-quarter-century-old crashed frame, after the duo got the framework up on the bench and checked it for straightness, it quickly became clear that using the Puffer’s frame would actually be a viable option.

“It’s just an incredibly unique thing when you get something like this back 50-years-later. We have such a cool opportunity here because that’s just a piece of family history and I think it’s really rare to run across something like this,” says Roland.

The project also called for sourcing an original motor from a 1946 Chief, though tracking down one of the 75-year-old 1,200cc V-twin’s would be much easier said than done. So Roland and Perry called on antique Indian expert, Mike Tomas of Kiwi Indian (better known simply as “Kiwi Mike”) to find an engine for the puffer. Kiwi Mike decided to resurrect the first reproduction Indian Chief motor he had built over 15 years ago.

Once an appropriate lump had been located, the air-cooled 74ci 42-degree V-twin was brought back to RSD’s SoCal HQ and fitted with a myriad of period-correct parts including an original Linkert carb, Morris magneto, and kicker gear and hardware. The Puffer 2.0 was also bestowed with an old-school custom exhaust setup and a custom oil bag. Kiwi Mike even came through with period-correct fasteners and hardware for the build, furthering its sense of authenticity and period-correctness.

“We’re using all the original parts (we can). We’re building a little bit of stuff, building the exhaust, an oil tank, the rear fender, mounts, and things like that, but predominantly we’re using original Indian parts,” Roland explains.

Just like with Perry’s original build in the late ‘60s, the recreated version would be gifted the same style of tank, so the duo got their hands on a Mustang peanut cell and proceeded to graft it onto the chassis using the same welding, glassing, and molding process. Staying true to the original, the gen-2 Puffer also sports a Springer fork paired with a plunger-style rear-end. And while the majority of the build remains true to Perry’s original chopper, some creative liberties were taken by Roland and the gang, including tapping RSD’s lead fabricator, Aaron Boss to whip up a custom hand-shifter and all the necessary linkages.

With the heavy lifting now in the rearview, Perry and Roland began putting the finishing details on the Indian. This included a set of antique foot controls foot, a bicycle pedal kickstarter, a patinated recreation of the Puffer’s original flame livery, an off-the-shelf headlight, and a bespoke air-cleaner inscribed with “California Über Alles” (a nod to the Dead Kennedys’ track that roughly translates to “California About Everything” in German). Saddlemen was also tasked with crafting the new Puffer’s thin one-off saddle, ultimately delivering a modern take on an antique banana-style unit.

Once the build was finally complete, Perry — who is now in his 70s —fired up the V-twin, tossed a leg over the thing, and took off down California’s iconic Pacific Coast Highway, the same stretch of road where the original Puffer met its demise some 52-years-ago.

“I feel like I’m going back in time, like this is a time machine being able to work with my dad on this project. I mean, this is his bike and we’re getting to recreate it so it’s a pretty special project for us together, and it might be the last bike we build together. I don’t know,” exposits Roland.

It may not be the most technical or high-performance RSD build, but it’s hard to overstate the significance of this project, as it really is the one motorcycle that kicked off the Performance Machine and Roland Sands Design legacy that continues on to this very day. The sheer extent to which the stars had to perfectly align for this project to come to fruition is nothing short of astounding, either. And as it often does, it all started with a kid and his bike.