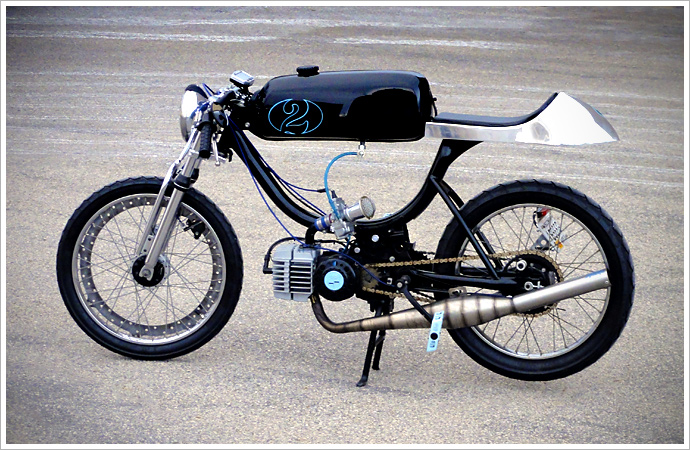 New Year Resolutions. Some people give up smoking crack, others tell themselves they are going to get fit and lose a hundred pounds. Then there are folk that just say they are going to do something different. Like us, we decided to start a New Years Resolution at Pipeburn this year. Can you guess what it was? I’ll give you a clue. Our last post was a trike – which we have never posted before. And now I am posting a moped – which we have posted before but not on a regular basis. Yep, we decided to quit doing drugs and focus on the bikes we truly love. No seriously, we decided to try and surprise our readers with bikes that were a little bit more unexpected. Sure, we’ll still be featuring the usual suspects like the CB750 cafe racers and XS650 bobbers, but we want to be more open to different builds. Like this J.C. Penny Pinto moped they call ‘The Baby Maker’. Nothing gets the ladies hotter than a featherweight cafe’d moped. The owner of this beautiful specimen started building it as a young single man and finished the bike as a young father of twins. True story, almost. Here’s the virile builder Nicholas Voigt with all the facts… “After getting into vintage pedal start mopeds a short two years ago, I set out to build a one-off, café inspired moped that challenged me, and my abilities as a welder, fabricator and painter.  My goal was to do as much of the build independently as I could, with the limited tools available. “The Baby Maker” project is the result of that push to build the best bike that I could, prior to our wonderful twins being born. I started with a 1978 J.C. Penny Pinto moped that I traded a buddy for. After a complete tear down of the bike and motor, I sand blasted everything at a coworker’s countryside shop. Almost all the welding and fabrication was completed at another coworker’s home garage.

Ideally, I wanted to start the build with a rigid model, but none were available at the time so I made my own.  I used a wider swing arm from a Freespirit/Magnum model, welded it onto the frame, then bent and welded in my own rigid struts. With the rear suspension made, I bolted on some chrome aftermarket EBR forks, and proceeded to fabricate the backbone cross bar.  After locating an old Benelli/Montgomery Wards gas tank, I got underway mounting it and fabricating the one-off aluminum café seat. For many years, I’ve wanted to build my own seat or tank and this project was perfect for that.  The top of the seat is formed out of 5 separate pieces all rolled on my scratch build English wheel.” “With the seat and tank mounted, the bike got tore back down and prepped for bodywork and paint, which I completed in my garage.  I was pleased with how the paint turned out, considering the black was Rustoleum spray paint covered with a nice smooth layer of urethane clear coat.  However, the spray bomb would not be used the next time I do a project of this magnitude.

For the front rotor, I wanted to build my own perimeter rotor like you see on Cook Customs, Buells or other custom bikes.  No one, that I had seen, has ever done a moped with a perimeter rotor.  After designing it in Illustrator, I was able to get it converted to a DXF file and laser cut at work. A $15 dollar go-cart caliper was sourced from eBay and mounted to the front forks. ” “While the paint was drying, the motor rebuild started in my basement.  With a clean set of cases, I bored them out and case matched them to fit the 74 cc Gilardoni cylinder kit, high temp paint was applied and cured using my charcoal grill.  Being a one speed, low cc motor, I wanted to get as much power out of it as I could.  I took the main gear and drilled and countersunk over a hundred holes in order to reduce the rotational mass.  I paired my lightened gear with a lightened clutch basket and three-shoe clutch.  This combination allows the engine to get into the power band of the handmade stainless pipe built by Motion Left Mopeds.  A new crank fitted with fresh bearings and seals was set into the cases and everything was sealed and bolted back together.  A Mikuni TM24 was bolted to a custom made intake.  For spark, I used a points set up with internal coil and 12v lighting.  After sanding, shaving and polishing the clutch cover, I also gave the flywheel cover the drilled out treatment. A small blue stripe was painted on the blacked out flywheel, so as the motor turns, you can see the stripe rotate through the holes in the cover.  A nice little touch you don’t see everyday.

With everything painted, polished, and cleaned up, it was time for assembly to take place in my basement. All cables were custom made; all wiring simplified and run through the frame.  LED lighting was used at the rear of the bike on my custom-made license plate bracket. For the headlight, I picked up an aluminum Electro line headlight from the ‘30/40’s, beat the dents out of it and did a semi resto/Polish on it.” “The final touches included the controls, Trailtech digital speedo, and of course the custom number 2 race numbers arranged in an asymmetric manner on the tank and seat. The inspiration for the numbers was influenced by my wife’s pregnancy, with twins, shortly after starting this build.

With the build finished, it was debuted at the Rocker Box 2011 motorcycle show and block party in Milwaukee, Wisconsin. It came away with a made on site trophy for the “Cool as F*ck” award for basically being the best bike. It was definitley an honor to hand build a bike by myself. I couldn’t have done it without parts from 1977 Mopeds and Treatland.tv, help from my buddies R.P. and Kevin and for the use of their shops, Drew for the bike trade, Salty for his many years of expertise building race quality mopeds, Josh “Ruckus” Arndt, and finally my wife Tina, and of course little Collin and Abigail, for putting up with the build for 9 months.”

The irony is, this sweet little moped named ‘the baby maker’ actually took Nicholas nine months to build. You know what else takes nine months to come to life? Yep, we couldn’t have written a better ending to the story -unless of course the twins grow up to be ‘Shinya Kimura’ style bike builders and dedicate their careers to Pipeburn. We’ll keep you posted.

For more on this build check out the thread on moped army.

PS. Your arsecakes deserve the best. Check out our range of Nitroheads Seats in the Pipeburn store.