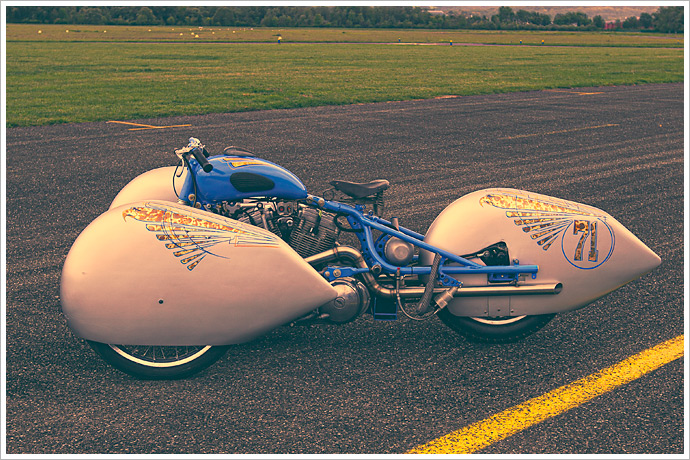 I couldn’t honestly start this story without an admission. I’m not a trike fan and I have openly mocked them in the past – always with superbly hilarious results. Just ask my friends. Some even said I should do stand up. Really.  And can you blame me? How many cool trikes have you all seen in the past? And how many trikes have you seen with purple velvet bench seats, bad fibreglass mouldings and car tires? That’s right; a freaking heap-load. But like a politician raising taxes, I recently had to eat my words after Scott shot me an image of the creation you see here. Obviously it’s a trike, but it’s been done with such a keen eye and good taste that I’m never going to think of trikes in quite the same way again. And the man who is responsible for the foot in my mouth? Meet Francis Bouillet, owner of France’s Kustom and Racer Design Workshop. Here’s Francis. “I’m 40 years old, married with two sons, living in east of France, 5 miles away to Switzerland border line. I joined the French air force 18 years ago as jet fighter navigator, the guy in the back seat who’s in charge of navigation, weapons and targeting… and finding the best way back home! I retired in 2008 and followed the course of Franco SBARRO (concept cars italian Master builder) in the french ESPERA SBARRO school for 10 months. I ‘ve work just after with Dub-Performance which is one of the best French custom motorbike builders. Then I created in the beginning of 2010 my Kustom & Racer Design workshop. I’m working on motorbikes (mainly Harley davidson, Triumph or Ducati and vintage motorbikes) and American and vintage cars.” “The ‘Bonneville Spirit’ project was born during my Sbarro school course in 2009; each student had to propose a personal custom project and build a 1/6th scale model. Instead of presenting an unrealistic model, I decided to work on a future project to be built to promote my workshop. The aim was to join the car and motorbike domains and to build a vehicle with a strong visual image who everybody will remember after seeinmg it. At the same time, “The World’s Fastest Indian” movie made me dream of Bonneville.” “Most of the frame is home made around a stock Sportster engine taken from my motorbike. The front end comes from an old French car built in 1902 and is the oldest part of the trike. It is monted in a “suicide” way as hot rods are and uses wishbones made from magnesium and coming from an old Sikorsky S-55 Chickasaw, and foot rests are parts of an old French Fouga CM 170 Magister jet. Wheel housing are fiberglass home made and exhaust is of course a stainless home made.” “It sounds and runs really cool, and people are still astonished to see me on the road. The driving is almost like a quad; you have to lean into the corners as the frame does not tilt right and left. I have several contacts with SCTA crew and they wish I’ll bring my toy during the Bonneville Speed Week but the shipping is very expensive from France to Utah. I hope being able to make it one day…”