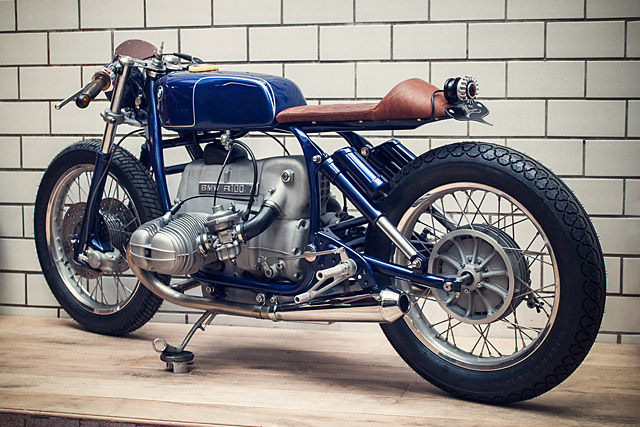 One of our favourite bike builders in Europe is the super talented Dirk Oehlerking from Kingston Customs in Germany. Dirk is a self-proclaimed perfectionist and motorcycle fanatic. Not only was he the German Enduro Champion as a kid, but has owned 36 racing machines over the years. Now he spends his time building unique customs and pioneering the scene in Germany. After finishing his stunning red R75/6 bobber last year, he decided it was time for a new BMW project. “I really wanted to build a BMW café racer build” says Dirk. “A BMW café racer is nothing new, but I wanted it to look very different in the Kingston style.” Well, amongst other things, we think he has definitely nailed the ‘Kingston’ style. To keep with that Kingston style, Dirk has ditched the rather large stock tank for a smaller and leaner Yamaha RD50 tank which was customized to fit. The frame has also been altered to achieve a lower stance which helps gives this café racer its beautiful proportions. Like most of Dirks builds, the engine has been completely rebuilt and brought back to ‘out-of-the-factory’ condition. The engine is breathing through a Norton Universal ‘Dunstall’ style replica silencer. He has chosen classic Metzeler tires 19” on the front and 18” on the back. The café racer bump seat has been custom-built by Kingston and covered in brown leather. Because of Dirk’s racing background he has added some modern features like disc brakes for better braking power. He has redone the electrics and hidden the battery in a custom-made box. There’s also new handlebar controls from Domino and switch gear made from CNC’d aluminum. The lovely little rear tail light was created from an old school BMW exhaust pipe nut. The bike was then finished off in a deep BMW Ocean Blue Metallic paint. Kingston Customs have shown us again that their level of craftsmanship is second to none. But as we all know, it’s not just about the design but how it makes you feel. “It’s not very convenient and it is not great for touring.” says Dirk. “But when you ride the bike, it gives you that incredible feeling of happiness. It puts a smile in your face.” What more could you ask for?