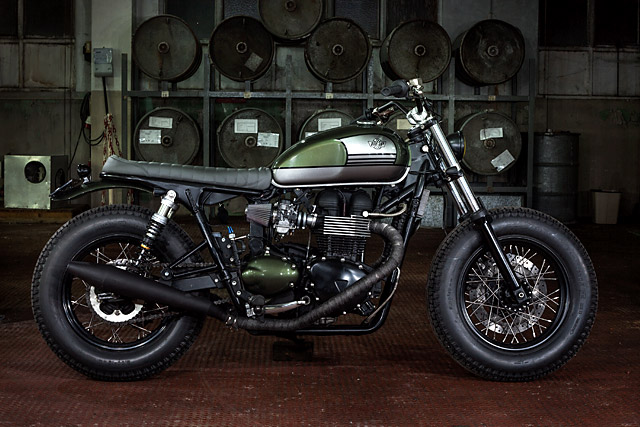 When it comes to custom bike builders in Portugal, there’s only a handful that immediately spring to mind. Porto’s Ton-Up Garage are one of the standouts in a country more famous for producing world class soccer players than world class motorcycles. Their latest bike is named ‘Hiawatha’ and was obviously given that moniker after the legendary American Indian leader who departed down the river on his hand crafted wooden canoe and came back up riding a modified motorcycle – but don’t quote me on that. Or as the guys at Ton-Up put it: “the green tones of nature sprayed the grey ashes left upon Hiawatha’s departure with the seeds of life and warmed by the Sun allowed the peacemaker’s return.” Ok, now pass me that peace pipe. ‘Hiawatha’ was a commissioned build for one of Ton-Ups clients based in Lisbon, Portugal. “He saw one of our previous bikes build upon a Triumph Bonneville – the Urban Pearl and decided he wanted to have his own exclusive Ton-up Garage motorcycle, also using a Triumph Bonneville as a donor bike.” So they went about finding him the perfect donor,  a  second hand 2007 carbs Bonnie and started the build. First up the engine and electronics were worked to deliver more power and torque. The engine was painted black, only painting in green the sprocket cover. Ton-Up also installed a new exhaust system to “give a little more boost to the engine response, along with the K&N air filters.” Ton-up built the rear mudguard and also painted it in the ‘natural’ green colour. They also cut and rebuilt the rear section of the frame to fit the battery, ignition and electric parts and also to go along with their simple seat design. They also fitted a grey handmade Ton-up Garage seat so the buyer could take his partner in crime for rides on the winding Lisbon roads. Also keeping with the inconspicuous theme, they fitted a small speedo, black handlebar and black grips. They also installed a hydraulic clutch lever system and also changed the front brake master cylinder with less volume than the original one. “We also replaced original handlebar commands and switches replacing them for less volume units in black, to become unnoticed” says Ton-Up. “The wheels rims and hubs were coloured in black and we’ve fitted 16” rim on both wheel with classic style tires.The stock rear shocks were replaced by two Ohlins shocks and also the fork springs were changed to Ohlins progressive springs and suspension were tuned to have a better response.”