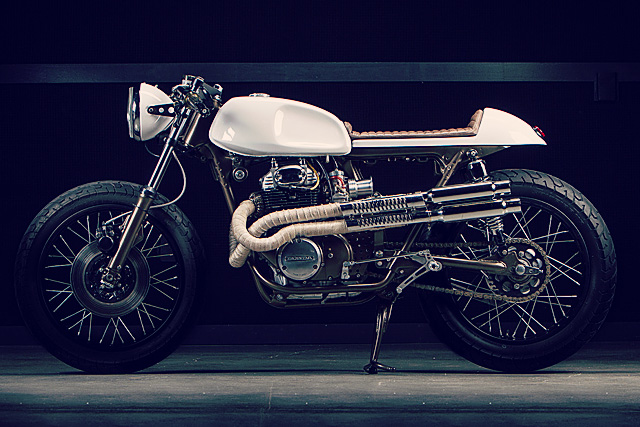 For most of us, our first bike build is a learning experience. It’s as much a lesson in what not to do as it is discovering the aspects of a build we already have a knack for. But if there is an area most of us fall down on with our first attempt at a custom creation, it’s maintaining continuity throughout the build, particularly in the visual aspects. For Miguel Castro, his day job as a Design Director at Rosetta in San Luis Obispo meant this was one aspect where he was never going to have a problem. So what bike would make sense for a first build? Maybe something that’s mechanically simple and yet fun to ride? Something with vintage styling but still capable of carving up the coast roads of Central California? Sure, the humble Honda CL350 (this is a 1969 example) was released as a factory Scrambler, but it has always made much more sense as a Cafe Racer. And here’s the proof. The reason being that despite its basic Scrambler appearance Honda put very little effort into converting the road going CB350 into anything really capable of off-road work. What they did deliver however was a bike that had only the basic necessities, would run all day no matter the abuse you handed out to it and with lightweight and a rev friendly engine was a hoot to ride whether you were going fast or slow. Further evidence of the Honda’s reliability is the fact that when Miguel picked this old girl up, despite her nearing retirement age, she still started first go and purred like a kitten. But having grown up helping his Dad wrench on classic Jaguar’s it wasn’t long before the desire to teardown the bike and create a custom kicked into overdrive. Rather than fluff about making little additions here and there Miguel got right down to business and tore the whole thing down to the bare frame so he had a blank canvas to work from. Knowing his vision he fabricated a rear fender that is incorporated into the frame and finished it off as if it was always meant to be there. Then the seat supports were cleaned up and an extra bracket welded in to support the flush fender that would be hidden under the seat. Also created was a hidden battery box that sits under the seat that would also give Miguel the perfect place to hide all the wiring. With the fab work completed, the tabs he knew he wasn’t going to use were ground off and the frame cleaned up before having it powder coated in a unique dark brown with slight metallic. Not only does it look great the hard finish of powder over paint means that, particularly on a first build, where you are removing components and reattaching them over and over again it’s not going to result in any large scraps or scratches in your fresh finish. So happy with the result he had the swingarm, centre stand, fork legs and a host of other components given the same treatment. Those front forks were fitted up to start creating a roller and the top yoke has been replaced with a billet aluminium item from Cognito Moto. With so many common components between the CL and CB Miguel swapped the CL front drum brake over for the far superior CB front disc and caliper arrangement. Out back new shocks and progressive rate springs with adjustable preload allow the bike to be set up for the rider’s weight and make for a great improvement over the factory items. The tins were next up and even the headlight surround has come in for heavy preparation work to make sure it was absolutely perfect. The seat unit is classic Cafe Racer with a pre-drilled hole in the tail section for an ultra clean look from the rear when it came time to fit a light. But it’s the leather on the seat that is particularly special to Miguel “I wanted to have something on the bike that represented my family who is from Argentina. The leather was actually taken from a jacket I purchased on my first trip out there.” The reworked tank for even more Cafe styling is brilliant stuff for a first time build, with clean recesses for the knees perfectly sculpted and it and the rest of the bodywork was then sprayed in white by a friend who used a single stage finish with no clear for some old Hot Rod appeal. The CL’s engine may have come to Miguel running sweetly but he wasn’t going to leave it stock with some extra ponies easy to extract from the square bore 325cc. The old Keihin’s have been given the heave-ho with higher flowing and more tunable Mikuni VM30’s fitted up. A beautiful set of milled velocity stacks give a nice induction roar but nothing sounds quite as good as those signature side mounted CL pipes, heat wrapped to prevent leg scolding pipeburn and finished with a pair of dual chrome mufflers. Pamco Ignition brings the spark into the 21st century with its integrated microprocessor and the switch away from the old power robbing and unreliable mechanical advance. Miguel has even gone to the trouble of completely rewiring the bike with the battery and starter solenoid hidden in the box he’d fabricated earlier. Now with some extra grunt to spin the rear tyre nothing but spoked wheels would do the job as rolling stock and Miguel spent considerable time cleaning and polishing the hubs to remove decades of grease and grime. These have been given a shot of black paint on the inner face before being laced up to new black rims with stainless steel spokes and then wrapped in Bridgestone Spitfire tyres. New machined rearsets with linkages to suit the CL and a set of clip-ons mounted to the forks now get the riding position tucked in neatly, as opposed to the less than speedy wind sock effect of the standard sit up and beg seating position. The rest of the build is kept as purposeful as Mr Honda intended with new levers and gum grips just some of the parts sourced from the lads at Dime City Cycles to finish out the build. One thing Miguel has noticed as he races around the streets on his Cafe’d out CL350 is the distinct lack of custom shops on the central California coastline that separates the big cities of Los Angeles and San Francisco. So with his years of design experience behind him, automotive skills honed on the best of British automotive, and a bike build proof positive he can spin the spanners, he’s founded Dia De Los Motos and is already well on the way with his next build, a mono-shocked CB350. With that perfect California weather and a host of long and winding roads in the area, it would be criminal for more Central Cal locals not to join him and make everyday a day of the motorcycle.