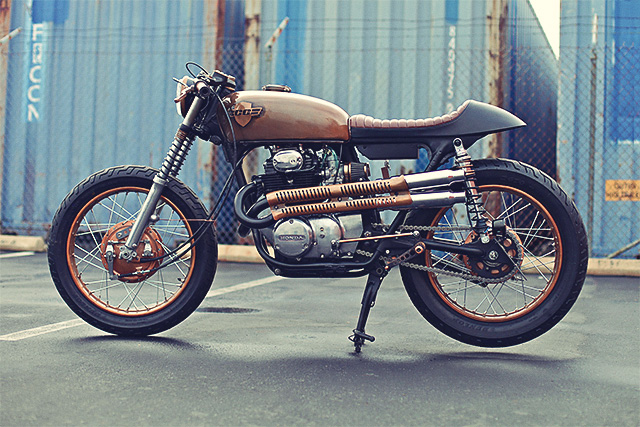 Copper is a deceptively difficult colour to pull off on a custom bike. For all the wins we’ve spotted over the years, we also see a hell  of a lot of gaudy, steam punk train wrecks that succeed in being beautiful the same way an unwashed, Victorian-era guttersnipe succeeds in being British royalty. But prepare yourself for a masterclass in metal patina. Using the transparent powder coating, Chappell Customs have managed to make a finished product that takes the look to another level. Queen Vic herself would be proud. It’s been a busy past few years for Chappell to say the least. Between moving shops and launching their own brand of hand-made seats, it must be hard for them to find the time to build bikes these days. But when inspiration strikes and a great bike just happens to fall into your lap, then there always seems to be time. “One of the guys that works for me had this little 1972 CB350 kicking around the shop,” says Chris. “We were literally tripping over it, so I offered to buy it from him.” “The frame had already been de-tabbed and powder coated matte black before I got it, so I decided to leave it alone. The wheels and all the other parts were also in black, but I didn’t dig the color scheme. Instead, I wanted something antique and expensive-looking.” Chris had some transparent copper powder left over from a previous job, so he decided to try it out on the hubs and wheels first. “It looked amazing, so that’s what prompted me to do the fuel tank as well.” As anyone who has tried it will know, transparent powder coating shows all the metal finishing marks and imperfections, so Chris spent a bunch of hours sanding, scuffing and polishing the metal to give it the unique, weathered finish you see here. “The engine was already rebuilt and ready to go, so we soda blasted all the old paint and dirt away, polished all the covers and re-painted it black.” Chris then built the nifty little battery box you can see located under the seat and went about rewiring the bike from scratch.

“We had previously traded the stock pipes for these scrambler units so again, we just used what we had on hand. Some shorty glass-packed mufflers and a dusting of high temperature powder coat on the headers made them fit nicely.” Not needing the old ‘bar mounts, Chris milled the top triple down, added a copper block-off plate and bracket-mounted the speedo on the side of the bike.

Wanting something industrial for the forks, Chris called on Pierre from Works Performance. He came by the shop with some killer, Manx-style external front fork springs and after a little measuring, the forks were ripped apart and the stock internal springs were removed. The new external fork springs got more copper on the top and matte black down below. “The rear suspension is a custom set of billet ‘Works Performance’ dual-rate shocks; we also talked them into giving us some more raw metal springs that we were then able to match up to the rears.” Next up was the seat. “We took one of our own ‘Tuffside’ seat pans off the shelf, form fitted the foam to fill the hole in the tank, added our mounting system and then upholstered it with genuine leather that we had left over from our Enfield project. At the same time we made up some leather grip covers and added a little leather bling to the otherwise boring gas cap.” The final step was the side-mounted license plate and brake light holder. “We knocked it out in no time flat and took the bike out for a rip or two to enjoy the fruits of our labour.”

For those interested, Chris also mentioned that the bike will ultimately be for sale. “But for now, it’s just fun as hell to ride around on.” Don’t hold your breath, then.