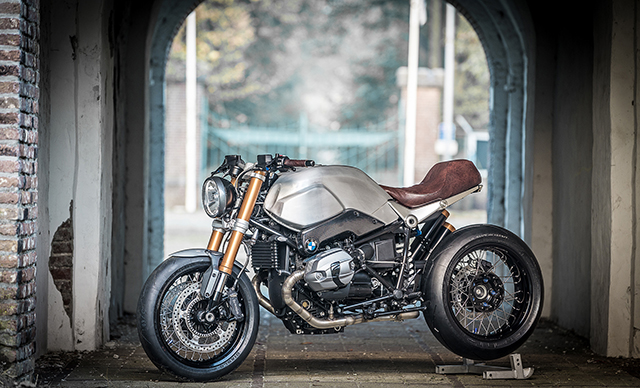 In the crowded world of the custom motorcycle scene new builders can easily be lost in the mix of high end builds and the well-established big names of the industry. So when Smokin’ Motorcycles of Rotterdam completed their third build and first to be revealed to the public they knew to make their mark they had to go all out. Enter build #003 Elegant Bastard; A BMW R nine T, with CAD designed parts, CNC machining, hand formed aluminium and leather from an African Antelope. It’s just the kind of splash that levels plenty of ripples and still scores a perfect 10! Maarten Timmer and Rob van der Heijden the men behind Smokin’ Motorcycles submitted a design to the BMW Soul Fuel Challenge, a custom build off contest. With their concept chosen as just one of three finalists they were facing elite competition and knew this build had to be perfection. In 2014 the nineT is a perfect platform being the best new manufacturers offering to the custom scene. The idea was not to go overboard and leave fans with a bike that barely resembled a BMW, but to refine the machine even further, show off their craftsmanship and build the perfect bike. The tank and sub frame may at first appear to be stock, but that’s only because the boys first 3D scanned them into their CAD software to give them a reference point for their custom creations. The tank itself is beautifully hand formed aluminium with welds to die for. While the new sub frame allows for the factory mounting points to be used but is longer and sleeker in design. This is the sort of work you need to be capable of to impress the boffins at Bavarian Motor Works. The CNC milling allowing for the perfect recess for the rear taillight and an exact match to the seat pan they had in mind. Speaking of the seat it is entirely hand shaped from a single piece before being meticulously covered in African Antelope leather by Fred de la Bretoniere. Fred is a show maker and cleverly handstitched the back of the seat with thick thread to give the appearance of an old baseball glove, with the hand grips receiving the exact same treatment. Breaking up the high tech components and CNC machining this is the aspect of the bike that inspired the builder’s to give it a bastard name. But the high end components are not finished with, the upper triple tree is completely new, CAD designed and CNC machined in house. Not only does it look amazing the lower risers drop the height 4cm, the perfect match for the flat look Rizoma bars. Still at the front end the forks were completely de-anodized so they could be colour matched to other parts of the bike. And those parts take the form of the muffler tips which are just the cherry on the sundae of what is an incredible exhaust. Completely hand made the exhaust hugs the curves of the BMW more tightly with the balance pipe moved backwards to increase torque at low rpm, before finishing out at the two black anodized mufflers. Wrapping the build up are an assortment of black Rizoma parts like clutch and brake levers, indicators and a fuel and oil cap with the same ultra subtle blue detailing seen in other areas of the bike. This is the sort of build that at first looks like a brilliant piece of custom building, but take the time to look closely and study the detail and you soon realise that the boys of Smokin’ Motorcycles are modern day engineering marvels with a touch of handmade craftsmanship that would make builders of old smile with pride.