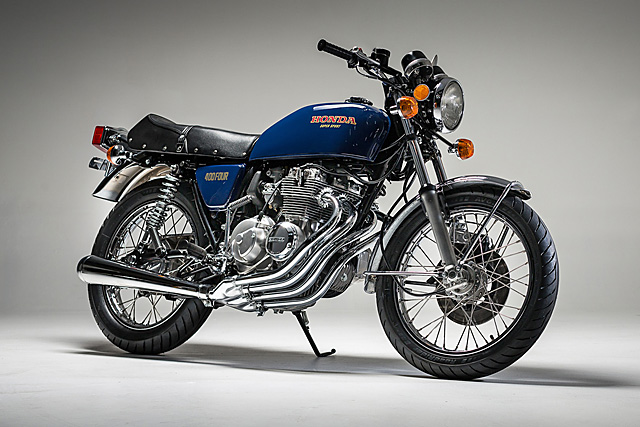 It took two decades, three attempts, and a lot of downtime in between, but when Stephen Bond found Brisbane’s Ellaspede Custom Motorcycles on the net, he knew he had just the builders to complete his brilliant 1977 Honda CB400Four restoration. See, Stephen’s had a love of the Four for a long time. Many years ago, he would buy and sell them for parts to make some extra money. Then, while at Townsville University in 1995, he found this particular example and decided it would be the perfect candidate for a full-on restoration. So naturally he stripped it down to individual components, packaged it up in milk crates and let it sit for 10 long years. Then in 2005, while living in Sydney, it appeared the Honda would finally get the love it deserved. But no sooner had he started when an overseas job offer again put it all hold for 8 more years. It could have been one of those projects that never eventuated, but when in 2013 Stephen connected with Ellaspede in Brisbane he found just the right partners in crime to bring this concourse style build to life. Having previously owned six other 400Fs Stephen brought with him to the Ellaspede workshop boxes of parts that the lads combed through to find the best of each with which to use on this bike. Being such a 400F enthusiast Stephen wanted a thorough rebuild, he’d waited a long time and no corners were to be cut. But that’s the way Ellaspede build their bikes anyway and so with the best bits selected and a host of new genuine Honda parts all was ready to roll. With a bare frame to work with, it’s obvious just how much time and effort was taken to get each step right, with even the engine plate given the same black coat as the frame and fitted with new bolts. But the real beauty that catches your eye first are those tins, the arrow straight tank and side covers finished in Varnish Blue, with genuine Honda graphics in all the right places. Where some give up on the factory fenders, fill and paint them, Stephen’s bike was not that sort of build and is evident in the exquisite fit and finish of the front guard and rear fender that also features the chromed tail light support. That tail light joins an array of perfect OEM Honda lights that further adds to the concourse like quality of this build. Anyone who has tried to source NOS parts knows what it’s like to find just one item, but the effort here to find or restore and then fit as new items from the indicators front and rear, to the classic Honda mirrors and kickstart means every photo brings a new level of appreciation for this bike. The instrument cluster and headlight is just as impressive and even the writing below each idiot light is not missing even a speck of paint. The factory seat is just as impressive with the passenger strap buckles a hint of a motorcycle from the final era before plastic parts and automated assembly lines really took over. If there was one element of the CB400F that set it apart from its competition it was it’s engine, a 408cc, transverse mounted, 4 cylinder it was one of the early pioneers of the SuperSport category that is so successful today. It was smooth and reliable, yet capable of the ton, screaming beautifully to a 10k redline without any of the oil leaks or smoke of its competition. “The ‘whoop’ sound produced when the 408 is doing its siren song at 10,000rpm is enough to convince anybody that Honda’s smallest ‘F’ is more than an ordinary two-wheeler.” Cycle World, July 1976. Then there are those pipes, that make that brilliant sound, the exquisite 4 into 1 design with a staggered collector for near on equal length. It’s simply a thing of a beauty, an iconic masterpiece, so good that few aftermarket pipes for the model were as good as the originals and Ellaspede has ensured they are in concourse condition. To squeeze some extra ponies out of the screaming four Ellaspede kicked the capacity up with a 460cc kit and then ported and polished the head which has been fitted with performance valve springs. Before reassembly all components were hydro-blasted and balanced before being bolted back together with new gaskets, seals and bearings for years of trouble-free riding. The bank of four 20mm Mikuni carbs have been rebuilt and cleaned up a treat and breathe through a factory airbox. Of course you can’t build such a high level bike with an old rats nest of a wiring loom, so a new item was sourced from Honda, along with new ignition points, leads and plugs. The final polish and clean, the hard to find mint condition carb boots, new bolts and screws throughout result in an engine looking as good as showroom new. Despite being a back to factory restoration the suspension and brakes weren’t ignored in the rebuild process and Ellaspede incorporated a few tricks to gain improvements. The telescopic factory front forks have been thoroughly rebuilt with an emulator valve kit and new springs dropped in. To match the front ends looks and performance a new set of twin rear shocks has been installed and shine in their perfect chrome finish. When it came to braking Honda was determined to keep it simple on the CB400F, low weight and service costs the same. Ellaspede fitted up a new caliper and a set of performance pads to improve the stopping power and with an original rotor cover the factory look is brilliantly retained. The finishing touch to the build comes with the classic spoked rims being wrapped in modern Avon Roadrider tyres that let Stephen push that little bit harder than you would have dared on the old school rubber. And with that Ellaspede delivered the perfectly restored Honda CB400Four that Stephen had waited 20 years to climb aboard. It’s a credit to all involved that in an era of cut up frames and high-tech components that one of the true classic Japanese SuperSports has been restored to such a level. The story ends with just one twist, the Ellaspede boys on Stephen’s arm, trying to convince him that the other old Four he has in his garage should be sent in for the custom treatment, do it Stephen, we’ll be waiting.