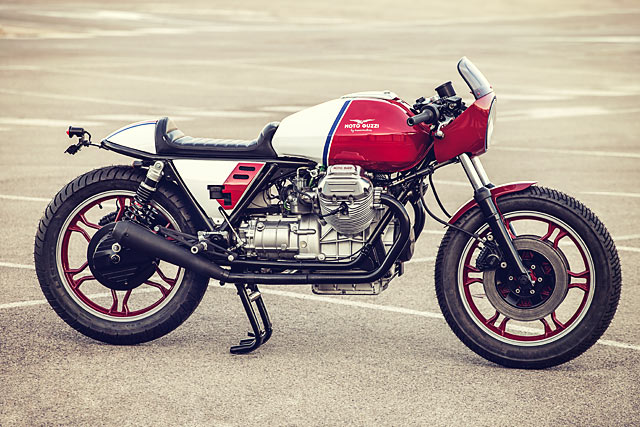 Italian designs are regarded globally across many industries as things of beauty and their designer’s trendsetters around the world. Many companies might produce a product where labour is cheap but are sure to include “Designed in Italy” on the label. Asked about this phenomenon Italian Architect and designer Luigi Caccia Dominioni stated “Quite simply, we are the best” and that “We have more imagination, more culture, and are better mediators between the past and the future.” Ok then, but clearly Luigi didn’t ever see an early ’80s Moto Guzzi ride by, horrific then and even worse today. So when a lover of the marque bought a 1982 1000 SP he was quick to call on Macco Motors to let the Spanish lads turn out this beautiful cafe racer from the bones of a machine were the Italian’s had quite clearly dropped the ball. The owner of this machine has more than a little love for Moto Guzzi; he owns a nice collection with some of them purpose-built for competition. But when he test rode this ‘82 1000 SP, even he wouldn’t be seen dead on the thing in stock form. “The thing is that we laughed when he told us that he had bought the 1000 SP and tested it in his building’s car park, because he felt ashamed of riding the bike as it was,” laughs Jose, who along with Tito make up Spain’s Macco Motors. It’s easy to understand the shame, horrible fenders front and rear, an enormous front fairing that had to have been designed with a ruler and some of the ugliest engine covers you’re ever likely to see. But the Triumph specialists at Macco weren’t daunted by the task, because under the body work of any Moto Guzzi lies the foundation of any great bike, brilliant mechanicals! But before they could get to the engine they first had to sit down at the computer with their client and using Photoshop come up with a design everybody agreed upon. With the drawings finalised the SP came under attack with all the bodywork and assorted ’80s ugliness pulled off and shown the door. The bare frame then had the subframe cut off and all the old welds smoothed out. To replace the big factory rear end a new arrow shaped subframe was fabricated and welded in place. Before the whole frame was de-tabbed and sprayed in a hard-wearing black enamel paint. “The 1000 SP tank is not the most beautiful Guzzi tank for sure but the customer wanted to keep it,” Jose tells us. So to help alleviate the direct impact of some of its squarer lines a new cafe racer styled tail section was crafted out of steel that gives the bikes bodywork a more flowing feel. Macco hand makes all their own seats and this double stitched black leather number is as good as any. The brilliant design creating a seamless connection between front and rear by rising slightly up the rear of the tank. Moto Guzzi GT fairing they were quick to discover, despite promises, that it didn’t fit. The small fairing was what they wanted however, so with air tools spinning they managed to shape it to work with the SP front end. The front guard is of their own design and made in-house from fibreglass and having made batches of vented side covers from fibreglass for Triumph’s they did the same for the SP. With all that bare steel and glass work finished it was time for paint, “We came up with the white, red and blue colours and a racing/street paint scheme,” explains Jose. With the major body work taken care of and the aesthetics something the owner could be more than proud of, Macco turned to making the Guzzi ride just as well. That all starts with the very best bit of the factory bike; the locomotive like 949cc V-Twin engine with two bolt mains and a forged crankshaft. Not only did it rev well for a big twin it was also unbelievably reliable. The engine fitted to the SP series was designed like a car engine, drop the sump and you can service the bottom end with just a few basic tools. But such an engine deserves to have a few extra ponies so Jose and Tito rebuilt and re-jetted the factory Dell’Orto carbs before fitting them with a set of K&N pod filters. The exhaust is a neat 2 into 2 system with the centre pipes running parallel to the frame in matching black before finishing out with twin reverse cone mufflers. Not surprisingly the early ’80s Italian electricals were not so good, so the entire loom was pulled from the bike and rebuilt from scratch. A lightweight battery features at one end of the loom with modern switchblocks finishing things out. Those switches sit on a set of 22mm clip-on bars that transform the look of the front end and do away with the Italian chopper versions from the factory. But that still left the ugly yoke, for which Jose had a plan, “We worked on the original top yoke. Cut the handlebar risers and weld it up to get a plain and clean surface.” A new set of levers is joined on the bars by a larger master cylinder and Avon grips. While all the lighting has been upgraded with a classic 6 inch headlight poking through the fairing, mini indicators and an old school tail light. With the controls now far more racer than chopper the rearsets have been switched out for Tarozzi items and the ignition relocated so the owner doesn’t wear the key in the chin! With some hard riding planned the front telescopic forks have been lowered and rebuilt while the rear shocks take a drastic turn for the better with a set of one-off YSS shocks that give a nice level of adjustability. The factory wheels have been painted body matching deep red before being wrapped in Metzeler Lasertec rubber. The result is a cafe racer the owner never has to be ashamed of, free to venture far beyond the walls of his complexes car park. While for Jose and Tito it’s another win for their Macco Motors garage and they send this Guzzi home marked “Designed in Spain.”