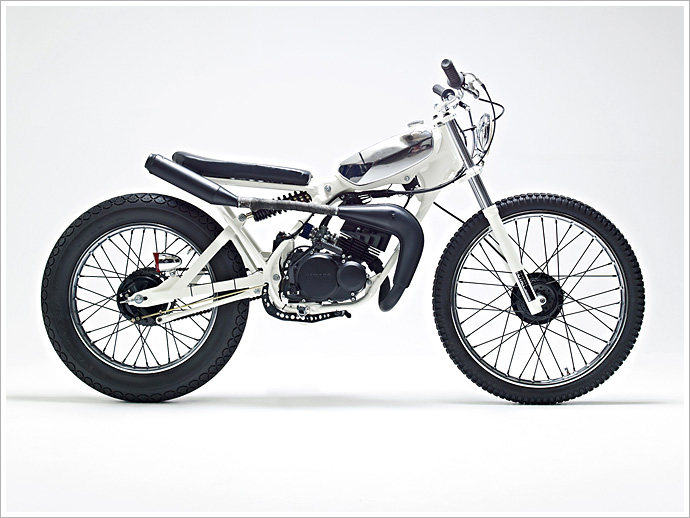 Is it me, or are there a heap load of cool ‘peds dropping lately? Although Scott and I are closet moped fans, we’ve always told ourselves that the bikes we chose to feature on Pipeburn would consist mainly of the motorbike variety, and that we’d only feature the odd moped that took our fancy. Now, looking back at the bikes we’ve posted, I see three mopeds in the last month. All killer examples oh just how cool the bikes coming out of the scene really are. Well stand back, because here’s another blow-your-socks-off example. She belongs to Swede Hakan Persson and to our eyes she could just be the most amazing moped/trial/MX bike we’ve ever seen. Either that, or the cocaine we just did is affecting our judgement. Greetings to Håkan. “I’ve always been into creating, tinkering and changing things into what I want them to be, getting them to look the way I want. Based on that fact I guess that my choice of profession came quite naturally. At daytime I’m running a design agency called ‘Kollor Design Agency’ here in Sweden and on my spare time I build and restore Italian sports cars, mainly Alfa Romeo’s . This is my second attempt to build a bike. I’ve actually not been in contact with bikes at all before but a friend of mine kind of pushed me into trying one of his. After my first project which was a modified ‘Ciao Bravo’ I got hooked.” “I bought the bike more or less stock. It was in terrible condition and almost everything had to be repaired or exchanged for new parts. After a couple of weeks tinkering with it and trying to get it to run properly I was about to give up on it. I ended up with the thought – ‘either I will scrap it or go all in.’” “Said and done, called up my friend Marcus and he had a look at it. Giving me some positive feedback, exactly what I needed at that time – I guess! He also provided me with the back tire and the handlebars. I cleaned up the frame, made some minor reinforcements, talked to a fiend in Berlin who came up with the name after I told him about the project – ‘Cocaine White’ (It’s fast and it’s white).” “…got a broken skateboard to use as base
for the saddle. Mum did the upholstery”

“Getting the name on the bike was another thing I wanted to ‘outsource’, called up two graffiti artists that I’ve known from childhood – got them involved. Talked to another friend who runs a local skate shop and got a broken skateboard to use as base for the saddle. Mum did the upholstery, thanks!” I called up our agency’s photographer and told him about the project, he’s into bikes also and was happy to help me out with the photos. Actually, come think of it (while writing this), getting some of my friends and family involved in the build was one of the highpoints in this project.” Update 1: Although Håkan did call his creation a moped, looking at the original DT50MX I’m thinking that, as mentioned, this is more of a dirt/trials bike than a ‘ped. Put it down to “lost in translation”.

Update 2: Not so dumb after all! From Håkan: “Hi Andrew! Thanx for the very nice post. Very happy that you liked it so much! 🙂

Seen that some people question if it really is a moped. A bit tricky question actually, here in Sweden moped do not need pedals to be dubbed “moped” and the Yamaha DT50MX, was altered quite a bit to fit into our laws: compression lowered, gearing, restrictions in exhaust, one gear removed. (As far as i know)

We have two classes of mopeds here:

With a Class 2 moped you are allowed to drive more or less like when you are driving a bicycle.

Hope that clears it up a bit 🙂