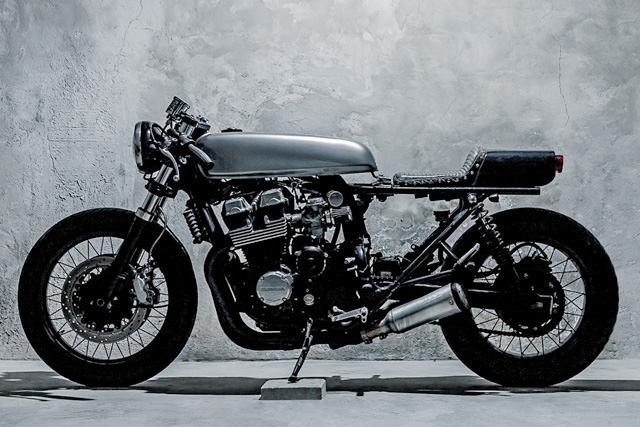 Tanks and seats. If you had to distill down the art of the custom motorcycle, moonshine-like, to its base elements in a concentrated form I’d argue the toss that tanks and seats is where you’d get to. Sure you’ve got wheels, tyres, bars and a whole cavalcade of other minutia you can tweak to make things look like this or that, but get the seat and tank wrong and it’s goodnight nurse. So when Barcelona-based De Palma Cycles told us they had a build inspired by the Honda RC110, arguable the world’s best ever tank-and-seat combo, we were more than a little excited. And then we saw the bike. De Palma Cycles is a project by Barcelona-based designer Gregorio Fernandez. Amongst the things, Gregorio’s states his main influences as “rock, post punk and punk music. And early motorcycle gangs.” This is how the Honda you see here, a.k.a. the “De Palma 01” was born; in a whirl of denim, studs and bad attitudes. No wonder it came out so well. “As a solid starting point for the build, the chosen base bike was a Honda 750 from 1992 that we think nicely combines reliability and design,” says Grego. “The engine was replaced with one of the last of the 750 series from the year 2000 with less than 20,000 km on it, and then we painted in black.” In our humble opinion, that’s always a good thing.

And it’s not just the engine mods that were extensive. “The first and most important one was finding a lighter and more classic gas tank. It ended up being a replica of a metallic Honda RC110, one of my all-time favorite models. The change required a modification to the chassis, drawing a horizontal line from the tank to the seat in a very similar way to the classic Soichiro design. This first change was spot on and defined most of the customizations that followed.” The next step was addition of a fork set from a Honda CBR900 Fireblade. “I have a special predilection for these forks; I love their classic design, length and overall quality. The calipers were kept as they were – the original CBR 900 4 pistons Nissins. The original rear brake was also kept, but we handcrafted a new flat disc that gave a harsher, more 70s look.”

The new seat unit was made in steel and topped off with leather and metallic rivets; the idea behind the steel and keeping it flat was to keep the two seat option if the need ever arose. It’s topped of with a round tail light to again reference the 70s style that Grego was looking for. “The pipes, a 4-into-2 set-up, have been shortened and painted in black as have most of the other parts. The mufflers have been changed for a par of Supertrapps in an aluminium finish and the air box has been replaced by cone filters. The battery is hidden in the hub of the swing arm and the speedometer was simplified.”

Overall, we love how De Palma Cycles have achieved a modern bike build with solid performance while still oozing that classic rock ‘n’ roll spirit. “We’ll keep this overall feel for our next projects; a Guzzi V50 III Monza and a Morini 350 sport.” We can’t wait.