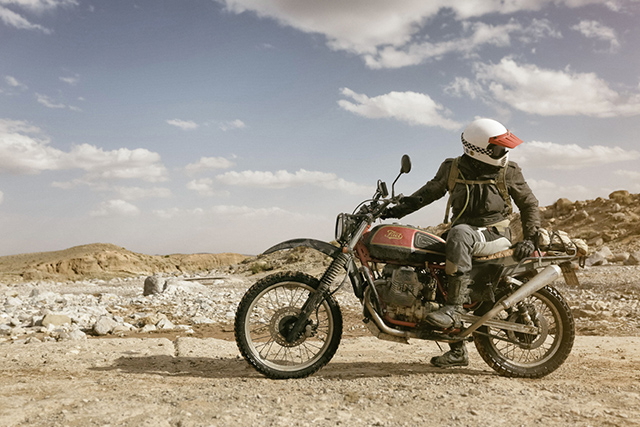 Scram Africa is like no other motorcycle ride on the planet. It’s a 2500km trip along some of the most epic roads, trails and sand dunes through the south of Morocco and across the Altas mountains. To make it even more challenging, the ride is only for classic and neoclassic enduro bikes and scramblers. Scram is the brainchild of Karles from Fuel Motorcycles in Spain, he wanted to build a classic looking bike that could handle the tough terrain for the recent 2016 ride. This time though, his choice of donor bike wasn’t one of the usual suspects.

Turns out in the 80s, Guzzi saw the success of the BMW R80G/S in the Dakar races, and decided to have a shot at building their own enduro bike. What they created was the Moto Guzzi V65 Tutto Terreno – a plastic coated machine that fit so well into the time period that it didn’t make much of an impression outside of it. Until now. Karles decided the V65 TT would make a good choice, albeit with a flavour of his own. The crew at Fuel Motorcycles sure know how to build a decent off roader, with a history of rooster-tailing Beemers in their wake. So when it comes to customising a ride for the dirt, Fuel Motorcycles knowing what a good off road bike needs, just as importantly, what they don’t need. Shaft driven, tried and tested motor, high ground clearance, the Tutto Terreno makes for a good platform to build an enduro bike from. Ditching the Guzzi front end, a Honda Dominator forkset has been mounted up, running a 21 inch rim wrapped in Heidenau K60 rubber. At the rear, the factory suspension has been replaced by Betor motocross componentry, allowing for longer suspension travel. All the effort put into the suspension paid off, according to Karles ; “The bike behaved beautifully in the dunes of southern Morocco, with it’s light weight and increased suspension travel.” Stripped of it’s polyethylene bodywork, the Tonti designed frame shared with the road going V65 is revealed to the world. And it’s too nice a frame to be hidden away. In light of this, a minimalist yet comfortable seat was manufactured and mounted up, along with an offroad ducktail that follows the lines of the seat. Flanking the tail, two Dunstall silencers point skywards –allowing for both form and function. With the Guzzi fuel tank gone, a suitable replacement (after a little modification) was found in the form of a 1970 Triumph unit, giving a couple of extra litres of capacity over the Italian tank. A cool touch is the dual headlight system from a slab side Gixxer from 1988, giving that enduro aesthetic that Karles was aiming for with the machine. This bike was built to ride, and it has been ridden hard. The studio photos featured in this article are shots of the Guzzi fresh from it’s 2500km ride in the Scram Africa 2016 race. As Karles from Fuel put it, “it’s not just a trail bike, it’s not just a scrambler, nor is it just a dirt track racer. It’s all of these things, and that big headlight reminds us of those bikes they used to ride in the Baja 1000.” Built for the dirt, engineered for fun, this is one Tutto Terreno that won’t fade into the background.