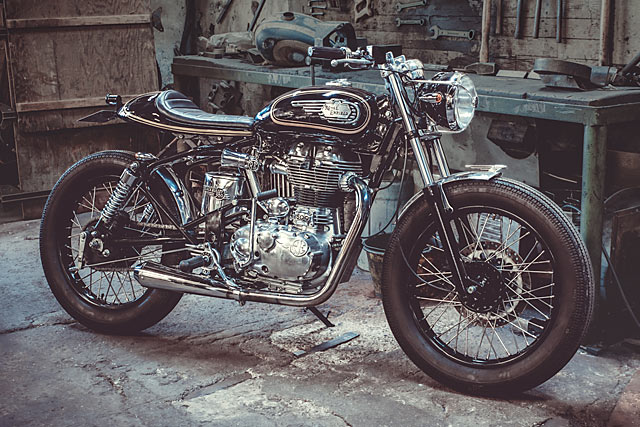 When you receive an email talking about a man from a small village in Southern France who used old fashion forging techniques, a crucible and sand moulds your mind starts to wander. Is this a 19th century inventor who burned his home down trying to create some delusionary dream? Perhaps a 16th century sword maker working for one of the 4000-odd aristocrats who died in duels during the reign of Henry IV? But no.  It is in fact the work of Nicolas Baux, a CAD Designer by trade, who in 2016 revived some of the oldest metal working techniques to produce a staggering one hundred individually handcrafted parts for his custom motorcycle. The result is a modern machine with historic roots, a Royal Enfield Black Bullet from his new company, Motocyclette Certifiée Non Conforme. Doesn’t everything just sound cooler in French? But this is only the second motorcycle that Nicolas has ever built and the first under the MCNC banner. He started with a Honda CR500 donk slapped into a CRF450 frame that gives our French friend plenty of off-road fun. But Nicolas wanted to try his hand at a bunch of truly old school manufacturing techniques in his back shed and an Enfield made for the perfect cafe racer canvas. “To make the special parts, I used several techniques: turning, milling, rolling, chemical etching, thermoforming and aluminium foundry. I had never in my life made a foundry, so I learned all about the different techniques,” explains an enthusiastic Nic. Part of the look he wanted to create was to centralise the mass and keep things simple; two wheels at each end and a lump of an engine in the middle. To help achieve this the stock swingarm has been extended by 80mm. While exposing even more tyre comes courtesy of ditching the big fender and totally removing the factory subframe. In its place is an all new item that Nic crafted that would allow his new tail section to float above the rear end. “The original Bullet is a beautiful motorcycle, but I wanted to refine the model to the maximum, with a race style but also elegant,” says Nic. So the tail section takes on a very racey cafe style with its form-fitting, flowing lines matching the rear half of the tank. The seat itself is one of the few pieces that he didn’t make himself. The leather work being handled by his friend and master craftsman AKOTABE who uses old school methods to stretch and stitch together incredible seats. The standard tank remains in place with Nic keen to retain that distinctive aspect of Enfield styling. While the deep glossy black paint with gold pinstripes is applied across the stock RE body work, headlight shell and new tail section. But the fuel tank badges are of Nic’s own creation, cast from aluminium, like many other parts on the bike and he describes the process. “I made myself an oven, a crucible, and with charcoal activated with a hair dryer, I melted aluminium tips about 700°C. What a pleasure to learn! It is then necessary to cast this molten aluminium in a sand mould obtained by means of a model, itself carved by hand in a special resin, which works much like wood.” It’s beyond impressive for a first time effort and the stunning Royal Enfield headlight badge was next to follow.

The heavily bobbed fenders front and rear were mounted up, with a tyre hugging finish before the sand casting of aluminium parts got into full swing. The Royal Enfield fender ornament was the first to come out of the mould, with a set of Black Bullet fuse box logos quick to follow. The foot peg mounts are simply brilliant, not only are each individually made and marked (Brake and Gear) but the heel guards are the pièce de résistance forming the Royal Enfield’s famous winged logo. [superquote]“the engine comes from the factory with no shortage of badging and emblems. But Nicolas deemed them unworthy of this motorcycle”[/superquote]

Like much of the standard machine, the engine comes from the factory with no shortage of badging and emblems. But created out of stamped plate Nicolas deemed them “unworthy of this motorcycle”. So more moulds were made and aluminium poured in to create the two side cover badges and the “500” logo at the bottom of the barrel. The throttle body receives its own Royal Enfield badge while another metal shaping approach was used to create a turned MCNC velocity stack. The exhaust is relatively simple in comparison with the stock header pipe holding the O2 sensor before running back to a polished reverse cone muffler.

While the suspension remains largely stock the upper triple clamp was designed by Nicolas in a CAD program and then machined at his work place. But this was just the first step in simplifying the front end of the bike. The wiring harness was removed and heavily modified with the switchblock from the right side of the bars no longer required. This is because he’s created his own MCNC starter button that is cleverly hidden under the cast steering stem nut. Not happy with the left side switch gear, Nic did what Nic does; he made his own and it’s absolutely brilliant.

A set of black vintage grips was added to the bars with a much more befitting classic tail light mounted out the back, replacing the enormous stock item. Bullet indicators are mounted up to the side of the headlight and above the rear shocks and the modern retro machine takes on a considerably more classic cafe vibe than even the factory could muster. The final piece of the puzzle was to strip the hubs down and rebuild the wheels with stainless spokes and blacked out rims. Before wrapping the whole thing up in vintage style tyres from Shinko. “All this work took me over 9 months, because I worked only on weekends and sometimes in the evening after my regular job. It was a pleasure to work on this bike, which I enjoy to ride now, I’ve ridden more than 1200km in four months, always with a big smile on my face,” grins an obviously thrilled Nicolas. And you can’t blame him; creating such a machine at home with just his second build is a monumental achievement. To have crafted over one hundred individual parts by hand using such unique methods has instantly forged a reputation for MCNC that will no doubt last for years to come.