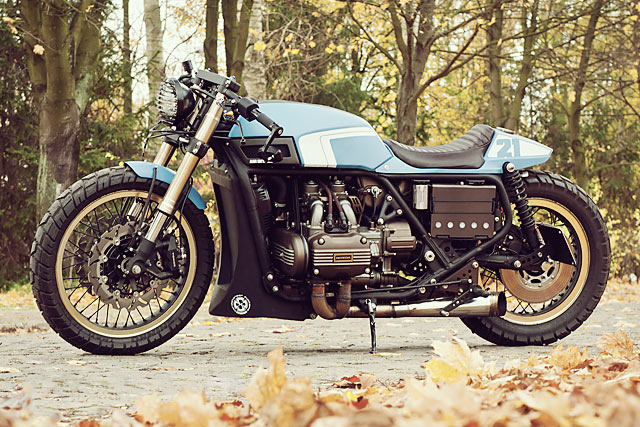 Whenever I think of big Honda tourers I think of the hulking modern ones. You’ve probably seen them – they’re hard to miss. They have stereos, airbags, a reverse gear, heated seats and air conditioning. Honda call it the ‘Gold Wing’ but I usually refer to it as ‘Just go buy a goddamn car’. But the earlier 70’s models are something else. They were still monstrous bikes for their time, but they were simpler, mile-munching naked cruisers. And that’s what Poland’s Cardsharper Customs have tackled – a 1975 Honda GL1000 dubbed ‘Cestus’. Unless you’re a student of ancient history or a gladiator with half your face punched off, you’re unlikely to know what a cestus is. It was a Roman boxing glove, a series of leather straps wrapped around iron spikes or plates used in battle and for domestic. Apparently boxing with cestuses was a popular bloodsport two thousand years ago before it was banned.

[superquote]“Unless you’re a student of ancient history or a gladiator with half your face punched off, you’re unlikely to know what a cestus is.”[/superquote] The name makes sense now with the attitude of Cardsharper’s new creation, but it wouldn’t have suited the original bike so well. The GL1000 was Honda riding full tilt into the US market in the 70’s after the screaming success of the CB750. The CB was the first production bike to combine good handling, a reliable powerplant, excellent brakes and a complete dearth of personality into the one easy, low-maintenance package. Compared to that the GL was designed to be a powerful highway bomber, able to eat up miles on the US interstate. It was a big ol’ powerful machine, but wasn’t no cestus. The early Gold Wing also found some success in Europe, and this old example was provided to Cardsharper by a customer, who took it to the Lublin-based workshop for them to work their magic. The client was after a particular style of build, but ‘the customer is always right’ doesn’t necessarily ring true with Jacek Mulak, head of Cardsharper. “The customer delivered the motorcycle, he wanted something in the café racer style,” Jacek says. “But I’m not going to limit myself with what a café racer should or should not have. Right from the start I offered to go for something aggressive, dynamic and beefy. I wanted some sharp and firm lines.” Looking at the finished product, it looks like Jacek convinced him. And we’re all the better for it. [superquote]“The standard Gold Wing used the tank as a shroud for fuses and fluids. And a compartment to store things like your wallet, gloves or snub-nosed .38.”[/superquote]

The first thing to go onto the bike was a CBX550 fuel tank. The guts of it were ripped out, and it was modified to sit neatly atop of the frame. And there’s no fuel in it – as with the original design the gas tank is actually a cosmetic cover. The standard Gold Wing actually used the tank as a shroud for fuses and fluids. And a compartment to store things like your wallet, gloves or snub-nosed .38. This time around it takes a tidy digital dash instead. Underneath that the real fuel tank was slimmed down and shallowed out. At the rear the subframe was cut, shut and bent to take a new single pan and chocolate coloured seat. All extraneous bits were removed and powder coated gloss black, including the air intakes, which were fabbed up from scratch by Jacek.

Rather than the stilt-like conventional forks on the original ‘75 Gold Wing this GL has switched them out for a chunkier and shorter pair of GSXR750 USD forks. Those wavvy twin front discs and master cylinder will make a much easier job of hauling up the Honda’s 270kg weight in a respectable time. And no small amount of that heft is from the hulking flat four 999cc engine, which Cardsharper stripped and refinished in powdercoat and VHT cast iron. The engine didn’t need to come apart for this build as they’re typically over-engineered and under stressed powerplants that are likely to outlive their owners, their children and religion itself. Jacek stated when starting the build that he didn’t want it to look like other Gold Wing customs. “Most of the Honda Gold Wing modifications look very static and heavy.” And he’s right. But this one is different. It’s no small task making something that big look good. After a lot of work he’s managed to build a big ol’ interstate bomber into something much more lowdown and aggressive.