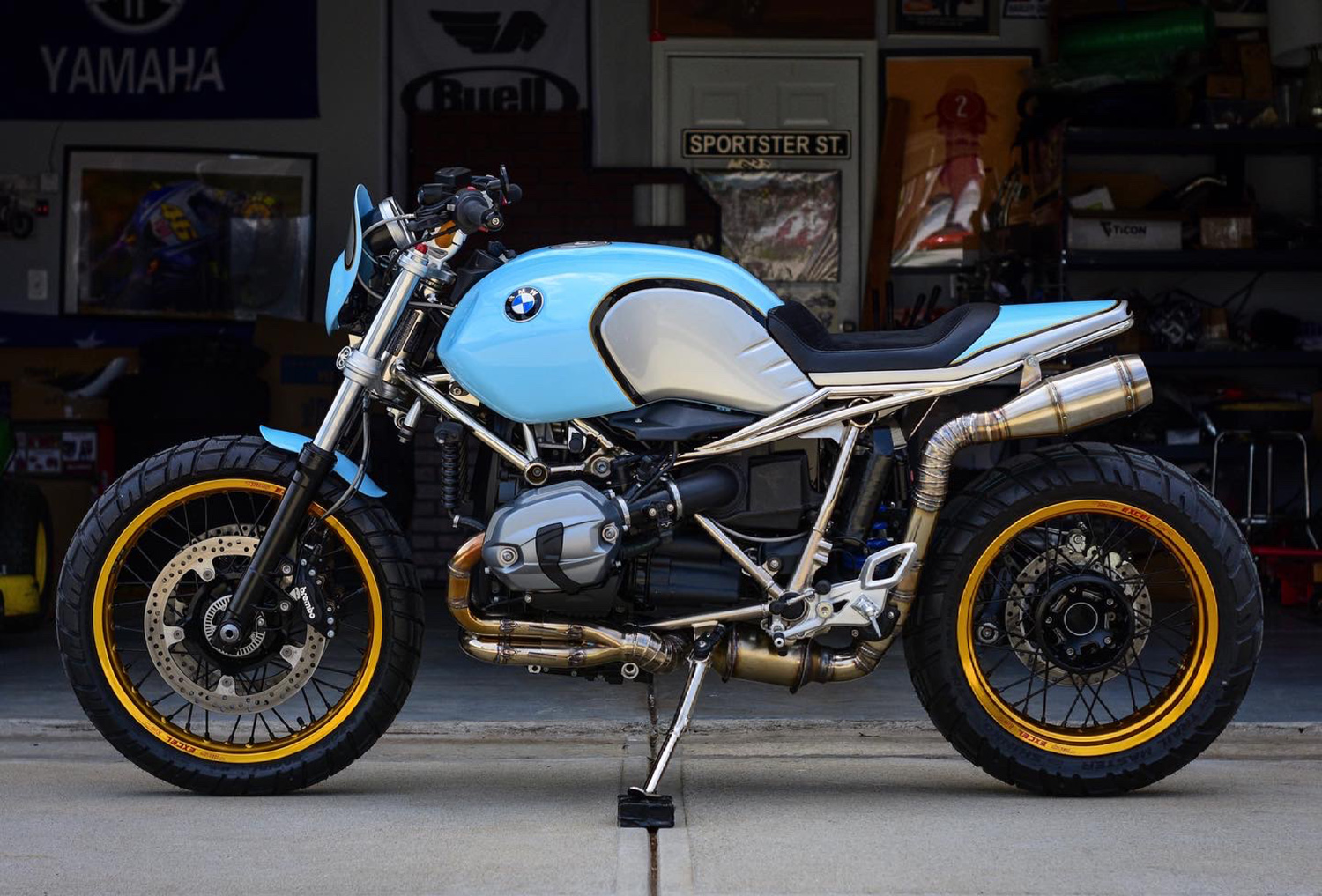 The self-help gurus of today love to talk about stepping outside of your ‘comfort zone’, but for all of us who ride motorcycles, we know that you’re never 100% in control. Stepping out can be just a twist of the throttle away or more than likely the result of poor driving by our fellow road users. So as much as Spencer Parr has been in the groove with his bike building career, his life journey, and experience on two wheels has taught him to take every opportunity with both hands. Now, the king of single-cylinder dual-sports has joined the boxer rebellion, as Parr Motorcycles turns out this beautiful BMW R nineT urban scrambler.

“I had just finished the XRR street tracker and was getting ready for the next single project when I was asked about a BMW build. The bike would be an R nineT and would be designed into more of an urban scrambler style bike. I liked everything about the project idea, but I knew I was stepping into unfamiliar territory for sure. I have never worked on a BMW before as my wheelhouse is normally single cylinder dual-sport bikes. What pushed me to take on the project, was the customer believing in me to build it and step out of my box,” Spencer explains.

So into his van he jumped and from his Indiana base, headed to a dealership in Illinois to pick up the 2017 BMW R nineT Racer for his Californian customer. The fact that his client was from the Hollywood state gave Spencer some extra hurdles, with their stricter regulations and CARB compliance for emissions. “I was given a baby blue helmet to match the paint and a photo of inspiration, then the build began.” Being the Racer model the bike was stripped of all its extras and Spencer focussed in on the frame, deciding the best solution would be to build a removable subframe that was supported by the OEM frame, and doing so without making any cuts.

Working on the new subframe and it was intended that it would merge with an all-new fuel tank, but when the client decided to keep the stock tank, the subframe was reworked to flow with the original piece. “The tail section is supported by the OEM frame, so the rider’s weight is on the OEM frame instead of the removable subframe.” On its underside are a new electronics box and an integrated guard that keeps everything dry, while remaining out of sight.

Next up in the looks department was taking care of the front end, and with the client liking the small headlight look, a cowl was hand fabricated to work with the design. The entire frame, featuring Spencer’s handy work, was sent out for a sweet coat of nickel plating that gives the bike a truly unique look. With the paint combination inspired by the supplied helmet, with black and silver highlights and a gold pinstripe to match other details on the bike; the look is simply stunning!

“The exhaust was the last piece before teardown. A 2-into-1 left side exhaust was made with a CARB compliant catalytic converter and competition Werkes muffler.” The raw stainless look the perfect addition to the nickel and baby blue, a contrast of colour and feel. Adding some gold to the party a set of Excel rims measuring 19×2.15’’ in the front and 17×4.25” in the rear were laced up to blacked out hubs, before being wrapped in aggressive Shinko e-705 rubber. To match the wheels, the clip-ons of the racer are long gone and a set of ProTaper bars in gold fitted up.

The suspension on the R nineT models is pretty damn good from the factory, as it is with all BMW’s, but that doesn’t mean a good thing can’t be improved. So factoring in the change of wheels and tyres, rider weight and the intended purpose of the bike, Wilbers suspension was used to bring it’s fellow German up to par. The front right way up forks are gutted and fitted with a cartridge kit, that includes increased adjustability, while at the rear a fully adjustable rear shock slots in for maximum control.

Wanting to keep the lines clean, the taillight is recessed in at the rear, while Rizoma front blinkers and MotoGadget blaze pin blinkers for the rear take care of the remainder of the lighting duties. “When the new black vinyl and Alcantara seat was installed, the build was complete,” Spencer smiles. Having stepped outside of his comfort zone, the young gun has once again knocked it out of the park and the challenged of the build proved half the fun. “I even had to build tools since I did not have specialty tools needed for the BMW. I’d definitely consider a similar build in the future. This is way out of my box, so I hope people like it, I sure do!”