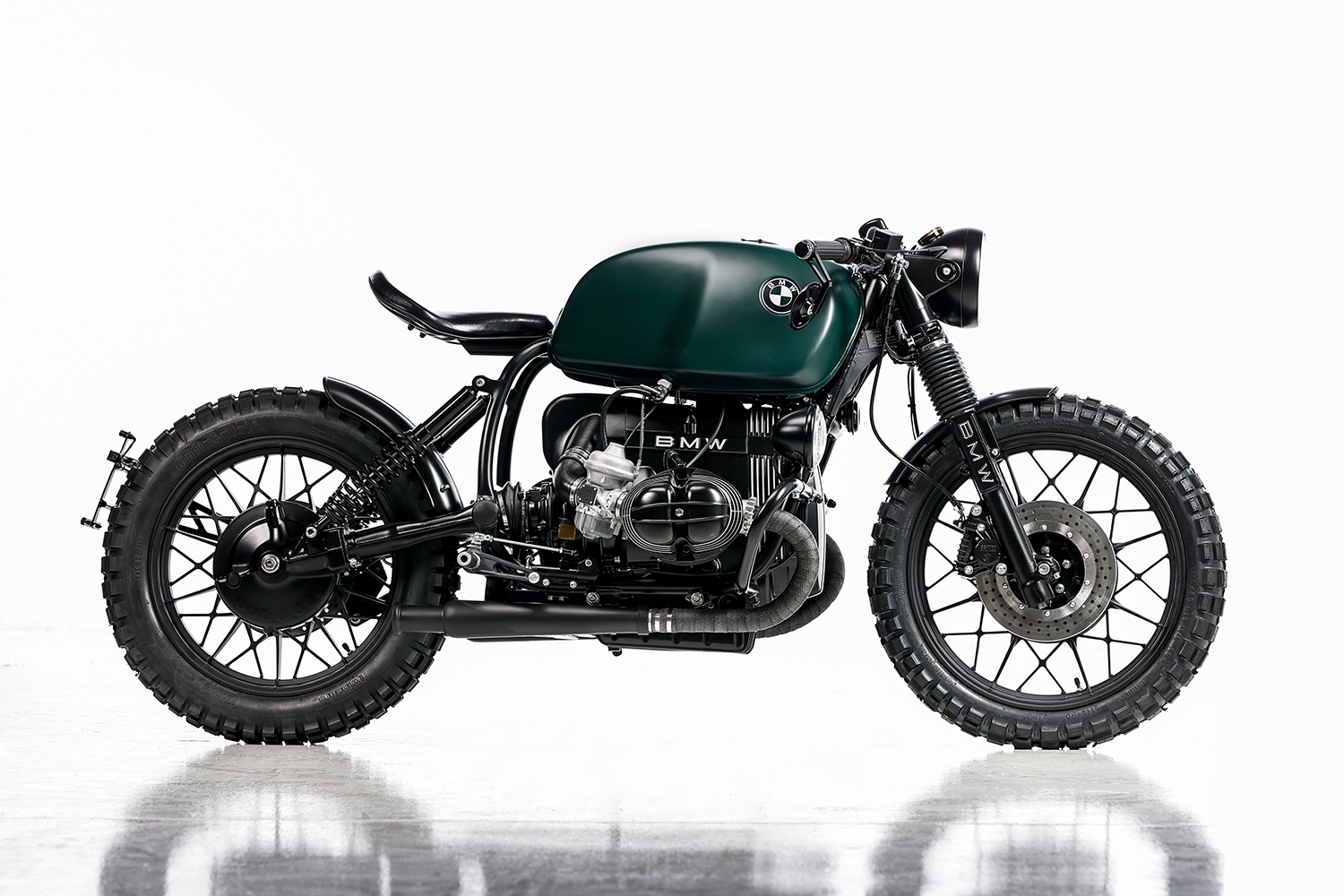 From the earliest days of their existence, Spain’s Cafe Racer Dreams, have maintained a strong internet and social media presence that has allowed everyone from their most hardened fans to the average follower a chance to watch each and every bike they build take shape. This extra effort has not only meant they’ve gone from strength to strength, but established a loyal customer base around the world, who can still feel involved in the build of their bike from thousands of miles away. For their latest creation, CRD 134, this meant their Dubai-based customer could keep track of the progress of his building as it took shape back in Madrid. To add some extra international flavour this German BMW R100RS was spec’d with a British inspired finish and is now ready to dominate the desert and dunes.

It’s hard to imagine that CRD founder Pedro García could have ever predicted the success his company would go on to have, but even his very first build was documented on the company’s blog. That particular Honda CB900 kicked off a string of big twin-cam CB builds that influenced the scene globally with their ultra-neat lines and distinctive styling. To mix things up, his ever growing number of employees took to building all manner of bikes, before becoming one of the first workshops to really start turning out the BMW R series bikes in large numbers. And it seems the formula Pedro came up with for the German workhorse has hit the spot, as this is not the first of its kind to be shipped to the Middle East.

While his team hunted for a suitable donor, Pedro was on the phone with his client, and the only real request they had was for the main colour. British Racing Green was their dream hue, not just for the look, but for its history. First used at the 1903 Gordon Bennett Cup, an international race held in Ireland, the US, Germany and France had already laid claims to red, white and blue. So, the British chose shamrock green as a tribute to Ireland, a country then still part of the Empire. That colour has gone on to be used across the very best automobiles and race cars from Aston Martin, Jaguar and Bentley and featured prominently on many of the factory scramblers of the ’60s that also inspired this build.

With a donor found, a decent shape 1979 R100RS, the team at CRD could get to work, with a rich history to keep them inspired along the way. As with all of their builds, the bike would go back to a bare frame and that of course meant ditching all of the square, heavy and ugly factory fairing. “It has been stripped bare to leave the bi-cylinder boxer engine totally exposed.” Wanting to keep that clean look meant treating every part to a makeover or refresh and the frame and swingarm have been given a coat of hard wearing black. The stock subframe has been ditched in favour of a single post and new shock mounts fabricated to suit.

To get the Beemer rolling the guys got on the phone with suspension specialist Hagon to custom order a new set of rear shocks. The British firm offers a personalised service so that not only is the length spot on to set the ride height but the shocks are built with the right internals to suit the weight of the rider and roads to be tackled.

At the front end, a stock look was desired and it’s impossible to miss the BMW branded forks with a nice set of gaiters. But inside they’ve been completely rebuilt with modern components and the factory Brembo brakes have been treated to a refresh too. The wheels are powder coated black and nothing says scrambler like a set of TKC80s.

The visuals are subtle but flawlessly executed and it all starts with taking a BMW R tank from CRD’s incredible collection and panel beating it back to perfectly straight lines and resealed seams. Out with the spray gun and it’s hit with a very traditional, flat version of British Racing Green, with simple CRD graphics at the rear of the tank. “It also perfectly matches the solo seat, handcrafted in seamless, Veg-Tan buffalo leather, giving a compact look to the rear end.” The bodywork is then finished out with a set of hand rolled fenders front and rear that are painted in frame matching black.

The boxer engine having sat patiently on the bench could now get its turn for a full rebuild and it’s beautifully finished in black, with hand-filed fins to complete the look. The stock Bing carbs provide excellent fuelling, and a re-jet and pair of K&N filters have them providing the perfect mixtures.

To complete the package, the headers are wrapped to keep heat away from the air-cooled heads and the exhaust system is completed with a pair of black cocktail shakers. To fire the big BMW to life, you hit a button on the Motogadget mini switches and Motogadget components dominate the all-new electrical system.

From their bar end indicators to the vintage look speedo, a full complement of tail lights and even the grips, the quality Motogadget gear is hard to go past. But not all of the lighting was destined to be modern, with both the headlight and spotlight, mounted on the head protectors, having a timeless vibe. The final part of the build was to get the rider seated in the position he was after and this starts with a set of low mount and inverted Renthal bars. “The Tarozzi pegs are a perfect fit for the seat and with the low handlebars, give the rider an ‘attack position’,” Pedro smiles.

The two things that have him the happiest, however; are a thrilled customer with his brilliant BMW and yet another CRD machine hitting the streets outside of Spain.