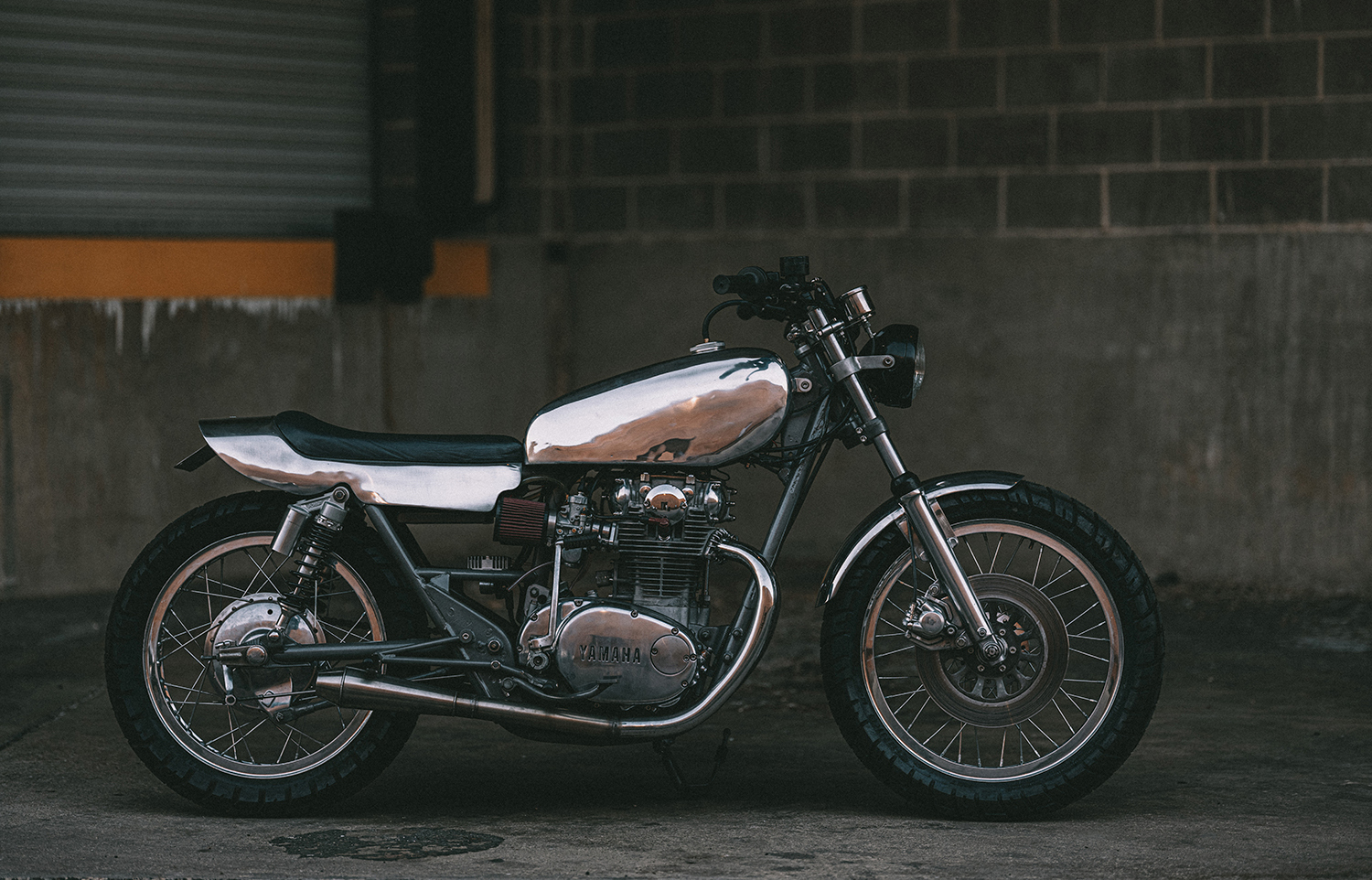 Many decades ago a bloke named Craig Rodsmith and I were both born in the same hospital and not long after they blew it up and tore it down; yep they broke the mould! It might have been called the Royal Women’s, but there is nothing regal about who we are, a boy from the burbs and the other from the bush who just love bikes. Rodsmith of course is the master craftsman who embraces the stripped-back, do it yourself, no excess or BS approach to both the way he builds his bikes and the punk rock that runs through his veins. Fast-paced and hard-edged, there is no filler in what he does, you’re either good at your craft or you’re not, and our favourite Aussie is bloody spectacular. The great punk songs are less than three minutes long and in fitting style this raw beauty of a Yamaha XS650 by Rodsmith was completed in just three weeks, working part-time!

That hospital was in the centre of Melbourne Australia, and while Rodsmith grew up in one of the city’s rough outer suburbs, he’s called Chicago, USA, home for many a decade. But you can’t take the Aussie out of the guy and you better believe we will always claim him as our own. But it was yarning with a yank that got this Yammy project underway. “This started off as a low mileage, complete and stock 1978 XS I’ve had sitting in my shop for years. A couple of months ago I was driving with my mate Chris “Sparky” Williamson, the resident mechanic and go-to guy at the Haas Museum and we started to talk about this XS I had and how we thought it would make a good ‘pit bike’ and generally a fun bike to get around town.”

The Haas Museum is at the opposite end of the country to Craig’s shop, but it’s a place that he has an incredible association with, so he’s often around the traps. A friend and brother of the late, great Bobby Haas, Craig has a number of his masterpieces on display at the museum. He and Bobby were also working on breaking a land speed record before the world lost Bobby and now his amazing partner Stacey has decided it’s time for her to learn to ride. So, the idea was for Craig to build the XS into a machine he could ride when he was down in Dallas and it could also act as the bike on which Stacey could learn to ride.

“Originally it was going to be a very basic and quick build but that soon escalated,” Craig smiles. His idea of a pit bike to hoon around on is a little different to the rest of us and it wasn’t long before he’d decided to fabricate the one-off alloy bodywork. First, the frame had to be stripped right back, cleaned up and de-tabbed to provide the perfect foundation. “I decided a dual purpose/flat tracker style was the was the go.” So, in preparation, the rear section of the subframe was chopped off and modified to suit the tailpiece that would follow. It is of course brilliantly crafted from alloy, with the single piece neatly folded over the frame to provide cover for the electrics.

That tail section also serves more roles, acting as the seat base as well as giving the vintage flat track vibe. Over the top goes a form-fitting seat, with enough foam to make it a comfortable rider and then it’s all wrapped up in black leather. Looking to turn the bike around in quick time, most people would stick with the stock tank or a bolt-on job, not Rodsmith! More alloy was banged, rolled and beaten and he was on his way to quickly crafting a hand-shaped tank. The lines flow perfectly for the style of the bike and ever the modest man, Craig downplays the result “even though my metalwork wasn’t perfect it still looked okay polished,”

“I was originally going to just clean the wheels up a little, and also leave the bodywork in the brushed finish because it was far from perfect, but I ended up taking the wheels apart, polishing the hubs and rims and re-lacing them with a set of stainless spokes, and fitting them with a set of 18” and 19” Shinko dual sport tyres.” The frame was going to be hit with some paint, but it got a different treatment too: sandblasted, scuffed up and then finished with a clear coat. Craig then knocked up a set of custom footpeg mounts and controls and completed the package with a set of Rizoma bars and risers that were kicking around his shop.

That 650 twin-cylinder engine has been cleaned up nicely and with the stock carbs having seen better days, a set of Mikuni VM34s make for an excellent new addition. Bringing things into the modern age is a Boyer electronic ignition unit and Craig fabricated a new exhaust using a combination of the stock headers with a pair of stainless Cone Engineering mufflers to finish. “Even though I ended up spending more time on it than I intended, I still managed to complete the whole thing part-time in about three weeks or so. It now resides in Dallas so I have something to ride when I’m in town, so it definitely serves a few purposes.”

If there is a better three-week build then I’m yet to see it, and I can just imagine Bobby smiling down, watching his beloved Stacey taking control of a Rodsmith Custom. If Craig’s her teacher, it won’t be long before she’s blazing the back tire up a back street with the XS bouncing off the limiter.