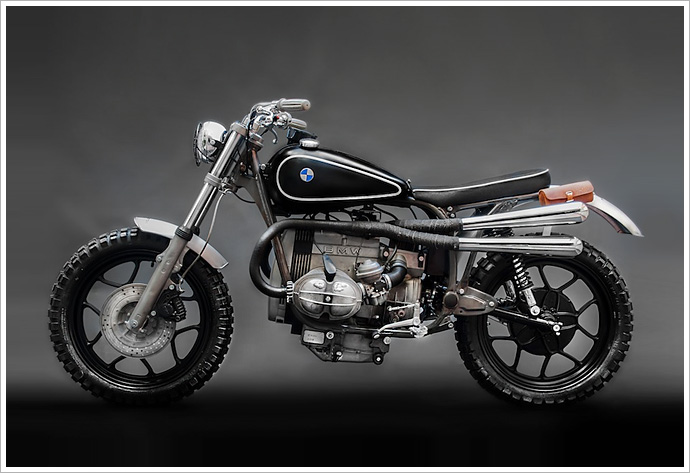 Solid. If I was going to use one word to describe the BMW R series bikes built in the 80’s, that is the word I would use. From all angles you can see it’s packing some bulk, even from the rear, with it’s horizontal heads sticking out wide. As today’s feature bike from Hook Motors shows, they also make a solid base for a scrambler type build, it’s aesthetic giving the idea that if you can’t find a way around, you could just wind on the throttle and punch your way through. Fat offroad tyres, exhaust & handlebars all give the effect of something you could take to the trails on a Sunday, and be able to ride it home afterwards with little issue. Or in the words of Hook Motors “Designed for hill or dirt roads alike, this special motorcycle feels light and manageable. This bike is meant to be ridden hard”. Amen to that. In their latest collaboration with Totti Motori, the midsize Beemer bike has been put through the wringer, with few components coming through untouched. To give the Teutonic powerplant some boost, the engine has been rebuilt, with ‘more punch than the original offering’. A scrambler style exhaust has been fashioned up, exclusively for this bike, with mucho black pipewrap used, ending in two Thruxton style silencers. The original electrical has been replaced with a full custom harness to suit the aesthetic mods, and to neaten up the look of the build. As mentioned, the bike has been touched up majorly, but the thought put into the work involved is pretty impressive. The fuel tank has been split in half, broken up into two different compartments, one for fuel, the other side containing electrical componentry and the brake hydraulic arrangement. This was done to ‘allow Hook to have a very clean motorcycle’. The seat is a Roberto Totti special, perched above the custom rear frame. Both front and rear fenders have been specially made for this build, keeping with the BMW lines, while adding to the dirtbike character of the BMW. This bike is a unique take on a classic BMW, the scrambler styling meaning extra effort like running the custom exhaust, but you have to agree that it is worth it in the end. A mix of the original steadfast German styling, with unique build aspects, make for a bike that you can admire, yet ride like Hook & Roberto Totti intend it to be ridden. This can be seen in the choice to run the original BMW rims, but wrap them in Continental Enduro rubber. A solid base for a solid build, it shows what can happen when you think outside the box.