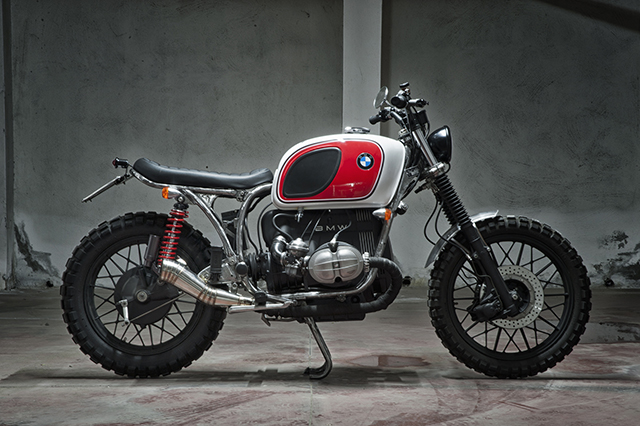 The custom bike scene is booming with a host of mainly older bikes being turned into Café Racers, Trackers, Bobbers, Scramblers and just about everything in between. But when Pierluigi Portolano, founder and designer of MotoRecyclos in Italy talks about his building philosophy he sums up in the best way I’ve heard just how to approach creating new from old. “When one thinks of a new bike the real challenge is not distorting it, but rather being able to grasp the essence and merge it with a new personality.” And that is exactly what he has done with his company’s latest creation, a BMW R80 known as the ‘Boxer Country’. It takes that trusty old German air-cooled twin and with a great deal of Italian passion and ingenuity fuses the two to create a stunning machine that looks as good as it goes. The first task to build Boxer Country into a true Scrambler that was as functional as its form suggests was to strip the bike back so that every single component could be inspected, rebuilt or replaced. With a bare frame to work with the whole thing was sanded back to raw metal, a finish that it retains for a unique look with even the sanding marks left in place, it’s straight industrial. With the long, thin wall, steel rear subframe not really befitting a Scrambler, MotoRecyclos built an entirely new item that is a bolt on/bolt off replacement. Using larger diameter steel allowed for the fabrication of a shorter, far more robust item that includes extra bracing at key structural points and at the shock mounts. With a hooped rear seat support integrated into the design the look is ultra clean while also lowering the bikes centre of gravity and moving the rider further forward for increased front end feel on a loose surface. With so many BMW R series bikes being customised these days MotoRecyclos decided a little bit of a switch up was in order and found an R70 tank that better matched the now rounder and more compact frame. Wanting to add some Italian flair to their Bavarian bruiser the colour scheme is taken from legendary racing company from Turin, Abarth. They might be known for their work with Fiat, Alfa and Lancia but in Italy the colours represent a classic era in Italian racing history. The white might be the main colour but as with all Abarth creations there is a generous amount of classic Italian red broken up by the black pinstripes. The BMW badges and knee guards are retained but the top of the tank features a new chrome cap, twin racing stripes and the MotoRecyclos logo. To offset the brilliant paint work on the tank the seat is kept simple Scrambler with smooth leather sides and a hard wearing, tightly rolled and tucked top with just the slightest kick up for support in the rear. To give you an insight into the thinking behind the build Pierluigi told us “We could tell the story of Boxer Country as the tale of a BMW R80 that got bored walking many kilometres on paved roads one day and decided to get more practical, light clothes and take a walk in the country roads.” So to make sure the BMW not only could walk along those rough country roads but tear them up some special attention was paid to the suspension. The rear in particular loses it’s factory pogosticks and now wears a pair of high performance Bitubo shocks, with remote nitrogen filled reservoirs and full dampening and rebound adjustment. While the factory front end is the police issue hydraulic forks with dampening holes reduced from four to two for a firmer, more stable ride. Rubber is vitally important for both the looks and the performance of a truly versatile Scrambler and MotoRecyclos picked one of the best products on the market in Continental’s Twinduro TKC80 Dual Sport Tyres. The heart of this Italian Scrambler is of course the much loved 797cc horizontally opposed boxer twin that has been rebuilt so well it looks like it’s just rolled off the production line. A standard pair of Bing carbs draw their air through an as new factory airbox that makes a whole lot of sense on a bike that will see many a dirt road. A host of new seals, gaskets, bolts and leads means the rider can take to the country roads with the sort of reliability that sees the air-cooled BMWs clock up huge miles without ever breaking down. To give the bike some bark the standard pipes have been heat wrapped before finishing out with their own GP mufflers with removable baffles. A new battery is securely held in place in it’s own metal box behind the engine while the rest of the electronics are neatly tucked away in a fabricated case under the seat. The new risers and bars are the perfect fit for the lines of the BMW and its scrambling intentions, while the addition of a Tomaselli quick action throttle gets you to redline just that little bit faster. The less than attractive BMW instruments have been ditched for a simple Motogadget speedo that provides more than adequate information. With the front end further cleaned up by simplifying the loom and using two small switch blocks with just two on/off buttons per side. The final addition to the bars is the new levers and master cylinder from another Italian, Accossato Racing, with improved brake lines giving better feel to the standard twin disc BMW front end. Protecting all these goodies from the flying mud is an alloy bobbed fender in a raw metal finish to match the frame. There is no rear fender but the numberplate catches the rooster tails letting you know that this is absolutely a bike that is ridden and not just parked up at the local cafe. But for Pierluigi a good motorcycle should be capable of both “A bike should also be used, catch the eye when it stops in front of a trendy bar but knowing how to move when you use it.” A feat he has truly achieved, this is not just another BMW R series Scrambler in looks only but a purpose built motorcycle that is capable of living up to all its promises and adds more than a little Italian beauty to the king of German functionality.