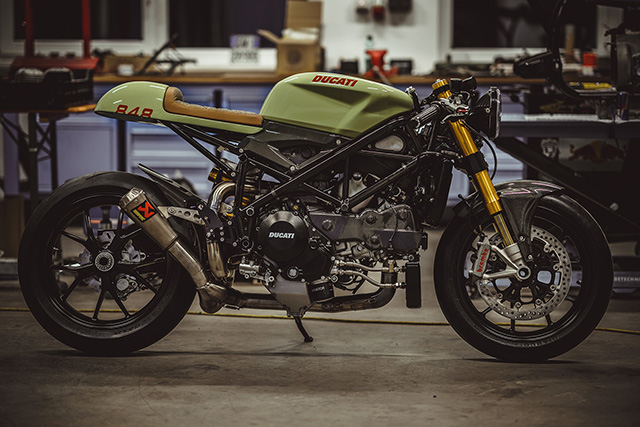 On the salesroom floor of a motorcycle dealership, no sector of the market sees technology evolve as quickly as in the Sportsbike sector. The constant need of race teams for homologated bikes to have the latest and greatest sees an update almost every year. This, in turn, leads to serious depreciation in the class and, before you know it, even modern Ducati’s make financial sense for a makeover. But Austria’s NCT Motorcycles has done more than just that, putting their full custom stamp on a Ducati 848 Evo to really ramp up the racer element in this cafe machine. 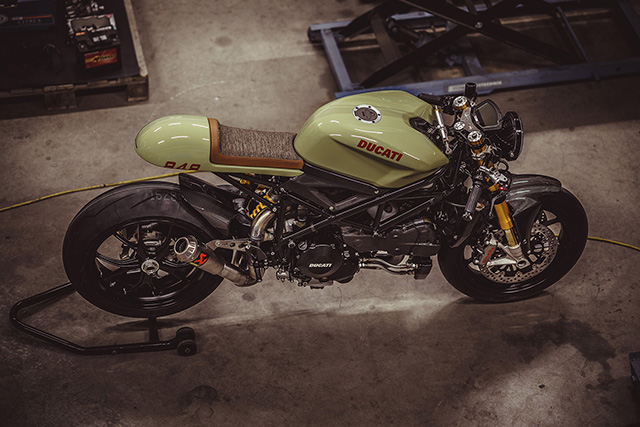 Situated in the Eastern Alps, come summertime, the roads around the NCT workshop transform into the perfect place for a road bike. So it comes as no surprise that every custom David Widmann and his team build, no matter how crazy the visuals, is a true rider at heart. Having previously worked their magic on a ’90s Ducati 750SS, the 848 was the opportunity to step another decade ahead in the companies evolution while still applying their signature touch. 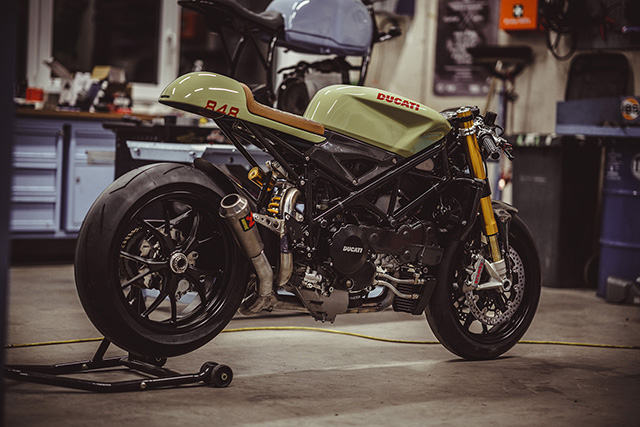 The 848 may have only seen limited success in racing, but outside of the engine the bike shares a huge range of parts with the dominant 1098 WSBK winning machine. This becomes evident as you strip it down and the crew at NCT wanted the bike back to a bare frame before they began their build. The first challenge they saw was the size of the subframe and an entirely new item was fabricated to suit the cafe look they were going for. 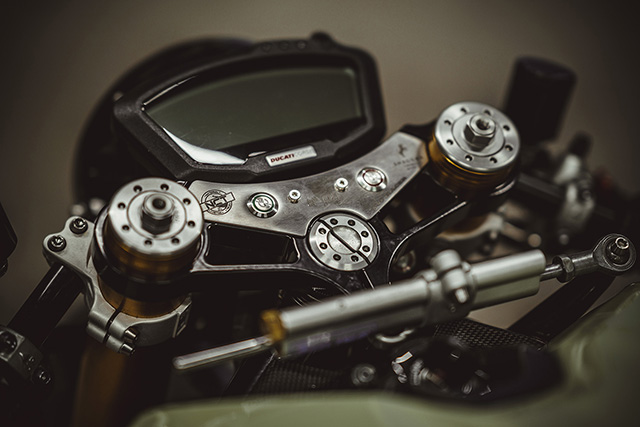 With the new unit bolted into place, the entire frame was powder coated a rich gloss black to allow the minimal bodywork to stand out. With the fairings thrown aside the factory fuel tank remains as the sole stock piece. But to compliment it, an all-new tail section was fabricated from aluminium in a very traditional cafe racer style, albeit with a very modern touch — the frenching in of an LED light strip. To complete the look, carbon fibre is used on the side covers, rear hugger and front guard, reducing weight on the already feather-light machine. 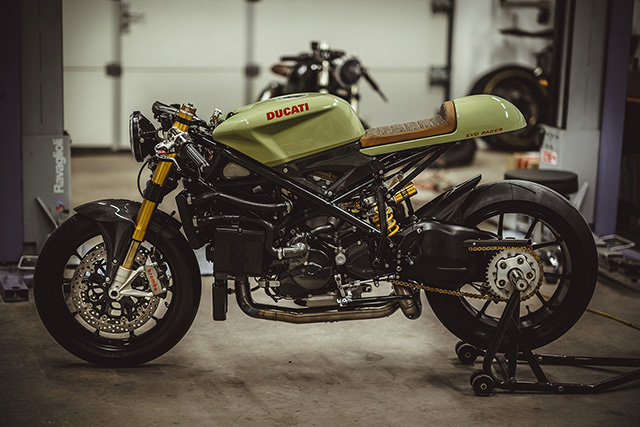 “We think the colour is outstanding and fits really well with the overall look of this bullet,” David smiles. The rich Olive Green is unlike any hue you’d normally associate with a Ducati, with Red, Red and Red the usual choice for the marque. But it helps give the modern bike a classic touch and the seat works perfectly with the scheme; the vintage leather and tweed covered combination sitting on a foam-padded aluminium base. The headlight finishes out the visual aspect of the build with a round LED another brilliant merger of two eras. 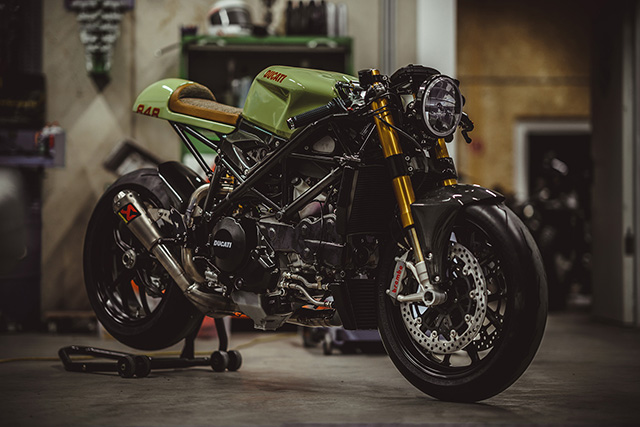 Now the crew could focus on the performance and straight from the box, the 848 Evo comes with plenty of special fruit. Although running an Öhlins shock from the factory, the crew went for a brand new shock from the big O with an extra decade of technology pack into the unit. While upfront the original Showa 43mm forks have been fully rebuilt and treated to a new CNC machined upper triple clamp. Arrive too hot into an alpine turn and you’ll relax knowing that the brakes are mono-block Brembo’s clamping 320mm discs and a hairy moment is avoided. 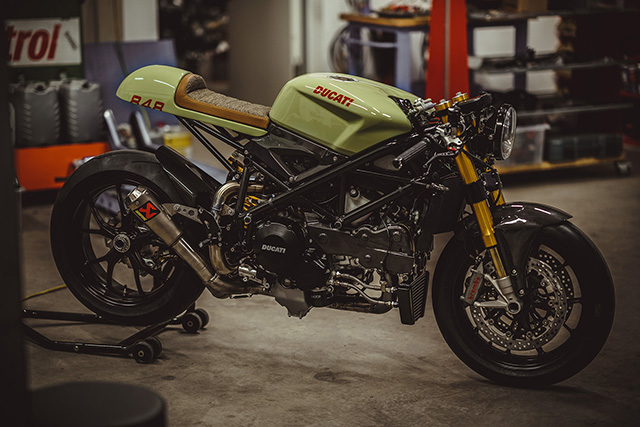 With the chassis well and truly sorted the NCT crew turned their attention to the most advanced incarnation of the 848 engine that produces 140hp from the factory. Not content with that stonking figure for a middleweight, a full exhaust system has been fabricated that ends with a flame throwing Akrapovič end can. A K&N air filter feeds the Evo spec Marelli throttle bodies with large elliptical bores for improved throttle response and the ECU has been remapped to suit. 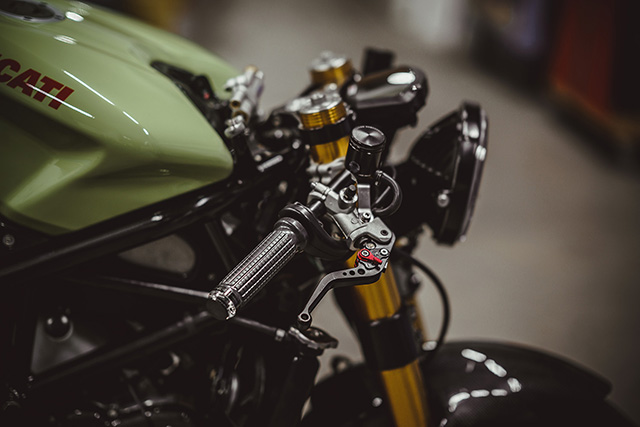 Helping to put that power to the ground the lightweight alloy rims have been powder coated black to match the frame before being wrapped up in sticky Pirelli Supercorsa SC2s. The final part of the build was all about making it street legal and a re-wire with Motogadget components gets the job done and helps to save significant weight. While the factory dash has been retained, a new mount lays it nearly flat for a clean look but all the information you could desire. NCT churns out bikes like a production line, but as the Evo Racer proves they do it to the highest of standards and ensure their clients ride away fast as hell and looking fly! 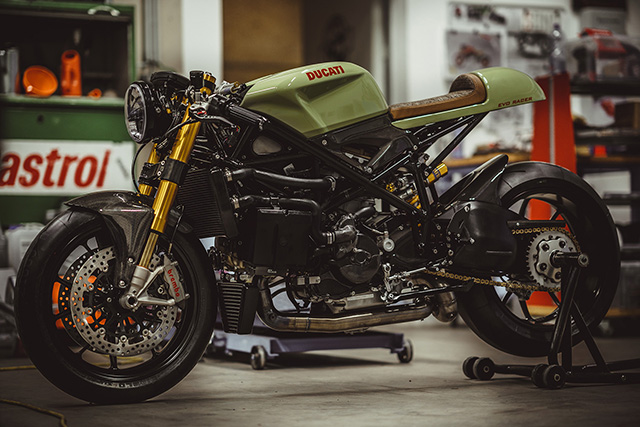 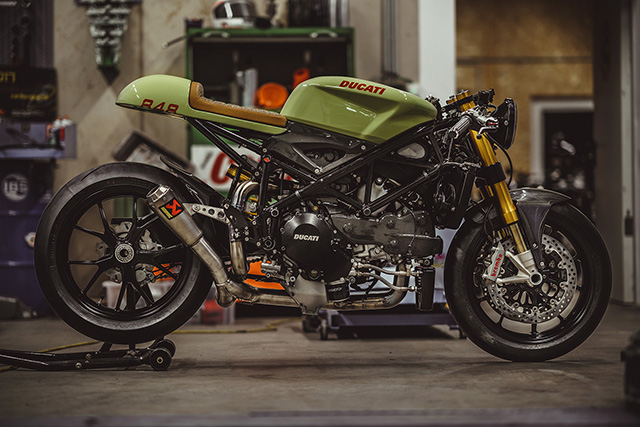 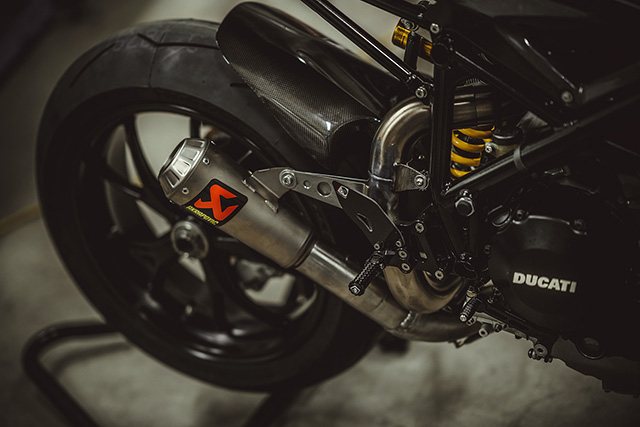 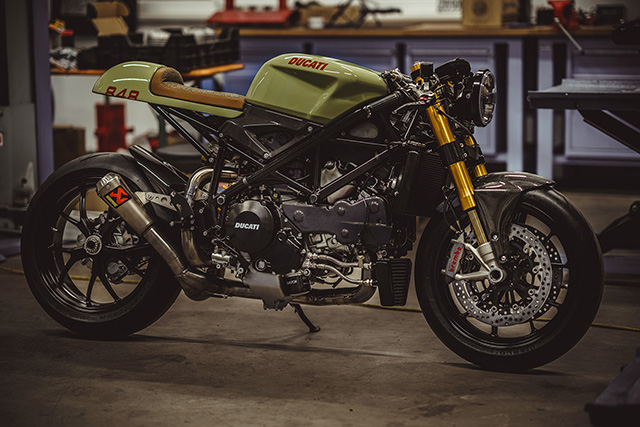