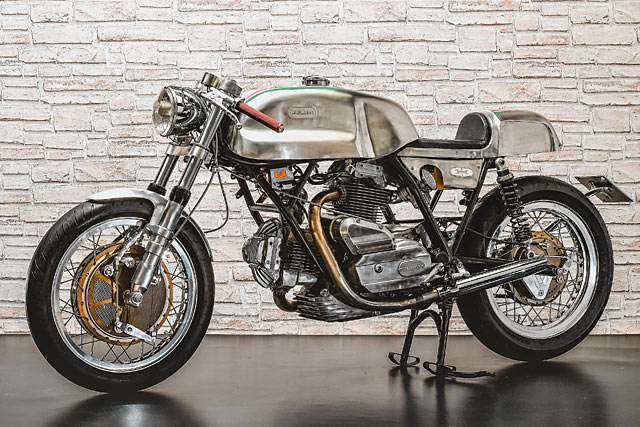 They’re one of the leading motorcycle builders in Italy, restoring classic bikes to their former glory and creating some of the best customs in the land. Yet for all the success that Rome’s Emporio Elaborazioni Meccaniche has had, can you believe they’ve never built a Ducati as part of their “special” line up? Well, Dopz, Schizzo and the crew thought it was about time when the right customer came calling and to pop their cherry they knew they had to go hard! Inspired by the classic racing machines of the ’70s, it’s a 1978 Ducati Darmah 900 cafe racer sensation they call Crono. Despite the cafe’s now automotive museum quality looks and brilliant performance, the donor bike that the customer rolled into the central Rome workshop was anything but. Wherever it was wheeled it left a trail of oil and the smell of weeping fuel. But given the popular nature of the classic 2 valve L-Twin Desmo engine the flaws and fixes are well-known and the motor was quickly up on the bench. Sharing a great deal in common with the 900SS, the engine would be the first part of the bike that would be shifted in the Super Sport direction away from the touring orientated donor of the Darmah. The engine was torn down to the very last bolt as the first step of the build and rebuilt to ensure the oil would remain on the inside no matter the rpm. The gorgeous workings of the upper bevel have been exposed, while the front cylinder that is normally far less pretty thanks to the tacho drive has been completely cleaned up. New carbs replace the small versions fitted to the Darmah from the factory and make one hell of a roar through the short stacks. While individual mandrel bent stainless pipes take care of the exhaust gas and finished out in polished mufflers elicit an incredible sound. With the engine sitting pretty it was the classic Ducati frame that was the next piece to receive attention and the wheelbase is shortened to match the faster steering SS. There is also plenty of weight to be removed and any excess metal has been cut off and thrown away with no need for the extra long subframe to support the old two up seat. The classic race tail takes its place, perfectly fabricated from incredibly thin aluminium to keep the weight as low as possible. The frenched in tail light maintains the minimal look and the seat provides just enough padding. The cafe’s tank was an easy choice, the customer desired it, the look called for it and EEM’s first bike to make an impact on the scene featured one too. “The tank is the same as our pretty famous 2012, XJR Mastino” smiles Dopz, recalling the bike featured years ago now on Pipeburn. The all alloy Ducati Imola item is a thing to behold, the unpainted metal lines just begging for you to run your hands over each curve. The Italian’s sure know how to do sexy and despite the bare finish their national pride sees the tricolor run across the top. But rarely do the supporting components of a motorcycle also look so good; on Crono they not only add to vastly improved functionality, they’re a feast for the eyes.

With the help of a set of stunning machined triple clamps a set of Ceriani front forks have been adapted to fit. At the rear new Wilburs progressive rate coil over shocks provide a radical improvement over stock without taking away at all from the classic look. But if the suspension has you impressed its the brakes that draw the eye and are simply a sight to behold! Used by many a racer of old the Fontana four leading shoe front setup is simply beautiful and a set this good is worth a small fortune. They’re heavy old things but despite their age work remarkably well and to ensure they’re mated to another old favourite, stainless spokes lace them to Borrani rims front and rear. An Avon tyre at the front and Bridgestone Battlax rear make for the perfect compromise of excellent grip with a not too modern tread pattern. The rear hub and brake setup is just as impressive but as the boys explain providing activation was the biggest obstacle. “One of the most interesting built parts is the way the rear drum brake works. We passed from a fluid brake to an old cycle-like cable brake. Dopz produced different solutions but was not good enough for the Emporio stress test. The fourth solution (the simpler one) worked great! A simple small lathed pulley that brings the cable from the right foot to brake on the left part of the bike.”

That foot presses down on a new pedal setup that is part of the rear sets that stay true to the old factory racer appeal. For hand controls its more exotics parts from yesteryear with Menani race bars attached to the forks and equipped with a Tommaselli throttle. The built-in lever supports just add to the eye candy and the exposed sheathed cables once again are a brilliant example of the way EEM can take a small functional component and make it look, well, Bellissimo! The yellow battery is a tip of the cap to the flamboyant colours used in the ’70s but like much of the new wiring loom is hidden by the hand-made side covers. Up on the custom clamps is a brilliantly executed lock and start button combo with a single switch to illuminate the headlamp. “Did you notice the wrench in the front drum brakes and also the cafe’s headlight is from a Citroen 2CV?” winks Dopz. Knowing once again the Emporio Elaborazioni Meccaniche team has hit it out of the ball park with a truly incredible build and still managed to have their own bit of fun along the way. All done in the centre of one of the world’s truly great cities, our Roman rebels are now Ducatisti for life.