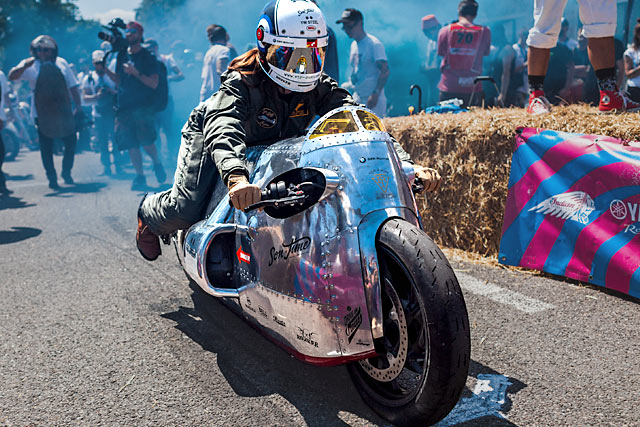 First there was Those Magnificent Men In Their Flying Machines. Then came the Merry Pranksters. After that there was the Wacky Racers, the Cannonball Run and Burning Man. So just when you think that the whole creativity/machines/party thing has been milked dry, along comes the inimitable Sultans of Sprint. Its origins are French. Considering their invention of the Etch-a-Sketch, drinking champagne while hot air ballooning and nudity in cinema, who else could it have been? So like an impossible circus full to the brim with high octane, neon colours and crazy smiles, they recently descended on Belgium’s famous Circuit de Spa-Francorchamps for their own special brand of folie. Here’s what went down.

Hosted alongside the ‘Bikers’ Classics’ retro racing event at the legendary racetrack, the second round of the Sultans of Sprint Challenge for 2018 was a hot blast in more ways than one. With extreme temps, the weather had exactly nothing in common with those of last year; the mercury reached almost 40°C in the shade. So with more nitrous than a Las Vegas dentists’ convention and more speed than a long distance truck driver, things kicked off. While the speed and their fellow competitors are usually a S.O.S. rider’s biggest challenge, the silly high temperatures at Spa were a new test to face for all of the Sultans of Sprint racers, riders & teams. Who said Belgique can’t do a tropical summer? And with a shorter track than usual, the whole shebang was more than a little bit different. Power was not the name of the game this time. More than ever, getting off the line and all the traction challenges that entails were key for success on the Belgian track. The scorchhing temperatures made it bloody difficult to find the proper grip point to take off without taking off and both riders and bikes were pushed to their absolute limits and/or melting points.

In the new-for-2018 ‘Factory Class,’ the Triumph Germany x Mellow Motorcycles team clinched a shock victory in their second ever round. Former Moto2 racer Arne Tode made the best use of the blown Triumph Thruxton R ‘Phantom Blaze’ and his wealth of skills allowed him to quickly get to grips with the grip, not to mention the epic surge of the supercharged engine onboard this amazing sprint racing machine.

Second place was nabbed by Rolf Reick on his #19 BMW R nineT x Krautmotors ‘Little Go Beep’, which – as per the bike’s ‘new look for every race’ concept – was sporting some brand new copper bodywork. We’re not sure if this made his bike faster but clearly Rolf was in really good shape, finishing just ahead of the insane Yamaha Motors XSR700 ‘Sakura’ built by Workhorse Speed Shop and ridden by Andy Geeroms. An honourable 4th place was taken by Amelie Mooseder on the crazy cool BMW R1200R x VTR Customs ‘Spitfire’. She did her very best, but her rolling warbird probably needed more space to stretch its legs than other bikes on the grid. Indian Motorcycle couldn’t follow up on their Monza success due to an incident the weekend before with their FTR 1200 Custom; the prototype was being urgently fixed and has hopefully made an appearance at this weekend’s Sultans Glemseck round. Currently, Triumph Germany and Mellow Motorcycles leads the 2018 Factory Class standings by 40 points with this victory in Belgium – but who knows what may unfold with Indian in Leonberg? As for the now-classic Freak Class, 1st place was taken by Radical Guzzi Team and Simon on his ‘NOSferatu.’ For their third season in a row, the Radical Guzzi team finally got a very well deserved first place with Herr Bronold riding the Italian stallion to a big win. While also struggling to find the proper traction in the heat for their super powerful Guzzi nitrous-injected engine, the German team finally made it on top of the podium: their determination, commitment and hard work seems to have finally paid off. Second place was secured by Daniele Ghiselli on the #16 SouthGarage Squadra Veloce ‘Superhero’ Ducati just ahead of Kraftstoffschmiede’s Philip Ludwig on his nitrous #46 BMW 4-valve ‘Hercules’. In 4th place was show organiser Laurence on her #17 Lucky Cat Garage BMW ’Bombinette,’ who would have taken out the deft touch throttle control award had one been on offer. “Traction wasn’t the only issue that the heat spawned. Many teams suffered from nitrous and clutch issues, too”

But traction wasn’t the only issue that the heat spawned. Many teams suffered from nitrous and clutch issues, too; condolences to FCR Original and their Triumph ‘Crazy Bonnie’. Better luck next time, kids. And in case you were wondering, the #46 Kraftstoffschmiede Team is currently leading the 2018 standings with 167 points, ahead of the Radical Guzzi #66 team in 2nd place and the Schlachtwerk #25 team in 3rd.

Fans of the series will know that the race ingeniously (or maybe dangerously) offers “Party Monster Bonus” points; in Spa this revealed itself to be a race combining a skate longboard and a VéloSoleX – a.k.a. an old French motorised bicycle. Oh, and the cherry on top of the hilarity pie? The bike had to be ridden by a team mascot in full costume while pulling a skating sprint rider. What’s the French version of that Benny Hill ‘Yakety Sax’ song?

Not so easy for skating beginners at normal European temps, but clearly it was verging on the insane once you add 40˚C and some nicely chilled ales. All participating teams got 10 bonus points and Sultans organiser Seb went out of his way to congratulate all the riders and mascots for being silly enough to take part. What legends. So as the sun went down and things cooled off, the legendary Sultans of Sprint after-race parties warmed up. It was at its best on Saturday night in the Bikers’ Classics Village; not only did the teams put on a great show on the dragstrip but they also showed us once again just how high a benchmark they can set when it comes to winning at parties, too. Godspeed for Glemseck!