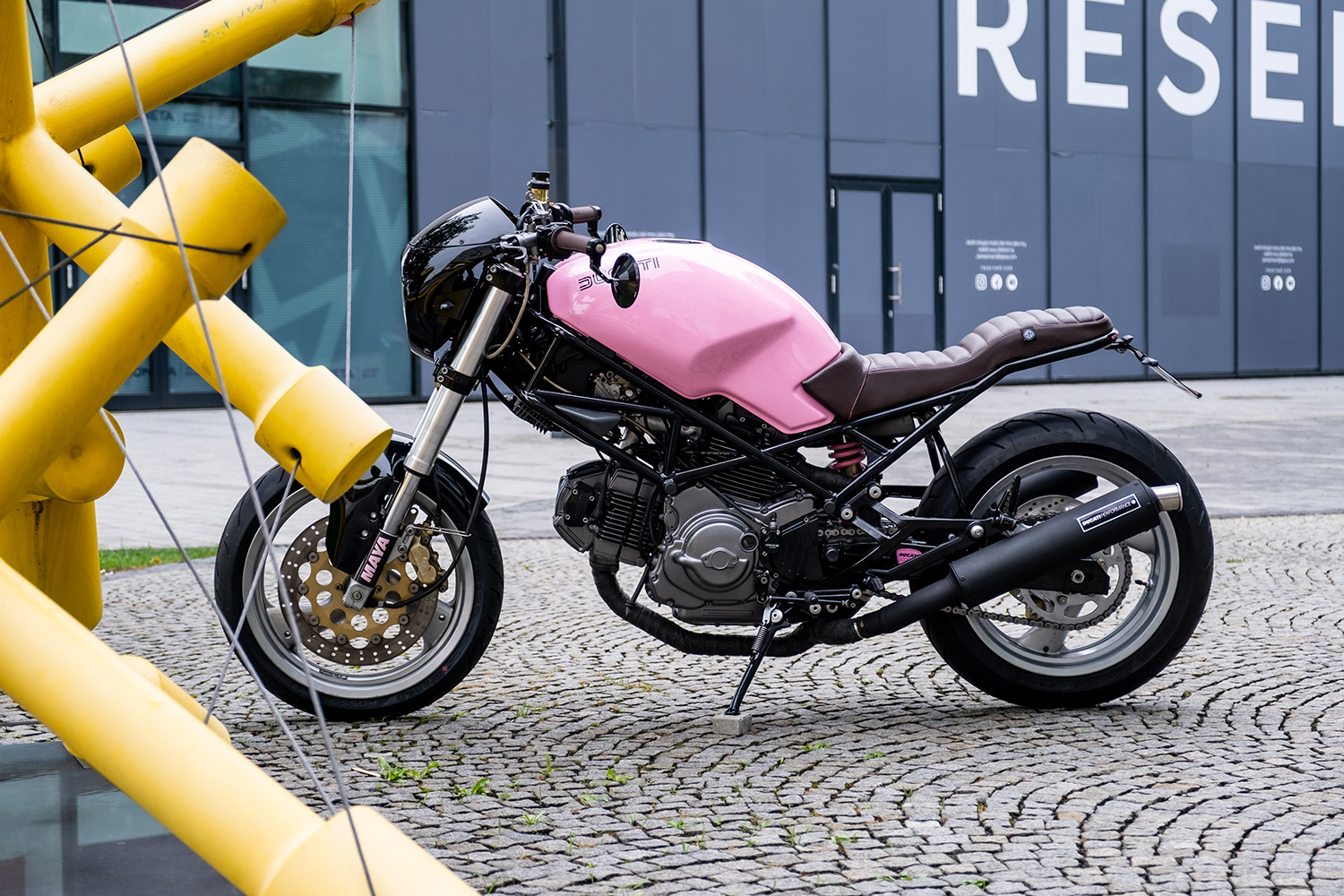 If you’ve ever bought a bike or car off the internet, sight unseen, then you know that the saying ‘a picture is worth a thousand words’ is both wrong and often cruel. What the picture often doesn’t show is the poorly covered up crash damage, the milky oil from a blown head gasket or any number of other horrors you may be lumped with. So, when it comes to having a custom motorcycle built for you, one of the best things the builder can do is ensure you ride off on a machine that is well and truly sorted. Which is exactly what Marcel Galuszka of Blackout Custom Design ensured for his latest client who wanted her machine to have a feminine touch. First, he built a solid base and then crafted this pretty in pink Ducati Monster to deliver a custom that met her budget and fulfilled her dreams.

When a striking woman of African descent showed up at BCD workshop in the Czech Republic, who was Marcel to say no when she asked to talk about her motorcycle. “She asked me if we could have a little chat about the possibility of converting it into an interesting and visible cafe racer. It’s her second bike, so she wanted to modify it to express her personality, something simple, visible, and budget-friendly,” Marcel tells us. He could see the bike outside, a 2000 Ducati Monster 600, and already he could see that the fluro yellow framed machine had been modified in the past, and probably not well.

For the most part, Maya would allow Marcel to decide what the bike needed and how best to go about the build, a client who trusts the builder as the expert is a wonderful thing. But she had two requests, the first was easy to accommodate, the bike had to be capable of carrying a passenger. The second was a little more jolting, the paint had to be one colour, and one colour only, an eye-popping pink. So with the bike in the shop and the details settled, the bike was stripped down and Marcel wasn’t too far into the process to see that things were worse than he first suspected.

To make the bike easier for Maya to ride, the subframe had previously been chopped, to lower the seat height and let her feet sit flat on the ground. But the work performed was not only less than stellar, but it was also downright dangerous and the welds looked like they were ready to crumble. So there was only one thing for it, cut the subframe off and go over the entire frame and make sure it was structurally sound, before crafting a replacement structure. The new subframe offers a neat hoop, perfect up kick for the passenger’s comfort, and then the whole chassis is finished in a gloss black.

“Surprisingly, everything else went almost very easily, except for a few small things, which are always revealed sooner or later with every rebuild.” Next on the fabrication list was to box in the underside of the seat and provide a neat place to store some of the electrics and create an inner fender. The bike was starting to take on a sleek and clean appearance, so the next task was for Marcel to sort out the instruments and the idiot light section of the stock unit is truly horrific. His solution is genius, use just the stylish white-faced dial, and then take advantage of tiny modern LEDs for the remainder.

Now simplified, it all fits very neatly behind the small front cowl, which hosts a tinted screen and surrounds the Monster’s round headlight. The stock front fender was sanded back and cleaned up and that distinctive tank was next to be smoothed out and fitted with a race-style filler cap.

Now came the paint, and the gloss black of the smaller components lets the Vespa Fashion Pink on the tank truly pop. Maya gets her own graphics in pink on the lower fork legs and when the bike was all back together Marcel couldn’t let the yellow rear spring remain, so pulled it all to bits again and hit it with the pink too.

The seat was next on the list, and with a custom base made it could first be padded with shaped foam and then get covered up in classic brown leather. What is not at all traditional is the stitch colour, pink of course, with matching brown grips to complete the look.

The stock handlebars are slightly rolled back to allow an easy reach, powder-coated black to match the frame and then the refurbished switch gear is complemented by Highsider mirrors. The new levers allow Maya to operate the rebuilt brakes with a perfect feel, and to give the clutch side the same quality, a radial master and Oberon performance slave cylinder finish the job.

What Marcel does on this build so well, is ensure that this bike is a joy to ride, and so rather than waste time and money trying to extract bulk power from the 600cc engine. He gave the motor a major service and check-over, before painting up the side covers and cleaning the cases back to an as new finish.

The exhaust is based on the stock system, with neat new mounts and blacked-out Ducati Performance mufflers, that receive a touch of pink on the decals. A new set of tyres, and then it was time to throw on a new license plate on the custom mount with Koso LED lighting.

It’s the most simple build to roll out of Blackout Custom Design, but it’s exactly what Maya wanted; clean, reliable, and perfect in pink.