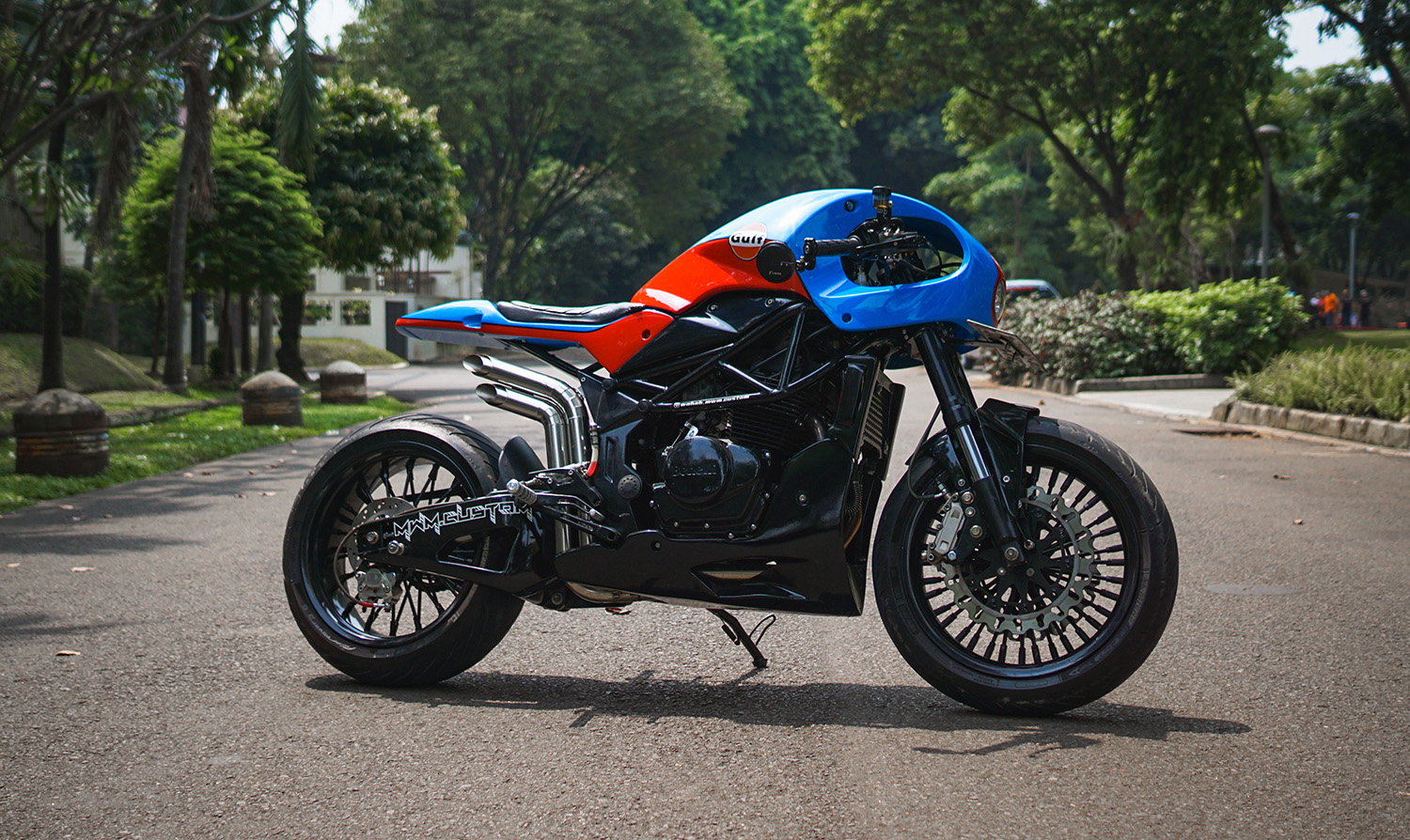 If there is a quote that truly sums up what custom motorcycles really are all about, it comes from a little-known biker named Albert Einstein. “Logic will get you from A to B, imagination will take you everywhere.” Ok, so Albert preferred pedal power, but he wasn’t wrong and if anywhere takes basic bikes and lets their imagination run wild, it’s in Indonesia. The nation of 17,000 islands really hit the scene upside the head five years ago, and its builders continue to push the envelope in every single way. Take this bike here, starting life as a commuter cruiser Benelli Patagonian 250, the team at MWM Custom in West Jakarta took their inspiration from a small amphibian and have produced a wild little sportbike called ‘Si Cebong’.

That name means tadpole or little frog in Indonesian, and if you look at the bike you soon see the resemblance and how that inspiration was spawned. But we’ll get back to the motorcycle in a minute, first, it’s time to learn a little about MWM Custom. Founded in 2016, they quickly went from a parts supply and fit company, to taking on more and more daring projects. The guys are true bikers and will ride anything that has two-wheels, but what gives the place such charm is the sheer variety and organised chaos on the place.

Parked next to a little old scooter will be a custom Harley Sportster, and while one member sits using a laptop to design a new part, another is making said part on the floor, with a grinder at full noise, and wearing shorts and thongs. Occupational health and safety eat your heart out. But it is in such an environment that creativity so often flourishes, and with some bits and pieces of Benelli laying around, an idea of how to craft their own sportsbike was quickly formed. Very early on the bodyworks styling had been conceived, but first they had to build a base to place it on.

The engine is from a Benelli Patagonian 250, which is a very cheap, cruiser knock off, that has helped the Italian-named, Chinese-owned firm to gain a foothold in emerging markets. The liquid-cooled engines that power them will never win many drag races, but they are bulletproof and lightweight, perfect for what the guys had in mind. To give that engine a home, amongst the metal laying around at the shop was part of a frame from another Benelli, a Leoncino and the two were merged to become one.

But the frame has come in for a host of modifications, both to fit the distinctive bodywork and to also prepare it for what was next. And what the guys really wanted to do with the chassis was show their fab skills and to do so, they’d transplant the entire rear end of a Yamaha R1 onto the little Italian. This meant some serious welding and strengthening had to be done around the pivot point before the modified swingarm could slot in. To keep the sportsbike theme going, the R1 shock also finds a home at the rear of the bike and mates to an all-new upper mount.

The upside-down forks are taken from the workshops parts supply and help to give that sportsbike feel, only further enhanced with the twin disc setup. But it’s the wheels that really had me guessing, I couldn’t place which make or model they could possibly have been taken from. But as the guys told us, these are a complete MWM handmade set, and looking through their Instagram account you can see the labour-intensive process of bringing them to life. The big spokes support a 120-section tyre at the front and an absolutely massive 190-section for the rear; that little engine has its work cut out.

Now with the base of the bike complete, the bodywork could be made in two parts, the rear tail section, and the front tadpole fuel tank and fairing. A new subframe was required for each, and the aggressive tail floats out over that big rear tyre, with recesses made for the LED tail lights and indicators. The front section is clearly much more complex, requiring 5 months from design to completion, with everything from the fuel tank and its EFI hardware, right through to steering clearance and so much more having to be factored in.

A pop-up filler cap and frenched-in digital speedo just help to add to the drama of it all and the tiny headlight helps to accentuate the size of the fibreglass piece. A lower fairing, hugger, and front guard have been added and finished in black, while the most radical elements of the body are painted up in the full Gulf Racing colour scheme. The engine gets in on the madness with a one-off creation, the guys let the header pipe finish under the fairing and then emerge out of the rear end via too wild, slash cut, exhaust tips that no doubt scream when the throttle is pinned.

The bike has already been a hit at shows and gets plenty of attention on the street, helping to sell the MWM Customs name and proving that the guys can build absolutely anything that their customers dream up.