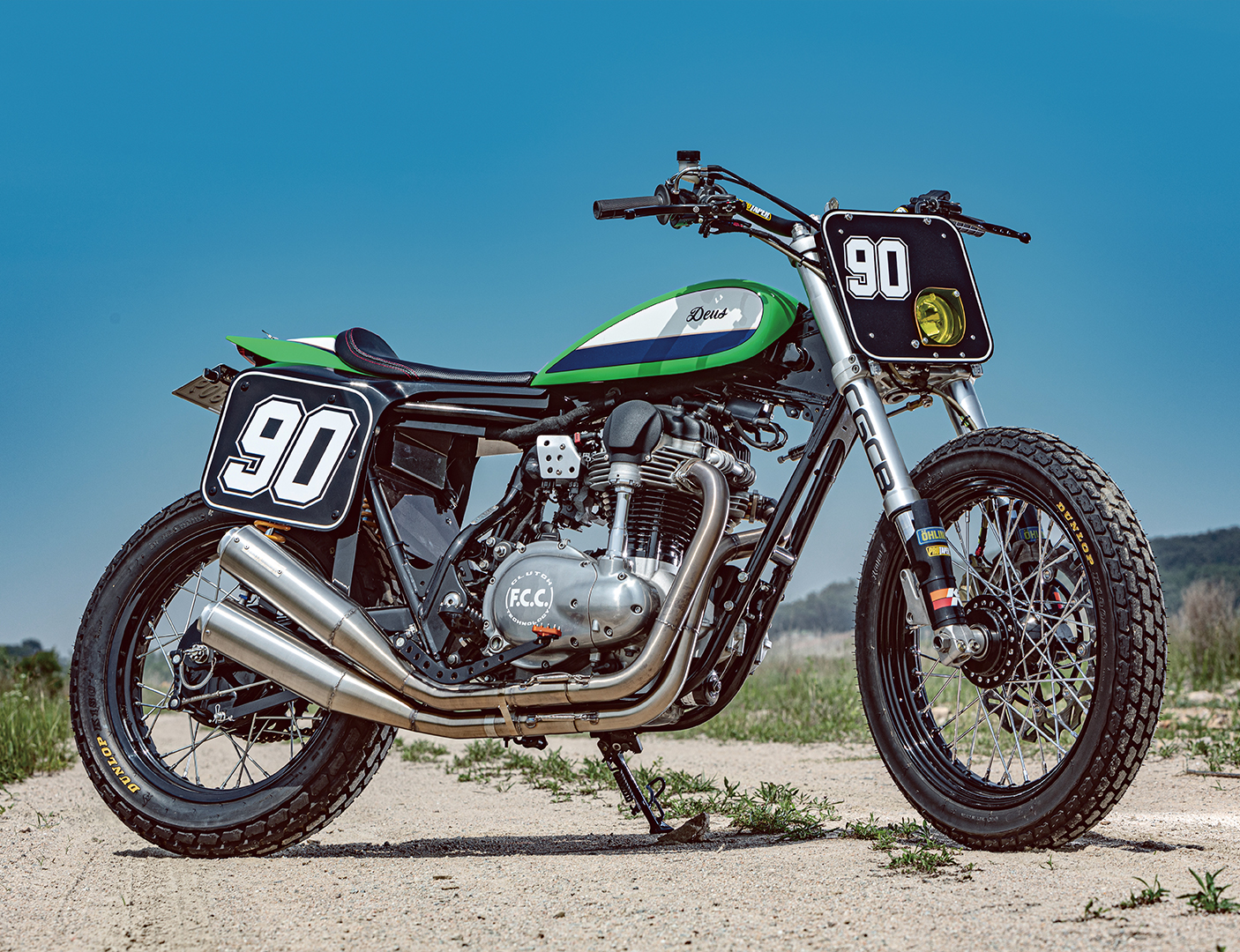 While the over-the-top AMD Championship-style builds undeniably have their place within the custom motorcycle space, it requires a different set of skills to aesthetically transform a machine without compromising its performance. It’s a delicate balancing act that calls for a markedly more time and labor-intensive design and development process, though it allows for a unique marrying of form and function that’s more typical of most high-level race shops that bespoke bike builders. And though they aren’t the only shop to employ this formula, exceedingly few do it better than South Korea’s Crazy Garage Custom Bikes.

Headed up by Chi-Hyun Kim,  the Busan-based builder’s been in operation for more than a dozen years now and in that time has amassed a track record of delivering stunning custom builds backed by genuine race DNA, from modern 1,000cc superbikes to big Harley V-Twins. So when Deus Ex Machina’s South Korean operation was looking to build a competition-grade dirt tracker to commemorate the “domestic landing” of the Deus flagship store in the region, it turned to Kim and his crack team.

A previous-generation Kawasaki W800 was selected to be the basis of the project, with the air-cooled vertical twin serving as the perfect centre-piece to construct a tracker around. In typical fashion, Kim and the gang started by exploring how they could go about extracting more power from the Japanese-made British twin clone.

This ultimately came in the form of an airbox delete and the addition of a pair of velocity stacks, along with a competition-style pair of single pipes following the lines of the steel double-cradle chassis back, under the engine before exiting out on the left side where the stainless steel system culminates in a set of custom cans complete with a bespoke Crazy Garage emblem. A Dynojet Power Commander V was also introduced to help optimize the new hardware and airflow, and the increased oomph is now fed through an FCC clutch.

Right out of the gate, Kim knew the W800’s stock suspension would be far from adequate to achieve the kind of performance he had in mind. So, the factory pieces were pulled and the non-adjustable, non-inverted front-end was replaced with an upside-down, Showa fork – now slotted in Ducati triples — and the original rear shocks were binned in favor of a set of top-shelf Ohlins items, both of which are fully adjustable. The stock wheels have also been swapped out for a dirt-oval-appropriate set of 19-inchers front and aft, powder-coated in black and shod in equally-tracker-appropriate Dunlop K180 rubber.

With the build now taking shape, CGCB turned its attention to the bodywork. Opting for a more traditional tracker aesthetic, Kim and his team have installed a classic number-board-equipped tracker tail section and a matching small capacity, flat-bottomed tank that leaves the W800’s frame neck on full display. The electronics are now hidden in a one-off tray beneath the sit, sandwiched between the new tail section and its race number-adorned under-tail panel. The seat consists of a thin black leather item with a grippy carbon-style saddle, red stitching, and smooth leather accents.

A traditional front number plate has been crafted from aluminum and used to cap off a low-profile housing that now accommodates an offset halogen-bulbed headlight set behind a yellow lens, as well as a sunken mini digital display and keyed ignition on the rider’s side. Moving slightly rearward, we have a set of ProTaper EVO tracker bars set in adjustable risers and fitted with top-shelf switchgear, new grips, and folding Brembo levers.

There’s also a set of toothed, off-road-style foot-controls and a Brembo 15RCS master cylinder linked to an upgraded caliper and petal rotor. An NHK steering damper was also installed on the left side of the frame to help keep things in check while getting sideways. Interestingly, the W800’s original rear drum brake remains in the mix for whatever reason.

Dubbed, the ““Wbarrels,” the build sports a slew of small, subtle touches that help push it over the edge. The passenger peg mounts have been shed and smoothed over and fork guards have been added for a more genuine competition-look. The velocity stacks are protected behind custom perforated covers and the bevel-gear-driven cam now boasts its own one-off cover. At the back of the tail, CGCB has installed a license plate eliminator kit and a pair of micro-LEDs hanging off either side, along with a tail light to keep things fully street legal when not going fast and left in the dirt.

Jackpot Custom Painting was called on to finish the job, treating the build to a bespoke race livery, seemingly drawing inspiration from Eddie Lawson’s racers (and production replicas) of the early 1980s and laying down a lime (or Kawasaki) green paint job with white and navy blue accents and race numbers all around. After its competition, the Wbarrels went on to be featured on the cover of the latest (August) issue of South Korea’s Motorbike Magazine, too.

Like all of Crazy Garage’s builds, the Wbarrels not only looks the business but is also capable of some serious hair-raising performance. It’s the shop’s typical recipe of merging the racing and customs worlds, as well as a love letter to the philosophy that all motorcycles should be built to be ridden. And that’s something that I think we can all get on board with.