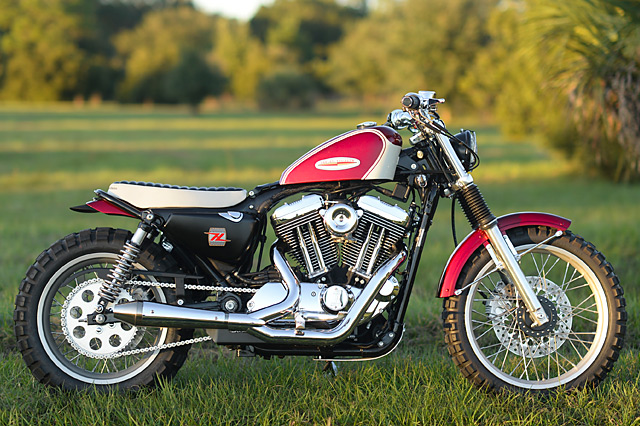 There’s something that always intrigues me about taking a Harley off-road. Like the James Bond Lotus that goes under water, or the Space Battleship Yamoto, there’s something unexpected yet just so very cool about the out-of-context-ness of the situation. For a bike that seems so much a part of America’s road culture, it’s off-road history is undeniable and despite the company’s current dirt shyness, it seems that the brand can do nothing to escape the call of the dust. In that spirit, he’s a man who really needs no introduction with a bike that probably does. It’s Hageman’s brand new Harley XL 1200 scrambler.

“It’s a ‘04 XL 1200,” says Monsignor Hageman. “I wanted to build it so that it would be practical, useful and connect to the roots of the Sportster. Back in their early years, they weren’t just considered a street bike like they are now. Guys bought them and rode them anywhere. You didn’t buy one bike for riding in the woods and one for the pavement; you just had one bike that went everywhere.” After doing a lot of research, Greg found a picture of a flat tracked ‘61 XLCH that caught his eye. He loved the look and it’s simplicity. It also had great paint and decal designs, so he chose it as inspiration for the build. “Originally, I had planned on number plates, tiny headlights and the rest, but I realized that’s not really practical for the road; they’d be more of a fashion statement than a useful addition. So I deleted everything I could while keeping the bike fully street-able with horn, turn signals and the like. My goal was to build a sportster that looked like a practical 1961 bike that had been transported forward in time.” [superquote] “The color the old XLCH inspired is a deep red candy flake with a gold base with off white accents similar to early Harley Birch White.” [/superquote]

The bike has Motogadget bar end signals, an LED headlight and taillight strip with some subtle, integrated signals. Then there’s the alloy Sun rims at 17×4.25 for the rear and a 19×2.75 front. After a bit of fussing, Greg chose Continental TKCs for the rubber. “Originally, I had planned on running some Avon Distanzias or Shinko 705s, but after riding with those on gravel, I found them both a little useless; it felt like I was riding on marbles. Great on pavement, scary off. Where as the TKCs work wonderfully both on and off pavement – but they are definitely not the off-road knobbies that many people assume they are. The seat is a throwback design to the aftermarket ones you’d buy in the AMF days; flat with a two-tone black and white colour scheme.” For the bouncy bits, Greg has had the front forks resprung, valved and preloaded properly to match the new rear Hagon Nitro shocks. He’s planning to list this bike for sale on eBay this weekend. “As always (and sometimes unfortunately), this is a business. I wish I could keep them all, but it’s probably time to make another rider happy and for me to build another bike while also making a living.”

Burnt dinosaurs are removed from the donk with a two-into-one exhaust and then through a mellow-chambered muffler. Greg reports that it won’t be winning ‘loudest bike’ contests, and he seems pretty OK with that. It also has an alloy skid plate in front and an easily removable bag on the left side. “It’s not a huge deal, but it’s big enough to hold a liter of water, or fuel, or a few tools for fixing your friend’s bike.” The bike weighs in about 480Lbs (215 kilos) with an almost perfect front/rear weight distribution that makes it handle pretty bloody well on and off-road. The pegs are in the stock location, but it’s using lowered Knight Design jobbies for a little more room. As you can probably see, it’s also been converted to a chain drive with gearing identical to the 883 model. “After reading the keyboard critics comments on my last Sportster scrambler, I took some of their advice to heart. Lower bars, Biltwell trackers, more seat cushion, a longer rear fender and a 4″ rubber extension on the rear to make it period correct. The speedo is up front and off to the left to move it as far away from your leg as possible while still being easily visible. Sure, this bike may not be for you. It won’t out handle or out perform a modern plastic dirt bike or road bike, but it does have what it takes to deliver lots of smiles. I don’t build bikes to ride to the extremes, because that’s not my riding style. I ride for fun and enjoyment. It’s like life – it’s not always a competition.”