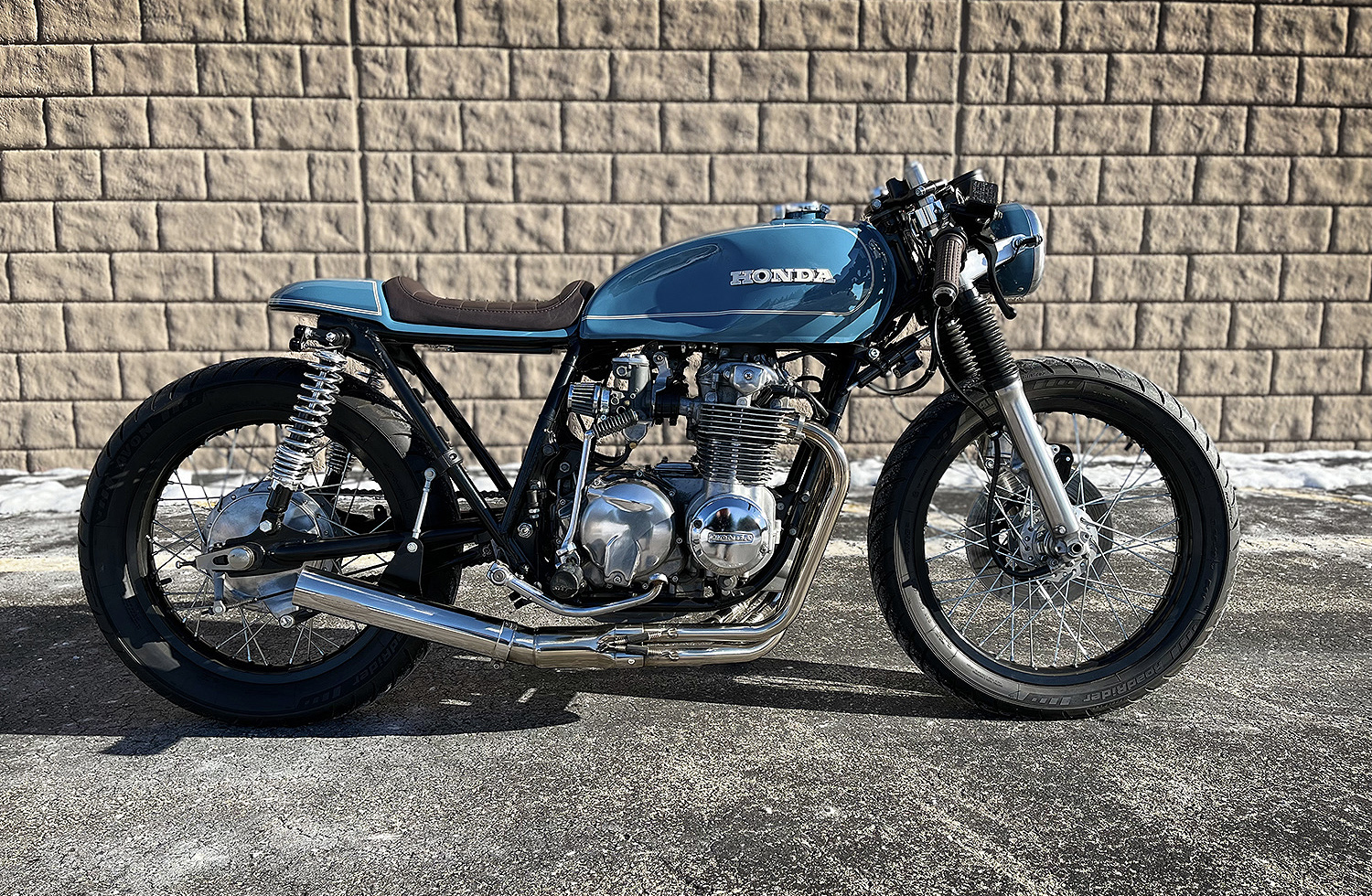 I remember the early days like they were yesterday, if yesterday I had no grey hairs, more sleep and not a care in the world. But when the cafe racer revival began, big dollar bike builds just weren’t a part of the scene. So it is with a refreshing feeling that we introduce this machine that was built to an incredible standard on a very tight budget. It should come as no surprise that its creator is a mechanical engineer, they can always solve a problem with a little or a lot. In this case, Mateusz Kubak of Illinois needed just $2,500 to put together this beautiful 1974 Honda CB550 custom, a champion out of chump change.

To get an idea of the sort of guy Mat is, he spends plenty of his spare time creating all sorts of unique projects, from custom bikes to electric skateboards and even a laser flamethrower gauntlet, “Who doesn’t want to be a superhero? Putting it on definitely makes me feel like one. It was fabricated out of 22 gauge sheet metal. The gauntlet shoots fire from my palm and a high powered laser from my wrist.” It’s cool shit, so it’s fair to say the bike is a little more restrained but definitely adds a hell of a lot of class to his garage.

To start the CB550 journey, Mat found himself a decent donor, not great, but the foundations were there. “When the bike was purchased, it had no electronics and no seat but a good engine and frame.” So with his 2.5k budget, he set about building a sweet classic bike that suits his riding style. The Honda was pulled apart and the frame modified with the clunky rear subframe cut off and a new item fab’d from steel, with a shorter look and a steel plate underneath to close up the gap. Then the rest of the frame was smoothed out and the unrequired tabs cut off.

One of the few outsourced jobs was then to have the whole thing professionally finished in a satin black powder coat. More metalwork was to follow with the stock tank given a reshape to add in a set of knee dents. Again with cost in mind, all of the handy work was done by Mat himself with a teardrop mallet to shape the metal. A seat pan was next on the agenda and fits over the frame flawlessly, easily detached with a clever locking mechanism. Then the tail unit itself was built using fibreglass and a neat cowl shape was achieved.

“The tank, tail, seat pan, and headlight bucket were painted with Rustoleum Nantucket Blue paint and then a 2K clear coat over that.” The subtle colour not only suits the style of the bike, but also the era it comes from and was chosen by Mat’s lovely wife. The twin pinstripes are a great touch to break up the single colour and join the old school enamel badges on the tank. To give a nice contrast, Mat had the seat stitched in a deep brown leather, for more of a vintage touch and the grips are in a matching hue.

Given the bike had come with no electrics to speak of, this allowed Mat the chance to start from scratch and design a brand new loom. All of which is centred on the all-conquering Motogadget m.unit, which is the brains of the operation. Everything is neatly hidden under the seat and allows for single wires to run the switches and then on to the array of lighting, from the bar ends to the headlight and the tiny indicators that all find a home in a way that doesn’t disturb the bikes classic lines.

The engine was a good runner, but they can always be given a hop up and who doesn’t like more power and a better sound. The first step was to ditch the old exhaust and fit the tailor-made stainless steel Delkevic 4 into 1 system. They not only look great but work brilliantly on CBs too, but to ensure the bike takes maximum advantage of their free-flowing design, the carbs have been rebuilt and then properly jetted for the exhaust and new pod filters. With the engine covers polished up, it really allows the classic Honda four powerplant to shine.

A big talking point will no doubt be the handlebars, they are in an extreme cafe racer position, but with the stock peg location retained, Mat tells us there is no added stress on the wrists. The multi-degree clip-ons allow for the extra angle and can be easily adjusted to suit any rider, personally, I love the aggressive style! To finish out the build, the suspension has been refreshed, a stabiliser fitted and the rebuilt wheels are now wrapped in quality Avon rubber.

It’s a great example of what you can do on a shoe-string budget and I hope it inspires others to show off their garage built grassroots customs; it is after all the foundation of who we are.