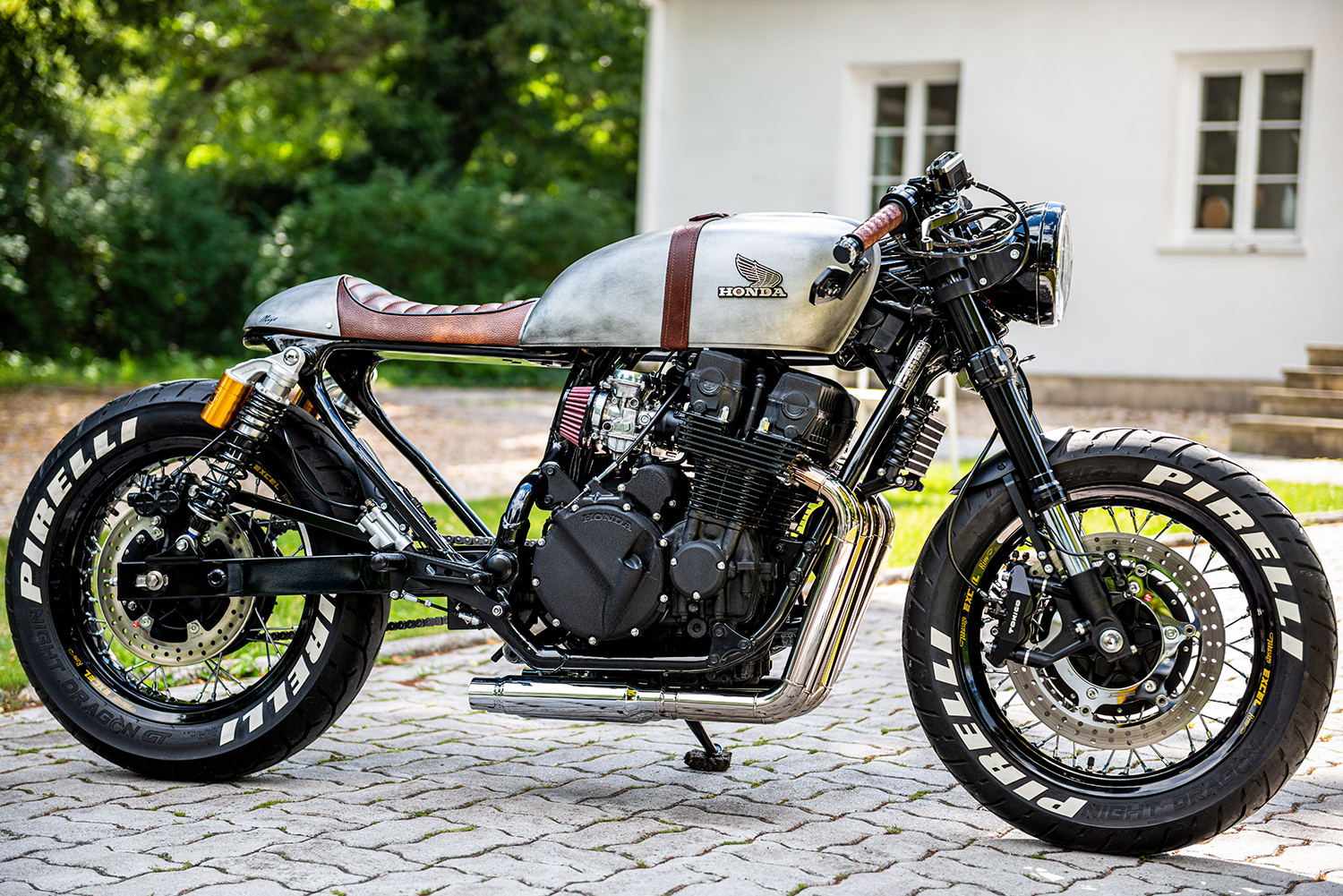 Since it was first released in 1969, the same year the Beatles released Abbey Road, the Honda CB750 has not only been one of the icons of the motorcycle industry, but arguably one of the most customised. From early race bikes and dealer hot rods, to four across the frame choppers and the cafe racer boom, the CB750 has been there all the way. The early SOHC and DOHC models have always been front and centre, but given their soaring price and old age, why wouldn’t you pick the lighter, more powerful, and easily more reliable RC42 of the ’90s? It’s a question YouTuber and builder KrisBiker didn’t have to think about for long. And his answer is this retro-mod cafe racer from a line of RC42s created in his Warsaw garage. Now complete, this bad beast is off to a new home, to take a large bite out of the Big Apple.

Real name Krzysztof Rogalinski, the man behind KrisBiker Custom Motorcycle Garage, has been documenting his work on YouTube for quite some years now. Until recently, the Polish builder focused on 100% authentic restorations, using as many original parts as he could possibly get his hands on. But the ever-present custom scene kept piquing his interest and there was only so long he could look on from the sidelines without getting involved. But rather than just grabbing a bike and starting to cut it up, he spent months carefully studying the designs and techniques of the best in the business.

Now with an idea of how he’d approach a custom build himself, it was time to look for a donor, and the RC42 line of CB750s just seemed to make perfect sense. His first build ‘Spider’ became an instant success in its slick yellow and black colour scheme and was shortly followed by a blue version of the neo-racer design. With the help of his social media accounts, the word started to get out around the world and an order came in from Brooklyn. An international sale is a huge success so early in a custom builder’s career and after speaking with the client it was decided that a more retro vibe would be infused into the design.

A donor bike was found, stock with that ugly tank and even worse side covers, and then it was all stripped down to a bare engine and complete frame. The motor went up on the bench and the chassis on the lift so that it could be attacked with the grinder, and all the metal behind the centre post has been removed. From here Kris has created a subframe with incredibly neat lines and one that ends abruptly over the back tyre with a simple hoop. This work means that an all-new rear master cylinder mount and battery box had to be fabricated before the frame and swingarm were finally finished in gloss black.

Getting things rolling takes us north, to the Ukrainian capital of Kyiv, where Gazzz Garage makes some mighty cool parts that include spoked wheel conversion kits utilising complete custom hubs and Excel rims. For now, these wheels will be the last he makes, as proprietor Nazar has taken up arms to defend his nation. Such special wheels deserve an excellent home, and a new axle connects the pointy end to a full K7 GSXR conversion, which consists of the adjustable forks, radially mounted calipers, and 310mm disc brakes. The special hubs allow for a disc on the rear too, and Ohlins piggyback shocks make for incredible handling.

One thing that has always turned people away from the RC42 has been the clunky tank and bodywork, and with that all thrown aside, Kris settles on CB550F tanks to give the modern CB a truly retro vibe. All striped down and the tunnel is cut and customised to allow it to mount over the backbone before it’s fitted out with a set of period Honda emblems. To match the look, the rear cowl is a simple design shaped from steel and the two pieces are finished in an old steel effect. An ultra neat distressed leather seat is stitched up and a matching tank strap and grips help to give the bike a little extra flavour.

Now Kris could turn his attention to that four-cylinder twin-cam engine and first on his radar was fixing some of the little problems that hamper an otherwise bulletproof package. To give it the right look, it’s all been bolted back together with a new stainless package and given a coat of satin black and crinkle effect finish. The exhaust is as brutish as the engine it serves, four individual pipes leave the head and finish under the engine with a collection of four hot dog style mufflers, all of which are polished to a mirror shine. The stock carbs remain but needed a serious re-jet with all that extra flow and now take their air from quad DNA filters.

To keep things looking clean meant an all-new loom, as the standard Honda’s huge side covers allow for some lazy factory wiring. A combination of Motogadget m.blaze turn signals and m.switch buttons keeps the front end tidy, and a Koso digital speedo provides all of the vital information to the rider. To keep them in maximum control, Kris opted to fit a set of higher rise clip-ons and then built a custom set of rear sets to really let the rider sit into the bike, rather than be perched upon it.

The final touch before boarding a Boeing to Brooklyn was to add the owner’s names in simple graphics on the tank, and the Spanish ‘Mijo’ on the tail – their darling son is ready to roll.