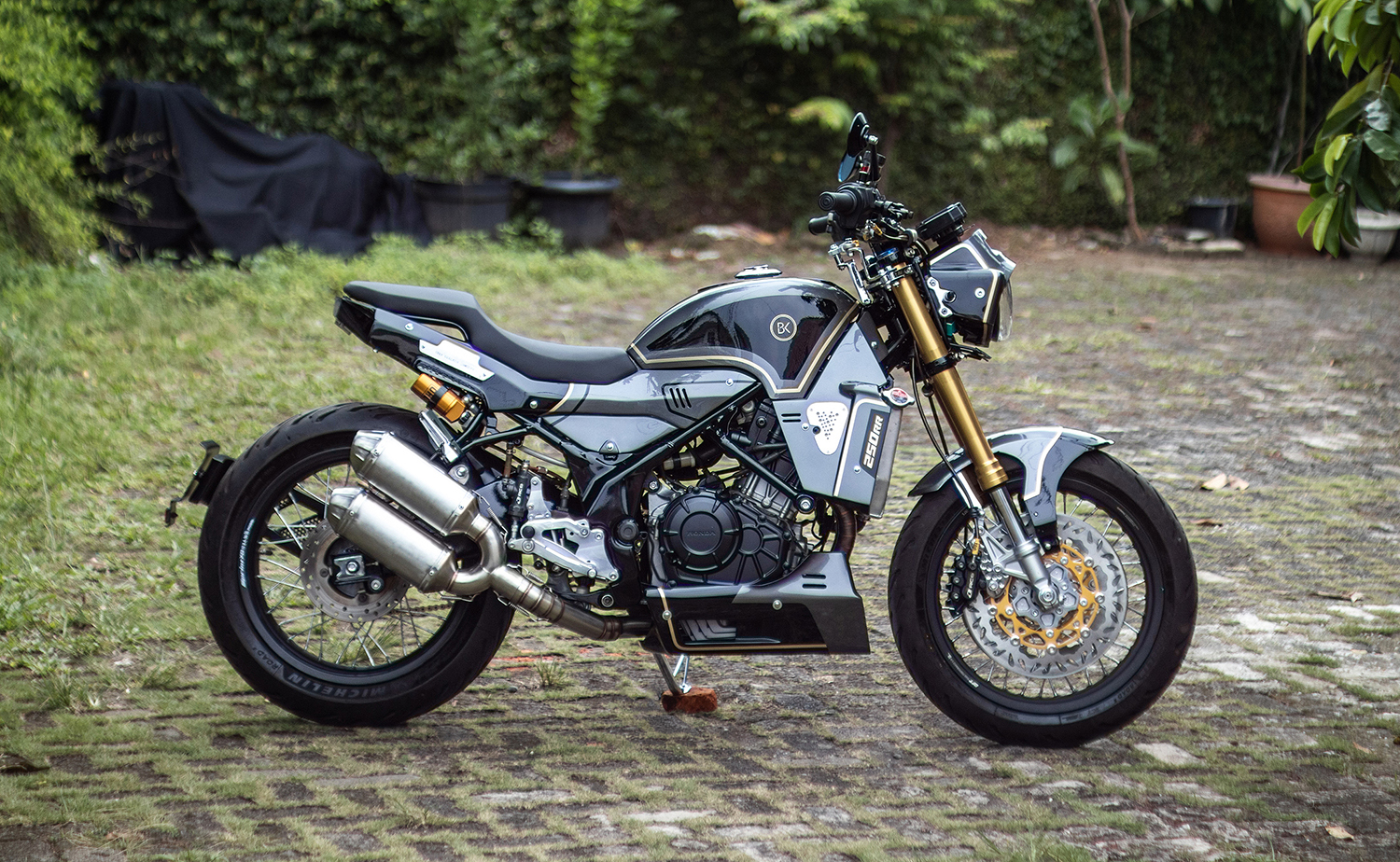 Those outside of Australia may not realise the close connection between the country and Indonesia as more than just near neighbours. The lyrics from an old song tell a small part of the tourist tale, “Got myself a Honda, had to get away, no brakes, bald tyres, five thousand rupes a day, I’ve been to Bali too.” Yes, going to a bike shop in Indonesia once meant being a tourist looking to hire a cheap Honda Cub for the day. But oh how times have changed, the bike shops in Indonesia now produce some of the best customs in the world, as displayed annually at Kustomfest. One of our favourites is Batakastem Workshop based in Jakarta and they’ve just finished this cool as can be custom Honda CBR250RR, to serve as a city tracker.

The crew at Batakastem is headed up by Abraham Simatupang, who is both the boss and the lead designer, and he prides himself on being able to build just about any bike his customers desire. But for their latest creation, the team wanted to do something to truly suit their surroundings and utilise a donor bike that is built right at home in Indonesia. Their backyard is of course the crowded streets of the capital Jakarta and thus the idea of a city tracker was born, truly designed to traverse the challenges offered up by a major metropolis.

The bike is the Indonesian-built Honda CBR250RR, a collaboration between local company Astra and Honda International, a fully faired sport bike, with a 40hp parallel twin engine, quality Showa suspension and a dry weight of around 140kg. That is a receipt for fun and with Indonesia’s racing pedigree growing and riders competing on the international stage, the large market deserved such a brilliant product. But while most treat it as a little superbike and dress it up as a race replica, Abraham saw the potential for a motorcycle that was more like a smaller and lighter Indian FTR, and he just had to bring it to life!

The first task was to remove all of the race-styled fairings, and this reveals a host of little tabs, brackets and other clutter that the manufacturer hid behind them. With all of this cleaned up, Abraham could start designing his own bodywork. With the design complete, it was soon evident that the stock subframe would never work, so an all-new item was fabricated, welded on and painted to match the frame. In full fab mode, the next item on the list was a complete one-off gas tank that has been shaped to create some beautiful lines, and yet still cleverly holds all of the internal EFI gear.

The rest of the bodywork is made in the same way, painstakingly hammering and rolling metal to form the desired shapes, offering it up to the bike and repeating until each piece was picture-perfect. It’s a process you have to love, and Abraham and the team pour their passion into the work. The front radiator cover and surrounds give the bike a very neat appearance, while the flowing side covers that become the tail section too, have an OEM level of finish. To give the bike back some bulk, a belly pan cups the lower half of the engine, while a custom front fender and slick headlight surround finish off the job.

The paint is all laid down in-house, with the black, dark grey and champagne gold theme the perfect fit for this tarmac terror. In signature Batakastem style, there is a number of hand punched aluminium plaques and to keep things clean, a floating style number plate holder is employed at the rear. Showing off their full set of skills, the guys upholstered the double seat in black faux leather and the pillion sits up slightly higher, with negative space incorporated in the mount below. To keep with the modern feel of the bike, a 7in LED headlight is used and the remainder of the lighting is all clear lensed.

But there is no point having a bike that looks this good if it doesn’t perform out on the road too, so the weighty wheels are changed out for aluminium Excel Takasagos in 17in front and rear, both featuring custom hubs. To further reduce the unsprung weight the beefy front twin discs were custom-made for the job and new brackets hold bigger calipers.

The handling prowess is just as impressive, with USD Showa forks utilised at the pointy end and a big dollar remote res Ohlins shock for the rear. Steering is controlled by a set of Pro Taper fat bars mounted with Rizoma risers to the machined top triple. And the package is finished off with an Ohlins steering damper and custom alloy rearsets.

Finally the boys wanted to boost the power output of the already dynamite 250cc engine, and with the model used in the Asia Road Racing Championship, there is plenty of knowledge out there as to how to get more out of the little lump. Breathing is the significant change, with a full custom 2-1-2 stainless steel exhaust system and high flow filter both added. The engine is tuned to make the most of the changes and then a big aluminium radiator has been slotted in with a handbuilt overflow bottle in matching alloy.

Everything about this bike is brilliant, it looks stunning and now with more power and less weight, it’s hard to imagine many other machines that could deliver such joyful speed in the tight back streets of Jakarta.