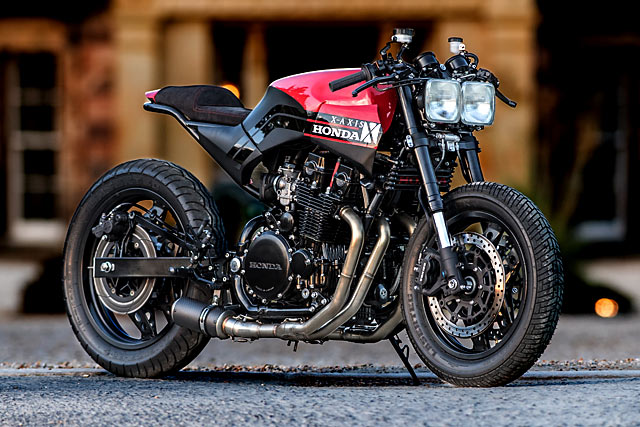 It’s easy to be in two minds about Honda’s original CBX750F. While its sharp but very 80s design recalls those of the Suzuki Katana and Kawasaki’s legendary GPZ900R, it also saw the end of the classic CB750/4’s 15 year reign. Now I think I’d be pretty much on the money if I were to say that most people reading this story wouldn’t think twice about choosing a CB over a CBX. Hell, I’d probably do the same. But nothing much ever happens when you stay in the middle of the road, right? So with this though in mind, UK’s X-Axis chose the cafe racing dark side. Here’s the results. 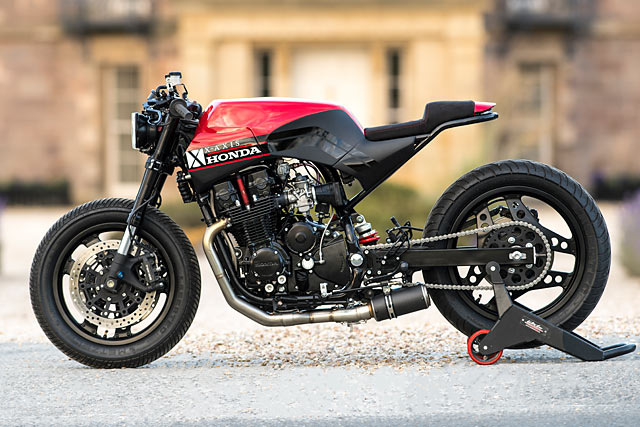 X-Axis is a custom motorcycle brand founded by former British motocross racer Billy MacKenzie. We recently picked his brains on life, racing and just what he saw in the Duran Duran of Hondas, the CBX. “I was lucky enough to grow up alongside the road racing Amor brothers in our local county East Lothian, Scotland and through our passion for racing we became good pals and professionals in our different disciplines. The racing life is only a short one in terms of career, but something Keith Amor and I were both lucky enough to get a taste of and enjoy. With our racing knowledge and experience in set up and race craft, we put our trust in younger brother Guy for the mechanical side of things. 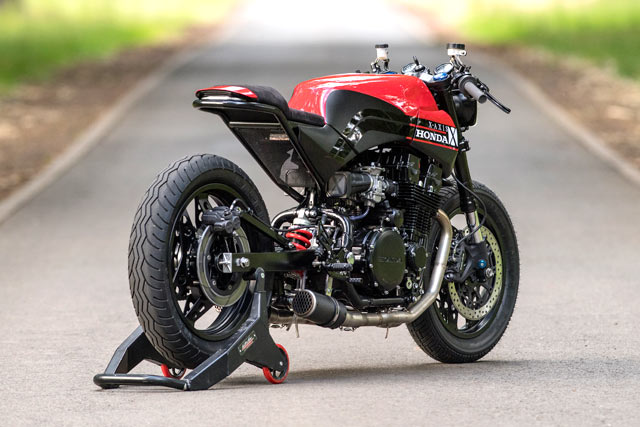 Then things got serious for X-Axis over winter. They upgraded their workshop with a new engine room, vapour blasting both, powder coating line, acid dip tank and even a shot blasting service. “Many builds we see take too long to complete because the dream is there but the tools are not. Finding all of the services required for a custom build sometimes just takes way too long and the dream is forgotten. To help speed up our own builds and also to help other bike owners finish their dreams, we are now offering a one stop shop, customisation and mechanical set up.” 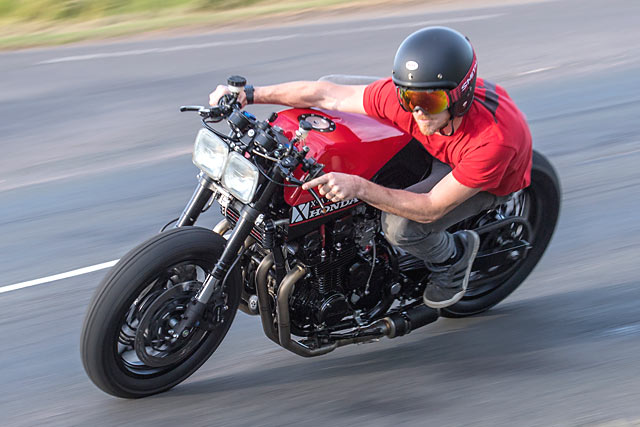 The cafe’d Honda CBX750 build started when Keith – who has raced at the IOM TT – persuaded Billy to buy the CBX instead of the older CB model. “Of course, the CB was popular amongst builders at the time because of its easy conversion into a cafe racer, however the CBX had more potential and we were really ready for a new challenge.” And with results like this, we’re pretty sure they made the right call. As tradition dictates, the first modification on the CBX was to completely remove the rear subframe. “It was super ugly and pretty much impossible to save; it was also a big change from the smooth, straight lines and geometry of the previous CB model.” 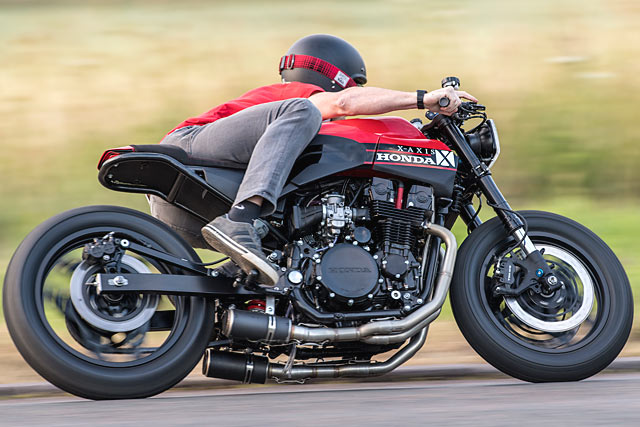 “We designed the new subframe to match much more closely that of the main frame. I looked for symmetry, height and length with a vision of a cafe racer-style rear cowl to work in harmony with the CBX fuel tank.” Billy designed the subframe to be more aggressive but also to bring a nice, finished shape to the rear of the bike. “Everything about the CBX screamed potential but it is an old bike with lots of clutter. I love the style of the older bikes but we wanted this bike to perform alongside the current Honda models, too.” 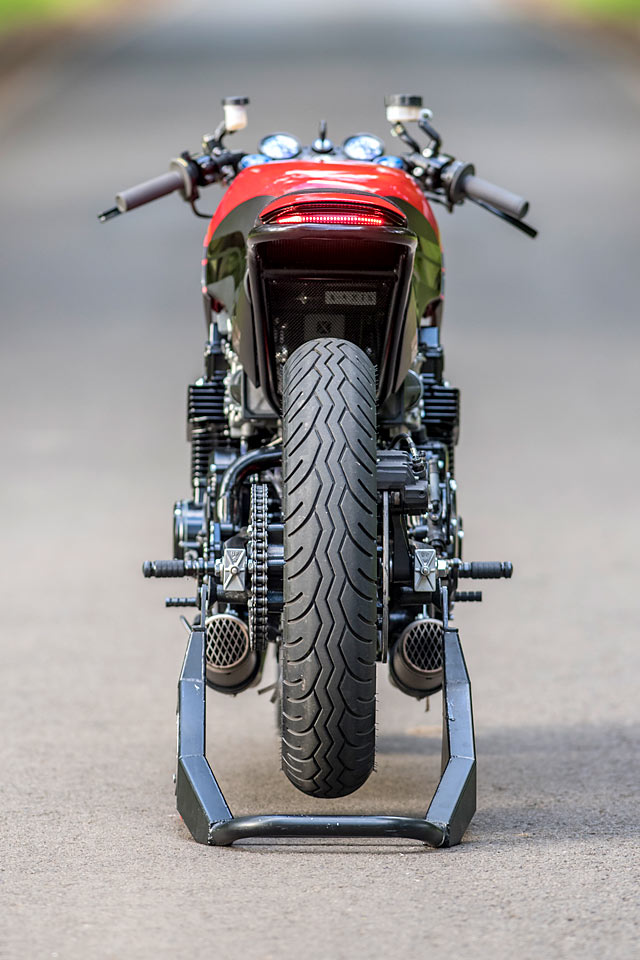 [superquote]“For us it’s important to keep our builds classy and original while keeping performance and handling a priority.”[/superquote]

Next they lost all of the front fairing and associated guff, keeping only the essential original Honda parts to make for a very neat homage to the original CBX twin headlights. The front end is an upgrade from a 2014 CBR600 for maximum cornering performance. “We had to measure and machine a customised front frame tube stem and then machine down the original 16 inch front wheel to fit the upgraded CBR600 callipers and discs. For us it is important to keep our builds classy and original while keeping performance and handling a priority. There is no point in having a bike look this good if it does not ride and perform well.” 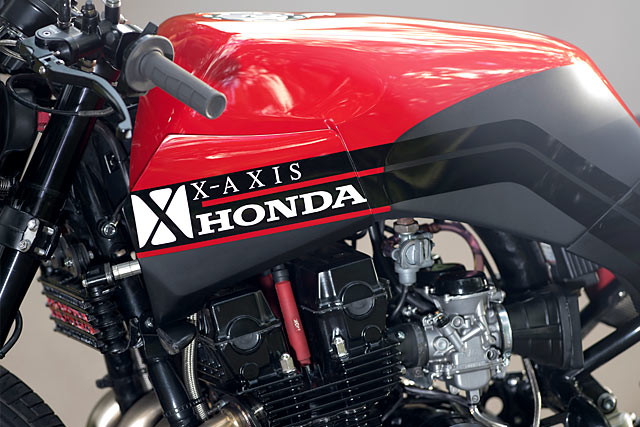 The CBX engine was completely split and rebuilt by their Chief Engine Technician, good friend and professional TT racing mechanic Guy Amor a.k.a. Keith’s brother. “The rebuild of the engine was immaculate. It has been built to last the test of time; probably better than the Honda factory itself. All new bearings top to bottom, fully blueprinted including a lightened and balanced bottom end, new pistons, rings, bearing shells, clutch and NGK spark plugs. We allowed for much tighter tolerances than the mass-produced production engine and with Guy on the tools, I can confidently say it is one of the best CBX engines around.” 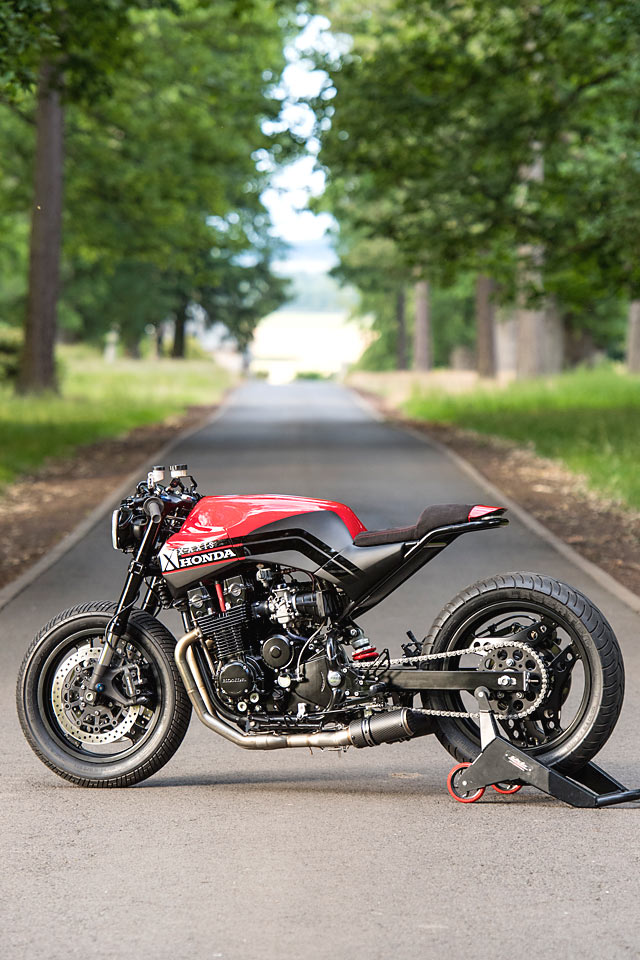 The Honda’s exhaust system was custom-built by DEP pipes, a company that supported Billy during his entire MX career. But finding the right rubber for the build was a little more challenging. “The 16 inch front wheel meant our options were limited. We ended up using Metzler Lazertec front and rear, which was the original choice of many CBX750 owners. For me it keeps the bike stable in most situations.” Another impressive feature of the CBX is the high quality race loom. “A complete rewire was essential to keep the cafe looking neat and tidy. A Motogadget M-unit is tucked very neatly under the seat. Wires, marine connectors and cables are all cut to size, soldered, heat shrunk and positioned so as to be super accessible for cleaning and maintenance.” 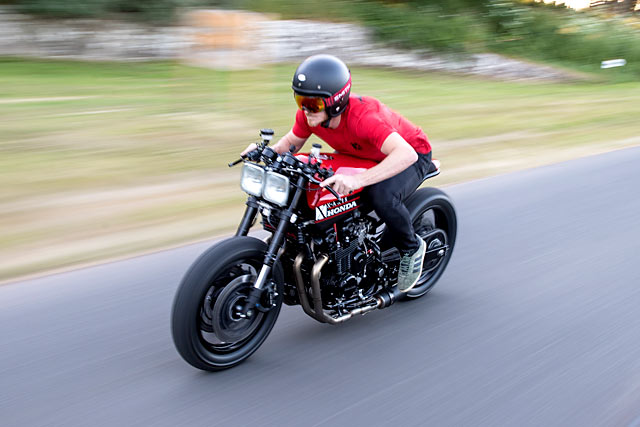 “I was inspired by some of my favourite 80’s supercars, like the Ferrari GTO 288 and the Testarossa. Cars I would dream about as a kid but never have the balls to buy now. I looked at the flowing lines of the fuel tank and wanted to complete the rear end design to complement the natural lines, width and height of the Honda tank. The rear ‘spoiler’ has a built-in LED brake light and indicator strip and the layered fins are a little reference to the rear lights of the Ferrari Testarossa.”