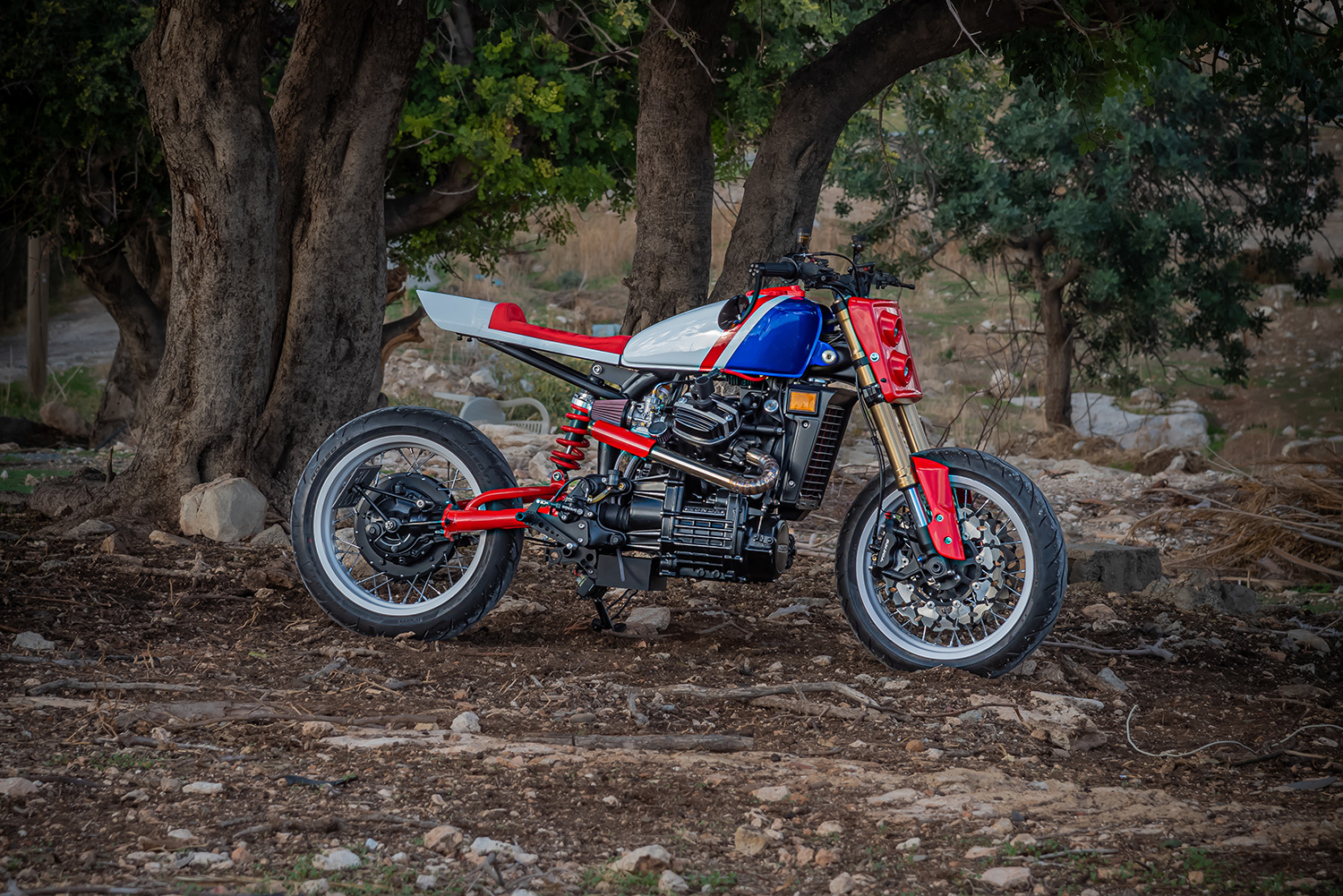 It’s well known around these parts that I have a twisted addiction to the mighty plastic maggot, the truly unconventional Honda that simply gets under your skin. Maybe to understand why, you have to have owned one, ridden one, and experienced their undeniable loyalty to their owners; never leaving you stranded on the side of the road, even when they’re on their last legs and forty years old. One man who truly gets the CX500 compulsion is Petros Louca of Underground Custom Cycles, who has built some of the best. So even when he discovered this CX400 in terrible condition, he just had to have it, and has given it an almighty makeover.

Working away in his workshop in the beautiful seaside city of Limassol, Cyprus, Petros got a call from a friend who heard there was a CX for sale. Turns out it was a CX400, so not his favourite version, and it had been sitting for years in the rain, but hey, you have to look right! “As I was inspecting the bike I noticed a bottle cap covering the right cylinder, we remove the cap and noticed there was no spark plug in the cylinder and I thought maybe she is not stuck (no chance) but I always find an excuse to buy a bike.” he laughs.

With customer bikes to focus on, crazy world events, and life’s usual journey, the old 400 sat for a while before Petros had a chance to give it his attention. But he knew he wanted to build a bike that was as good on the open road as it was in the Cypriot mountains, and the HRC colour scheme has always been a favourite. So, finally, the bike was torn down and the frame attacked with the grinder, removing the entire subframe. A slick new replacement was crafted, the swingarm converted for a mono-shock conversion, and also modified for some additions to come. He also modified the tank mounts, so it would sit 30mm further back, to allow for more handlebar clearance.

Those bars sit in a riser and custom top clamp combo from our friends at Cognito Moto. Their kit also allowed for the fitment of vastly improved front forks from a K6 GSXR that have been refurbished. Further down the fork legs, Petros converted the bike to run a set of massive Suzuki Hayabusa discs and radial Tokico calipers for an epic braking package. At the back end, the bike now runs a single Kawasaki shock and the brake is a disc package from a Yamaha R1, no messing around here! The Comstars are gone, and the wheels converted to spoked items in a 17in diameter, the notched swingarm now accommodating a big 150 section tyre.

Now that he had a dynamite roller, it was time to pull the engine apart and see how much damage had been done sitting unsealed in the weather. Sadly, Petros’ initial instinct was right, the piston in the exposed cylinder was stuck. So it was time for a full rebuild and he sourced a CX500 crank, rods and heads from Germany. The pistons were found on eBay, NOS +0.50 items with rings, the price, eye-watering! Next was to convert the 400 to a 500, “We made custom piston sleeves in order to fit the +50 pistons and rings, new valves, gaskets, stator, water pump, basically every component in the engine is brand new!”

The outside of the engine is no less impressive, with all of Petros’ knowledge thrown at it to deliver the perfect package. Fuelling is provided by a set of modified and tuned Mikuni VM34 carbs, with a pair of DNA pod filters. The ignition system is brought into the 21st century with a complete kit from Rae-San, that also uses a rarely seen coil over plug conversion from the very smart folks at Murray’s carbs. The exhaust is brutal, two individual header pipes that end right near the centre post of the bike, but wisely they’ve been fitted with double silencers to keep the sound pleasant. Petros did keep the CX400 gearbox, its close ratios bringing the big block to life.

With one hell of a mechanical package now sorted, it was time to give it the full HRC make-over that had always been dreamed of. The start of the look comes with the new front mask from C Racer in Greece that gives a unique flat track vibe. At the opposite end of the bike, an all-new tailpiece has been hand shaped to pick up the lines of the new subframe and end with an aggressive upsweep. The front guard has been cut down to protect the fork legs, but to still give a minimalist look. With a set of exhaust covers and battery box, all fabricated in-house.

The red, white and blue is then laid down to perfection, with the rearwards shifted tank looking a million dollars, after being rescued from a decade in the rain. The lighting package is all LED and helps with the modern look and weight saving, which is further assisted by a complete re-wire based around an m.unit. All CX owners will know what a mess the stock system is, so the switch blocks and everything else in sight have been replaced. A set of quality levers and a radial master cylinder finish out the bars and custom rearsets get the feet in the right postion. Now all that’s left to do is for Petros to mount his steed, get comfy on the Alcantara seat, and head for the hills. This is why we love a great CX.