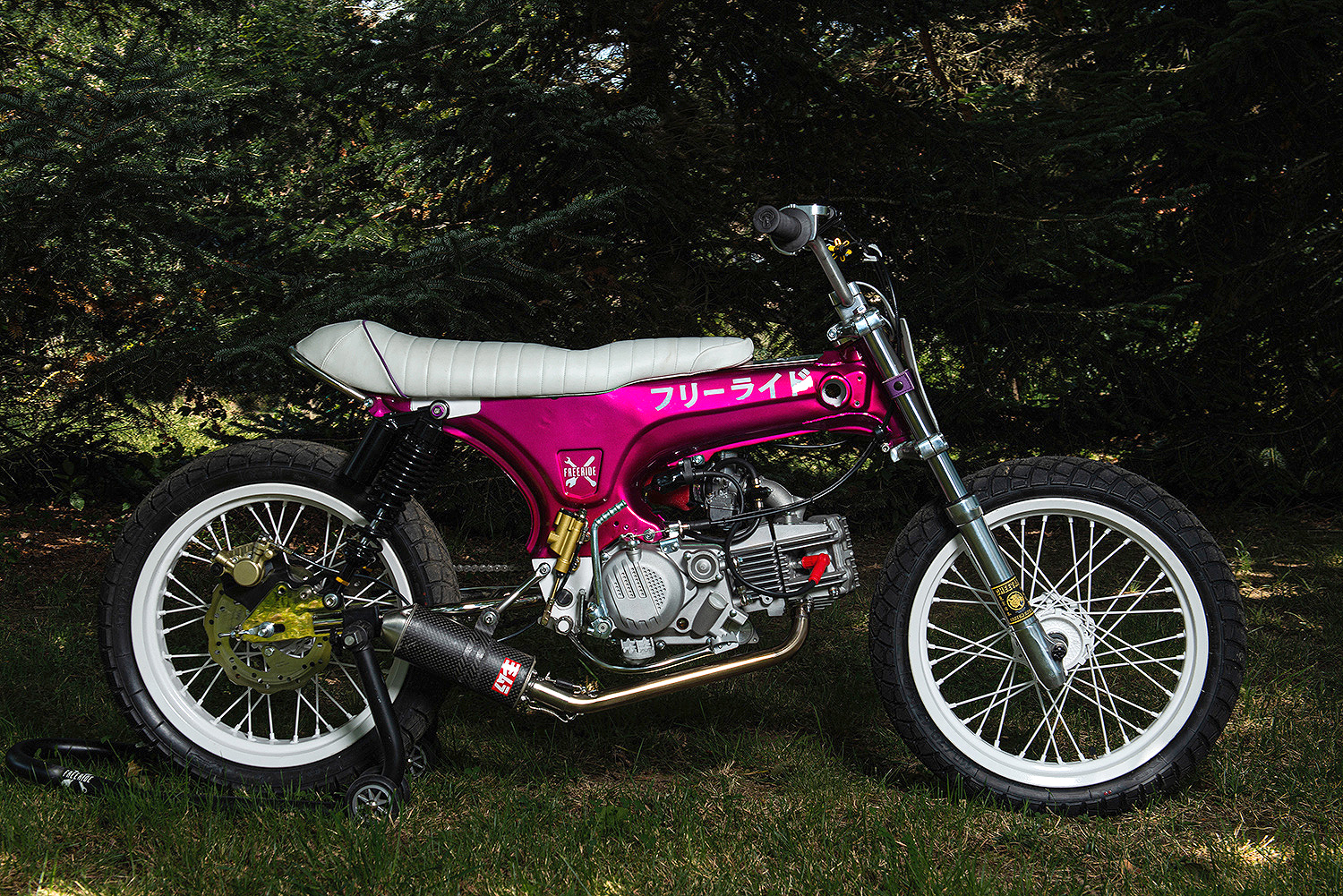 For the last eight or so years, France’s Pierre Dhers has been churning out one-off builds under the banner of Freeride Motos Racing. On top of the immaculate and well-executed nature of Dhers’ bikes, the shop’s work is made all the more impressive by its immense and diverse range of projects, having previously completed everything from vintage scramblers to competition-grade supermotos to modern superbike-based cafe racers. And for his latest build, Dhers is further diversifying his custom moto portfolio with a surprisingly involved little Honda Dax flat tracker that maintains Freeride’s high standards for performance.

Though completed this year, the tale of this Dax-based tracker actually began in 2019. At that year’s Wheels and Waves event, Pierre met Kousuke “Baka Musuko” Fukuda and Kazuo Fukuda (of Cheetah Custom Cycles and Buddy Custom Cycles fame), where the Japanese father and son builders campaigned one of Freeride’s Suzuki 450 RMZ racers in a flat track event. After they’d flown home to Japan, Pierre maintained a relationship with the Fukudas, occasionally messaging and routinely keeping tabs on Cheetah and Buddy’s social media channels. Fast forward to 2021, and after seeing a series of “Dax-Trackers” on one of the shop’s Instagram accounts, Pierre instantly fell in love with the idea and promptly set out to build his own.

To kick off the project, the diminutive donor was stripped down to the frame — one of the few original parts to remain in play on the completed build. From there, the stocker’s front-end was removed and replaced with a more contemporary pit bike fork slotted in custom triples. The original swing-arm was also jettisoned before being swapped out with a Savanna Racing unit developed specifically for Dax track racing. To make the most of the new swing arm, Pierre has paired the item with an upgraded set of rear shocks.

With the Dax’s stock engine being severely limited on power, Freeride opted to install a 190cc four-valve Daytona engine that, while small, packs a much greater punch than the Honda’s original mill. The new Daytona thumper has also received an OKO carb and pod filter, as well as a custom stainless steel exhaust culminating in a carbon fiber Yoshimura muffler poking out from beneath the swing arm on the right side of the bike.

In place of the donor’s stock three-arm wheels are a set of spoked Derbi hoops shod in flat track-specific rubber. And while the Dax’s front brake is no more, the rear unit has been upgraded to a modern single caliper and disc arrangement. What’s more, the stock controls have been replaced entirely, with the original footpegs being removed in favor of toothed metal pegs and the factory handlebars being swapped for a set of tracker bars. The throttle has also been upgraded and in place of the factory clutch setup now rests a ProTaper unit.

Rather than doing the leatherworking himself, Pierre collaborated with Christophe Cannac of Atelier Akotabe in Southern France to whip up a bespoke ribbed white leather saddle with purple piping and a cut-out that exposes a custom fuel cap. Cannac was also responsible for the build’s bespoke front number plate, which is crafted from a combination of cowhide and alligator leather and is secured to the fork via custom leather straps.

Because the new seat’s humped rear end protrudes out over the stock chassis, Freeride has installed a small hooped and kicked-up subframe that perfectly matches the contours of the saddle. Underneath the new subframe is a custom under-tail cover that sports the same unique gator-skin pattern as the numbers on the front board.

The final piece of the puzzle would be laying down the build’s custom livery. Courtesy of Art Scratch Paint, the glossy purple paint digs are complemented by the Dax tracker’s white seat, wheels, number board, and script that translates to “Freeride” in Japanese. The bike also boasts a number of accented pieces such as the purple-anodized hardware securing the build’s upgraded rear suspension.

While undoubtedly novel territory for Freeride, the Dax nonetheless possesses all the major hallmarks that the French customs outfit has built its reputation on, with the Honda sporting an unmistakably clean and uncluttered appearance that’s backed by an array of high-performance hardware. Now all that’s left to do is go racing.