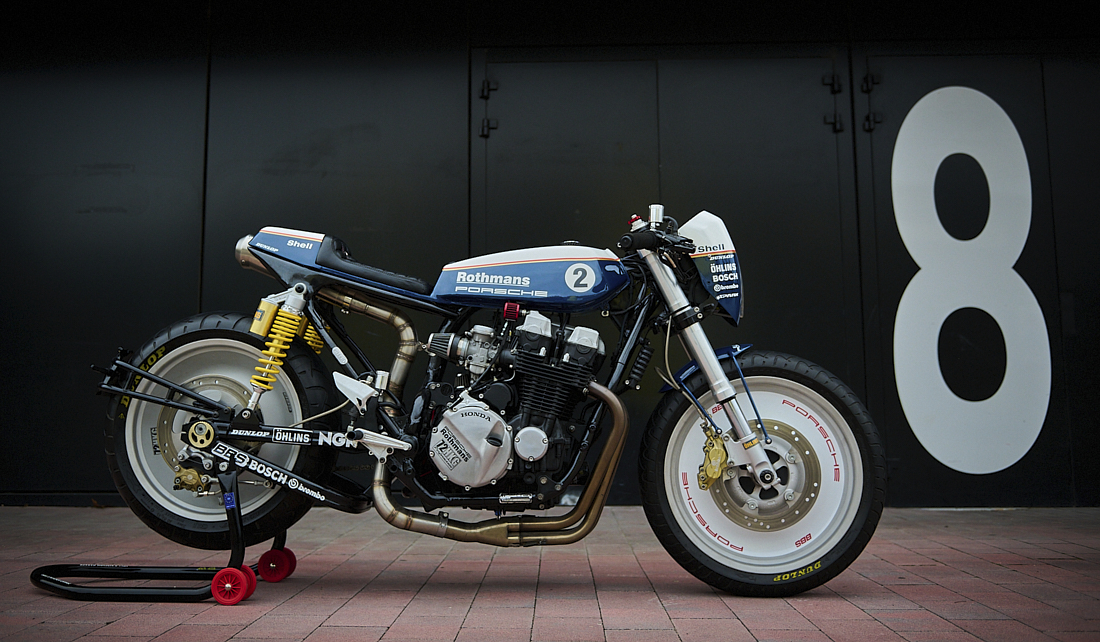 At just under 13 miles in length, the famed Nürburgring Nordschleife (North Loop) is arguably the most important race track in motoring history. It played host to some of the most memorable races in the early days of F1 and Sports Car racing and is now the ultimate conquest for supercar makers in their quest to lay down a record-breaking time. One particular lap of the circuit has always stayed vividly in the mind of bike builder Jorge, one half of Spain’s 72 HKG Performance, along with great friend Antonio. So, together they set out to pay tribute to the remarkable Rothmans Porsche 956 that lit up the German circuit and with a Honda CB750 as the base, they’ve captured plenty of that excellent ’80s excess.

As a way of background, the Porsche 956 was a Group C sports-prototype racing car built in 1982 for the FIA World Sportscar Championship. In 1983, driven by Stefan Bellof, the car established a record that would stand for 35 years, lapping the Nordschleife in 6:11.13, during qualifying for the 1000km Sports Car race. It was not until 2018 that another Porsche was able to top this record, an extraordinary feat, given the ultra-fast pace of development in motor racing. The tribute bike has been a personal project of Jorge’s, who along with Antonio, merged their custom bike building businesses 72 Cycles Performance and Hells Kitchen Garage into the operation that it is today.

Now with twice the talent on deck and finally some time to dedicate to the bike, the project could be completed to the standard it deserved. The basis for the build is the Nighthawk version of the CB750, still of UJM construction like the original, but with many modern improvements added by the time this particular bike came out in the early ’90s. The beefed-up frame with its large single curved backbone has been cut up so that nothing past the centre post remains factory. With some unique ideas for the rear end, this would require a completely custom-made subframe, which Jorge made using stock diameter tube for an ultra neat finish.

With such a cool race car as the inspiration, the factory box style swingarm just didn’t seem right, so a search was on for something that added a little extra wow! The solution has been found in the form of a Kawasaki 1000 piece, which has been adapted to suit the Honda frame and gets the look absolutely spot on. To control the rear end, a new set of upper shock mounts have been fabricated with extra supporting steel, before a set of remote res Ohlins shocks bolt on. These only further enhance the race style credentials, and the brake setup had to be the same.

So a quick change underslung arrangement was made, using a custom mount and stabiliser bar to support the Brembo components. To bring the front end up to speed a major shake-up would also be needed, the stock Nighthawk forks are pathetically small. With the steering stem retained and appropriate sized bearings pushed in, a full Suzuki GSXR front end is then mated to the CB and the fork legs themselves have been totally refurbished to ensure perfect looks and operation. Like the rear end, braking is courtesy of Brembo and semi-floating drilled discs.

To give the look of the wheel covers of the Porsche 956, a set of completely solid V Rod wheels have been masterfully adapted to suit the Suzuki front and Kawasaki rear end. To further match the race car, the centres have been painted white and finished in the Porsche and BBS logos. Running with the 956 theme, a monocoque-styled body was next on the list and doing away with the stock bodywork would also prove to be a great weight saving. The narrowed subframe now sports a small and stylish tail section that has been hand shaped from metal.

This then seamlessly merges with the little fuel tank to create a single-piece body that drops over the backbone and is easily removed. The tank itself is from a much smaller CB Honda and allows the big four-cylinder engine to really dominate the landscape. A small blade style front fender hovers on custom mounts over the tyre and a rear fender and number plate holder mount to the swingarm. But it is the headlight surround that helps to give the bike its signature look, the vertically stacked LEDs projectors shine through a full face mask for an imposing appearance.

The guys wanted to further integrate the visual and mechanical package as they’d done with the wheels, and the exhaust system plays a major role. The four header pipes collect under the bike, before snaking as a single piece under the seat and emerging from a muffler out of a relief in the tail. The electrical system has also been modernised with a host of parts from Motogadget and Koso and there was just one thing left to do.

The paint and graphics package is the perfect replication of the now banned tobacco sponsorship days and the vintage racer seat finishes fabled theme. Loud, aggressive and over the top, the Honda exudes the essence of ’80s racing and Jorge now has the ride to match those famous memories.