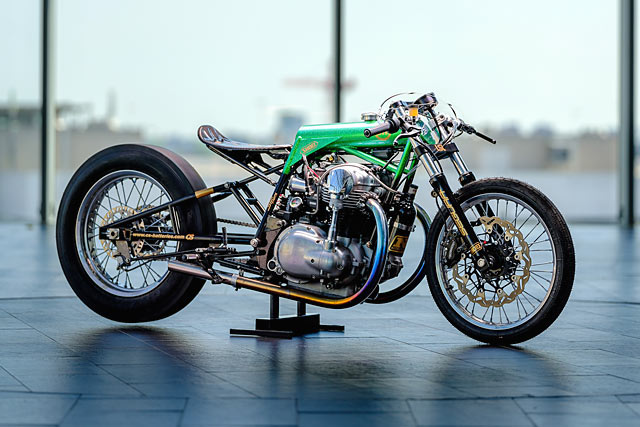 Insanity comes in many forms. It can be the drooling, yelping, crud-caked guy shouting at street lamps outside your 7/11 at three in the morning. It can be cruel megalomania, bright static head noise or political psychopathy. But the best kind of crazy is Tom Thörig from Schlachtwerk, who corralled some of Germany’s finest craftsmen into helping him produce this – an amazing Kawasaki W650 dubbed ‘Wasabi’ that’s built to tackle our favourite short-distance drag race series, the Sultans of Sprint. You should know about the Sultans by now. But if you don’t, here’s a quick rundown. A mad bunch of Europeans get together for a race series across Europe every few months. While the ⅛ mile sprint is the centre of the action, extra points are awarded for bike presentation, elan and scaring the hell out of the race marshals. There are two classes, and this W650 is destined for the air-cooled twin series up to 1600cc. And if you rack your brains for what the competition could looks like, you’ll start to realise what a feat it is for Schlachtwerk to put together a competitive Kawasaki W650. The mild W650 is the equivalent of bringing a knife to a gunfight. ‘A 1100cc Ducati 2 valve engine is going to be a lot stronger,’ Tom says, ‘And with a lot more potential for tuning. 130HP without nitrous and 200HP with it is not an issue with that’. But, dear readers, Tom has a plan. ‘Power isn’t everything. There’s also weight,’ he declares. And he’s also a sucker for Kawasaki’s famed retro ride. ‘The W650 and W800 engine is a classic beauty, so modifying one wasn’t a hard decision for me. I just wanted to build the fastest W650’. And to do that, Tom required help. If you’re in the W650 ‘scene’ you’re already raising an eyebrow at that statement. Because Tom doesn’t need help. Over the last ten years he’s carved out a tidy niche for himself on building the most beautiful, performance-oriented builds based around Kawasaki’s glorious bevel-driven twin. So when the man starts saying he assembled a crowd of some of Germany’s best builders, Avengers-style, to help him out you should sit up and take notice. Enter stage right metal fabricator Stefan Trautman. He designs and constructs washing machines for Miele, and he was the guy that Tom turned to for his new, ultra-light frame. Because if he can’t win in outright horsepower, he wanted to make the bike lighter. And this bike is very, very light. The frame, which is essentially based around the centre tube, is ultra lightweight, stiff and requires no external fuel tank. It holds 3.3 litre of fuel and weighs… drum roll please… 7.3 kilograms. I’ve taken dumps heavier than that. And it’s glorious – functional and carefully considered to still expose the beauty of the engine. Stefan certainly didn’t make a Miele of the design. Suspension wise the front end runs W650 front forks shortened by 100mm in LSL triple trees which pushes the front steering angle at 58 degrees. The rims come via KTM and have a 320mm brake disc with four pot caliper to really haul the bike up at the end of the 1/8th mile sprint, where Tom plans on getting the bike up to 175km/h.

[superquote]“So Tom called on another friend, Ulf ‘The Engine Whisperer’ Penner to really get the bike hauling.”[/superquote]

But how to get up to that speed in such a short distance? Now I love the W650. It’s reliable, it’s beautiful, it’s exceedingly pleasant to ride but in no way is the undersquare, air-cooled, slow revving grandpa-tourer designed for sprint racing. So Tom called on another friend, Ulf ‘The Engine Whisperer’ Penner to really get the bike hauling. The engine itself is a mashup of W650 and W800 components. It has forged racing pistons taking it to 855cc’s, a new cam, ported head, bigger valves and Carillo rods. All extraneous parts were removed, including the balancer shaft. Which means the engine is 9.5kg lighter than the standard unit, despite using the factory electric start. It’s a lower compression than usual, because of the wet nitrous system which comes via Nitrous Express, married to their Maximizer 5 control unit. The whole thing breathes in through 36mm Dellorto roundslides and barks out through a 2-2 titanium exhaust. While we’re talking about weight, it’s worth noting the complete exhaust system, including the connection pipe, runs at 1750 grams.

Incredible. It’s important it this juncture to take a nod to the sponsors of the W650. Shoei Europe, LSL Motorradtechnik, Segura and Skillskin leathers, CS Batteries and Nitrous Express Deutschland. And of course Ulf and Stefan. Without them, we wouldn’t be able to feast our eyes on this rolling case for a mental health sectioning. Bonkers, the lot of you. The end result of all this engine work in a frame that weighs less than an American hamburger? ‘It feels like you’re riding a cannonball,’ Tom Thörig says. ‘It’s loud and the vibrations are really noticeable. Under full throttle you have to keep an eye on the revs as the limiter approaches fast!’ And compared to the host of other Kawasaki W’s he’s built? ‘It doesn’t compare. It’s raw. It’s loud. It’s a boys toy. A very dangerous toy’. I’m curious to see how it goes in the 2018 Sultans of Sprint. But I’m also curious about what else he has planned – because Tom is wants to build another W650 like this – but registered for the road. He’ll definitely able to outrun the men in white coats with that one.